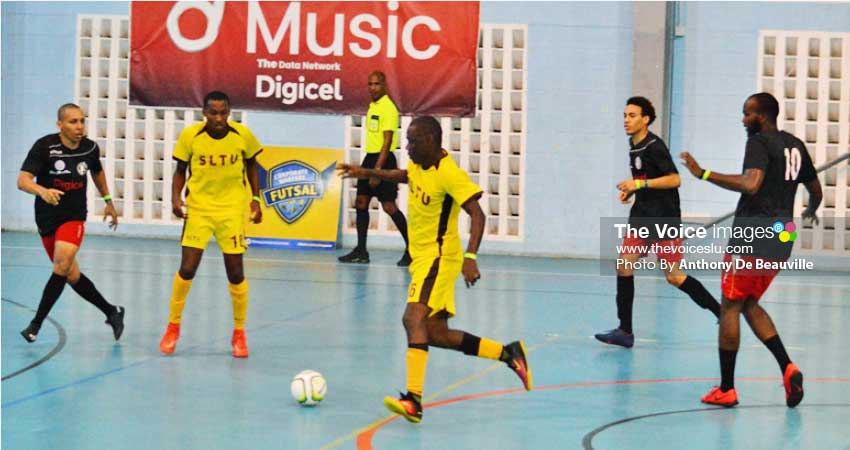 THE 5th edition of Corporate Warfare Futsal (CWF) tournament staged by Timeout Entertainment will continue on Friday 13th September at the Beausejour Indoor Practice Facility (BIPF) with four exciting matches on centre court. With four teams set to compete Friday evening, patrons coming for the showpiece have to be early to get an optimal seat to take in the action.

From 6.30 p.m., The Ministry of Infrastructure takes on Legal Team; Small Business plays Top Ranking Electrical at 7.30 p.m.; Builtec meets KM2 at 8.30 p.m. and Flow turns things up a few notches against Ferrands in what is expected to be an exciting catching matchup at 9.30 p.m. to bring the curtains down.

Meanwhile, twenty eight goals was scored on the opening night (Saturday 7th) with much fanfare in front of an appreciative crowd at the BIPF with four matches being staged, and with a record four hat tricks being registered on the night.

In one of two exhibition matches played on the night, Elite out of Micoud disposed of BSJ of La Croix Marigot 8 – 1.

Sherman Jn. Charles was the lone goal scorer for BSJ in the 21st minute.

In the tournament’s first encounter, Civil Service defeated their employer GOSL representative team 5 – 1. Dalvin Raymond registered a hat trick in the 13th, 21st and 37th minute with Jn Mill Augustin and Janai Clifford scoring the others in the 25th and 36th minute respectively.

Jay White pulled one back for GOSL in the 30th minute.

Game No.2, New comers Velox made their intention clear when they taught Bankers Association a lesson in consolidating their reserves with a 6 – 2 thrashing.

Raheim Alcindor led the way with a hat trick in the 10th, 12th and 26th minute, while the transaction was rounded up with one goal each by Shandel Alexander and Andrus Remy in the 7th and 24th minute, respectively.

Nale Alexander was unable to balance things off for the Bankers despite goals in the 19th and 29th minute.

In the closing encounter which featured the second exhibition match, Teachers All Stars demonstrated good discipline to edge out the visiting Kosmos Futsal out of Martinique 3 – 2 in a highly entertaining fixture.

The goal scorers: Lynch Isidore in the 10th minute, Alex Joseph in the 35th minute and Nehemiah Wilfred in the 37th minute.

For Kosmos Futsal, the goals were scored by Antonio Buchet in the 10th minute and Luigi LecurieuxLaf in the 15th minute.

TimeOut Entertainment congratulates Civil Service and Velox for making it to the next round of the knock out phase as automatic qualifiers of the Group Stage of CWF 2019.

Lionel John, one of the individuals behind the CWF scene, spoke to the VOICE about the evening clashes and what is in store for patrons as the tournament progresses.

“The evening was an exciting one with four games played; the opening encounter saw two teams that were involved in TimeOut Entertainment’s community futsal initiative,” he said. “We saw it fitting to bring them in on the opening night of CWF to get a first-hand experience of what the game is all about and see the different level of play.”

He continued, “In the knockout stage of the competition, I was particularly impressed with the way first timers Velox played; I see some rising stars in their lineup and to culminate the evening was the very exciting matchup between the TimeOut Entertainment All Stars team comprising of all Teachers up against Kosmos Futsal of Martinique. I am very appreciative they took the trip to support and be part of the best meeting ever, Corporate Warfare Futsal. The collaboration with TimeOut Entertainment and Martinique will continue, so look out for more teams from the French island coming to Saint Lucia to play.”

In terms of the evening’s crowd, John stated, “The crowd was very interactive particularly with the final game, because they saw what Futsal is. It was a good crowd for the opening day as well.”

He added, “We have more exciting matches coming up. Futsal is a great sport and it’s very exciting; sports enthusiasts should all come out and support because there is continuous excitement, it’s end to end entertainment, if there is not a goal that is scored, there is a goal that is missed and that stimulates excitement and that’s what TimeOut Entertainment want to see leading to the final night on Saturday 7th December 2019.”