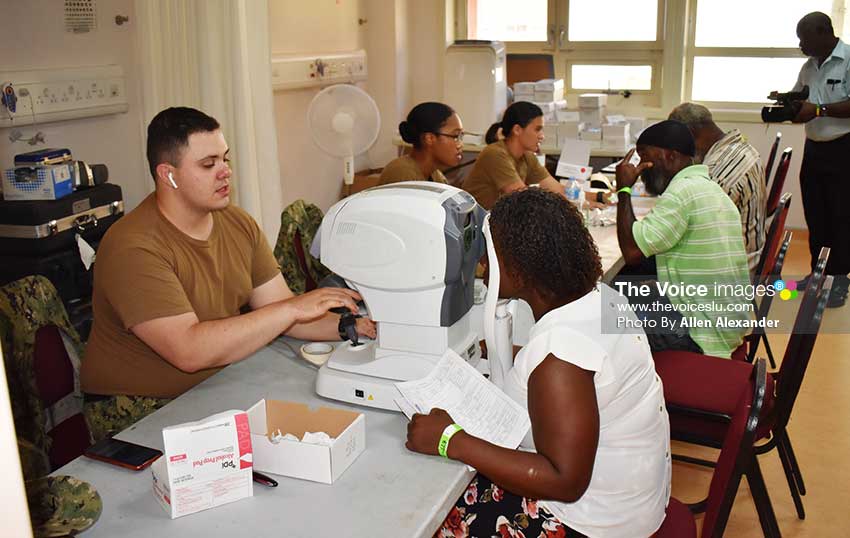 THE U.S Navy Captain of the USNS Comfort, Commodore Brian Diebold, has stated that the Comfort’s Humanitarian mission would not have been possible without the collaboration of the Government of Saint Lucia. Speaking at a local engagement this week, the captain stated that Comfort’s presence here was more than just a United States mission; it is in his words a joint effort between two nations. In spite of some of the criticisms regarding the USNS Comfort, Diebold said he and his team had heard nothing but positive things about the visit. He said the medical clinics at the National Cultural Centre and the OKEU were flooded with people on the first day of the mission (25th September). He announced that the clinic at the National Cultural Centre had to shut down early on the opening day since it had reached its full capacity very quickly.

More than a thousand people attended the clinics on the first day and many more will visit until the mission ends on September 30th. While the multitude of persons who showed up at the clinics proved the mission to be a success, the mission itself proved the state of healthcare in Saint Lucia to be at a very critical juncture. How many of the thousands who visited the clinics, were just lying in wait for something like this mission to arrive at our shores? The people who are hoping that the mission continues in the coming years seem to express little confidence in Saint Lucia’s very own healthcare.

Indeed, the state of healthcare in Saint Lucia is a matter of concern, and the list of things warranting immediate attention is vast. In some ways, healthcare in Saint Lucia seems to be at war and perhaps this is why there has been such a significant response to the U.S Navy vessel, particularly by persons in dire need of medical care that they simply cannot afford. It is a wonderful thing that the USNS Comfort has embarked on this humanitarian mission to Saint Lucia, but it also highlights a major need for a shift in how things are done locally in the health arena. There have been notable changes by the government, but we still have some way to go.

Let us hope that the humanitarian mission does not end with the departure of the U.S Naval ship. May our leaders themselves be inspired and moved by the zeal with which Saint Lucians have flung to those clinics for the medical assistance which they, and our country, have been lacking so long. With that being said, let us hope that all our medical institutions will soon be up and running for the goodness of us all.