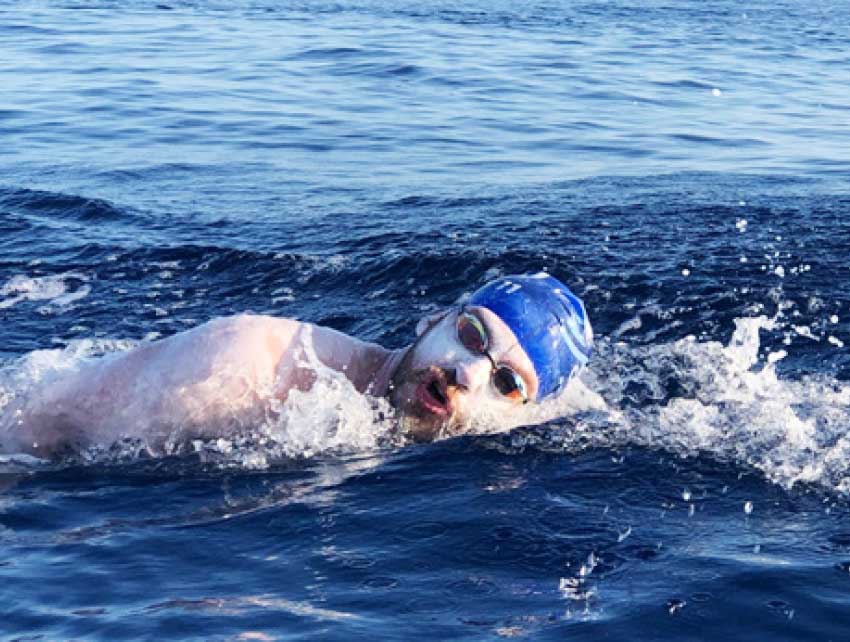 ON Sunday 15th September 2019, about 5.00 p.m. renowned South African ultra-endurance athlete, Cameron Bellamy, completed the longest recorded channel swim in history. He left the picturesque shores of the West Coast of Barbados at 8.20am on Friday 13th September, and arrived 56 hours and 26 minutes later on Saint Lucian shores, touching a rocky outcrop on the ragged coastline of Saint Lucia’s southern tip, after a harrowing finish to the 151 Kilometer swim.

Cameron has a long and rich sporting resume, having been awarded numerous world records in multiple sports. He was the 11th person in history to conquer the Oceans Seven (swimming’s equivalent of the Seven Summits), he has rowed across the Indian Ocean, earning 2 Guinness World Records, and, in November last year, swam around the island of Barbados, the longest circumnavigation swim in history.

Having grown up relatively privileged in Cape Town, South Africa, and noticing the inequalities around him, especially in terms of education, Cameron passionately completes all his endurance challenges to raise funds for an educational charity he founded in 2011. The Ubunye Challenge focuses on Early Childhood Development in rural South Africa, Zimbabwe and the Caribbean.

For the entire 56+ hours of the Barbados to Saint Lucia swim, Cameron did not once touch a boat or another person. He battled through severe sleep deprivation; unimaginable swelling of, and resulting pain from, his tongue, lips and mouth, commonly referred to as ‘salt’ mouth; acute overheating in the unforgiving Caribbean sun and the fatigue of swimming longer than anyone else in history.

Cameron expressed, “The toughest part of the swim for me was the second day leading up to the middle part of the swim. There was absolutely no wind; the air temperature must have been in the mid 30’s and water temp around 30 degrees. I was feeling dizzy and weak and, if it wasn’t for the encouragement of my amazing support crew, I think I might not have made it further. Once I had St Lucia in my sights, after swimming through the 2nd night, I knew I could make it and pushed myself further than I could ever have imagined.”

Cameron had to fight a strong adverse south-moving current for the last mile of his swim. After expending the last of his depleted energy reserves, he touched rocks attached to the shore, signifying the successful conclusion of the swim. Cameron swam to a rubber dingy, was lifted on board by 3 support crew and then taken to his main support boat, ‘Imagine’. Cameron, unable to walk and talk, and only semi-conscious, was treated inside the cabin until the boat docked in Vieux Fort. There the Prime Minister of Saint Lucia, Allen Chastanet, accompanying Cameron’s Mother, boarded the boat to see Cameron.

Cameron was eventually taken by speed boat to the northern capital town of Castries where he was admitted to the Tapion Hospital. He was treated for severe muscle breakdown and toxicity of his blood, swelling of the mouth and sunburn. He has since been discharged to the care of his mother and support crew.