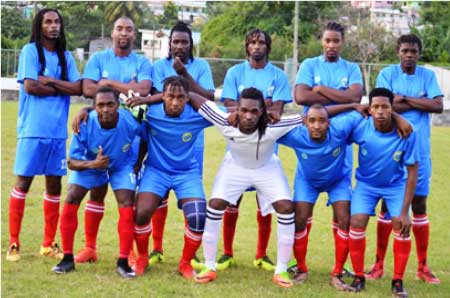 Immediately following the opening encounter, Game No. 2 will commence at 5.00 p.m. between Roseau Valley and Marchand; Game No. 3 – Gros Islet plays Mabouya Valley at 6.00 p.m., and Game No. 4 – Central Castries versus Desruisseaux at 7.00 p.m. to bring the curtains down on day 1.

The showpiece will continue tomorrow (Sunday 8th) with the semifinal and final showdown from 4.00 p.m.

Following Thursday’s draw, the teams were placed in two groups of four where matches will be played on a knockout basis and will be 1 hour duration with two 30 minutes halves.

It must be noted; the top four teams from Group 1 and 2 from the SLFA Island Cup are the only teams competing.

SLFA General Secretary, Victor Reid in addressing the Media at the Big 8 launched said, “It is a pleasure to announce a total marriage of the Saint Lucia Football Association Inc. and Blackheart Productions in the implementation and presentation of the 2019 championship. In the past there was some friction with regards to how the tournament was held/organised. It was a private company running a football competition and after years of dialogue and compromise we have reached an agreement that the tournament will come under the auspices of the SLFA”.

According to Reid, the SLFA has achieved the final part of the puzzle and declared the annual Island Cup be an integral part of the Blackheart championship in 2019 and beyond.

Reid said, “A number of things have changed, in the past there were qualifers for teams to make it to the Big 8, and qualifiers to select 16 teams to compete in the Blackheart tournament. What we have agreed upon, the top eight teams in the Island Cup automatically qualify for the Big 8 playoff and all teams participating in the Island cup will be eligible to play in the Blackheart tournament likewise; the CEO of Blackheart, David Christopher has agreed to these terms and this is how the SLFA will proceed with the tournament”.

David Christopher, CEO for Blackheart Production said, “At present, football is one big family, we have been clamouring for this for a long time to work under one umbrella where the sport could be the winner and not individuals. We are at that junction where we have decided to work together with the SLFA”.

He continued, “In terms of the Blackheart championship officially scheduled to kick off on Saturday 14th at the PMG in Vieux Fort, all the teams that took part in the Island Cup with the inclusion of Soufriere they will be the 18th team, the SLFA affiliate family is 19 teams, Choiseul is out for various reasons”.

Christopher stated, “We will not have the qualifiers like previous years; the tournament will kick off with 16 teams with the exclusion of last year’s champion team Vieux Fort South and losing finalist, Laborie. The two teams will start their campaign in the second round of competition; they will join the top eight teams of the first round. The top five teams will play a round robin and then the best four will head into the semifinal round. It’s more football, it’s going to be 10 evenings of entertaining football”.