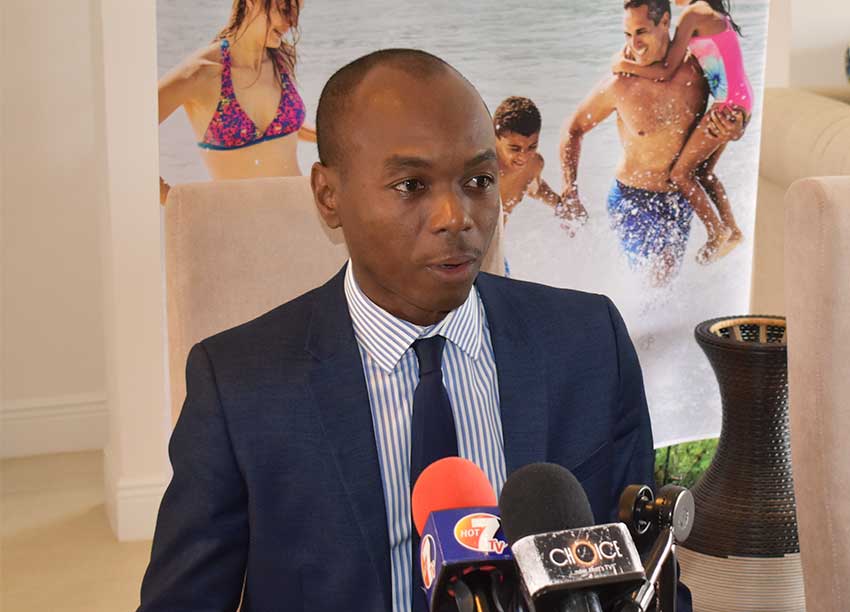 Minister of Tourism, Information and Broadcasting, Dominic Fedee stated this week that Government is on-track with plans to boost the tourism sector. This month the industry surpassed the 6 percent trajectory growth in stay-over arrivals by half a percentage point as of June 2019, resulting in a 6.5 percent growth spike instead of the projected 6 percent. “We are up 6.5 percent which is a pretty amazing year to date,” the Minister remarked. Tourism officials were said to be optimistic over what is considered to be “robust signs” of continuing growth in the tourism industry. Fedee, alongside John Emmanuel, Public Relations Manager of the St Lucia Hotel and Tourism Authority (SLHTA), made the announcement on Thursday August 8th at the Bay Gardens Villas in Rodney Bay.

According to figures presented by the Ministry of Tourism and the St Lucia Hotel and Tourism Authority (SLHTA), Stay-Over Arrivals for the month of June went up to 9 percent from June of last year. One of the contributing factors to this growth was a 17 percent increase in Saint Lucia’s main source market, the United States. There were also increases from other markets such as 9 percent from Europe, 7 percent from the Caribbean and 20 percent from Canada. One of the factors to which Fedee attributed the increase was the unprecedented number of visitors arriving on island for Saint Lucia Carnival. In spite of these increases, there was a 15 percent reduction in visitor arrivals from the UK market.

Only 1 percent growth was reported in the cruise sector. The Minister noted that although fewer cruise ships are coming to Saint Lucia that bigger ones are also coming which keeps the Ministry of Tourism on-track in surpassing the 790,000 cruise passengers that came in 2018. Fedee announced that his Ministry plans to increase revenue from the Cruise Sector. One of the initiatives for doing so, according to Fedee, is to establish through the Tourism Board, a Cruise Conversion Program by the end of November 2019. Discussions were said to be ongoing between the Ministry of Tourism and SLHTA for creating a Revenue Centre at Pointe Seraphine which will provide cruise passengers the opportunity to visit Saint Lucia for longer periods. On that note the Minister stated, “We are very excited about this possibility and we are going to be exploring this.”

Fedee said that his Ministry is about to embark on work with the Choiseul Craft Makers through the OECS Tourism Competitive Project. According to the Minister, this work is intended to add more authenticity to the products provided by the Craft Makers. As for results expected from this endeavour, the Minister stated, “We will see more desirable products coming into the craft sector for tourists coming to our destination.”

As it related to cruise passengers that the Minister said were only spending a third of their time on-shore Fedee added, “We have to work collectively as a country to ensure that we have them to spend a longer time that the boat is at port, on shore.” He further added, “We really need to try and stimulate more interest in our destination for cruise passengers.”

Fedee announced that the Government has made significant headway in establishing what is known as the “Tourism Satellite Account”. The purpose of this, as described by the Minister, is to give a comprehensive overview of the impact that tourism makes on the local economy. He said that it was designed to ascertain the real contribution that tourism was making to the economic development and the sustainable national-economic development of the country. The objective of the Tourism Satellite Account is to assist the Government in making better-informed   policy decisions in regards to tourism.