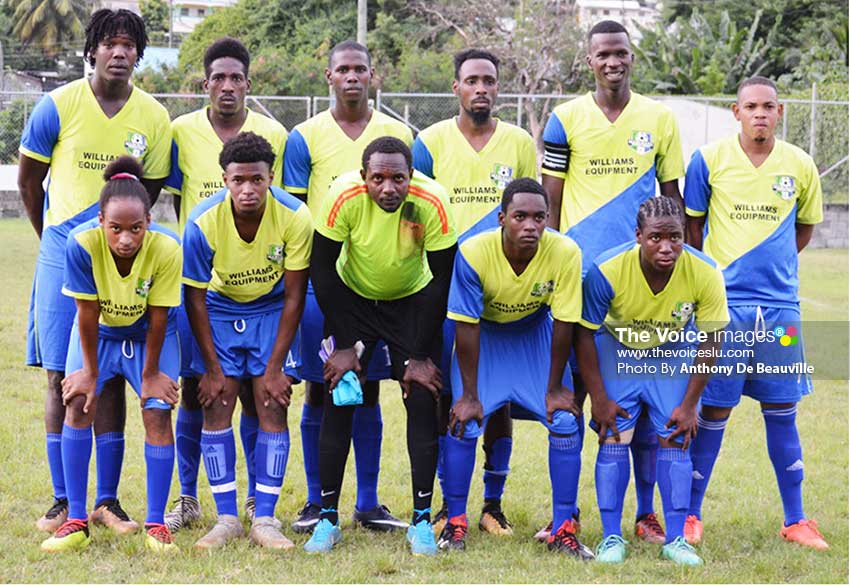 FOOTBALL action continued in the Saint Lucia Football Association (SLFA) Inc. Island Cup at two venues over the weekend. The highlight of the weekend matches was a hat trick scored by Wilson Charlemagne in the 8th, 43rd and 45 + 2 minute for Central Castries against La Clery and Canaries defeating Vieux Fort 1-0 to remain unbeaten in this year’s tournament.

On Saturday 10th, at the Marchand Playing Field, in the first of a double header Roseau Valley edged out Micoud 1 – 0.

The goal was scored by Brenden Modeste in the 12th minute.

In the second game played, Gros islet defeated South Castries 3 – 0 after enjoying a 1 – 0 advantage at the end of the first half.

At Fond Assau Playing Field, Mabouya Valley made light work of Vieux Fort North defeating them 5 – 2. At half time the score was 1 – 1.

In the second game played, Marchand edged out Anse la Raye 3 – 2 having led 2 – 1 at the end of the first half.

Scoring for Marchand were Jarvis Joseph in the 15th and 45th minute and Ferguson St Claire in the 40th minute.

Anse la Raye got their goals from Erickson Reid in the 25th minute and Shervon Eleuthere in the 38th minute.

Nehemiah Wilfred opened the scoring in the 10th minute, with Dario Sagio Osmand getting the other in the 65th minute of play.

Jermie Prospere pulled one back for Dennery in the 88th minute.

In the second game played, La Clery had no answer to Central Castries who hammered them 4 – 0 with all the goals coming in the first half of play.

Wilson Charlemagne scored a hat trick in the 8th, 43rd and 45 + 2 minute, while Jason Similien scored the other in the 20th minute.

At the Marchand Playing Field, Desruisseaux continued their rich vein of form with a 1 – 0 victory over Laborie.

The goal was scored by Bobby Emmanuel in the 21st minute.

Laborie had an opportunity to level the scores but missed a penalty.

Canaries remain unbeaten in the tournament; they got the better of Vieux Fort South 1 – 0 in a hard fought encounter. Their goal was scored by Oneal Toussaint.