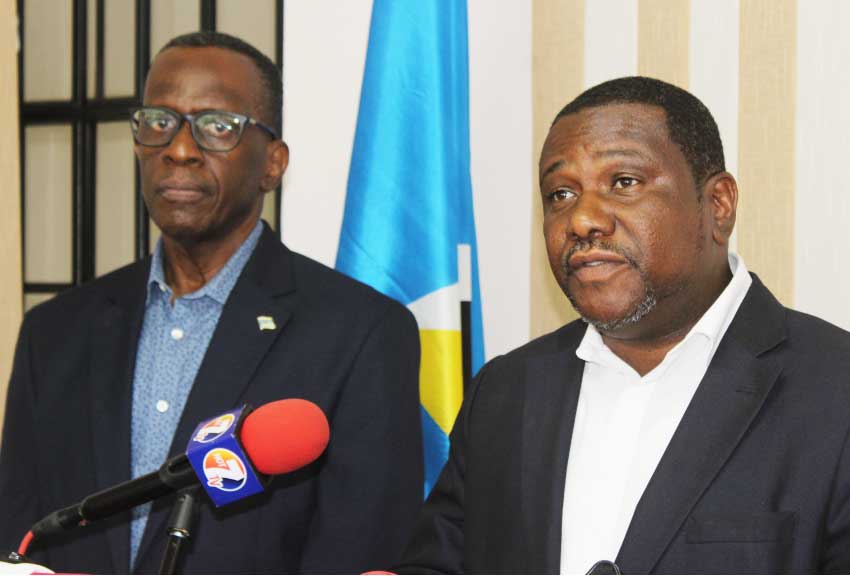 The visit to Saint Lucia by the President of Taiwan and her delegation did not go all that smoothly as the Saint Lucia Labour Party took the opportunity to point to what it called government’s abuse and misuse of Taiwan’s generosity.

The party accused the government of misuse and abuse of official development assistance from Taiwan just about the same time President Dr. Tsai Ing-wen and her delegation touched down at Hewanorra International Airport Wednesday.

The accusations came also at the same time the party wished the President and her delegation a warm welcome to Saint Lucia, urging her to enjoy the authentic beauty and hospitality of Saint Lucia and Saint Lucians.

Leader of the Opposition, Philip J Pierre said he did not find an opportunity to speak to President Dr. Tsai Ing-wen about his party’s views on how the Allen Chastanet regime treats the generosity of Taiwan, however, he found it timely and appropriate to caution the Allen Chastanet-led Administration, on its abuse and misuse of Official Development Assistance (ODA).

“The SLP asserts that the Chastanet regime is abusing the generosity and patience of the Government and People of Taiwan, in order to finance the inappropriate and unproductive activities of Friends, Family and Foreigners (FFF). This is being done to the detriment of the people-to-people diplomacy which was established to foster closer ties between Saint Lucia and Taiwan,” former Foreign Affairs Minister and First Deputy Leader of the Saint Lucia Labour Party Alva Baptiste said.

“Over the years, on the basis of agreed areas of cooperation, the Government and People of Taiwan have assisted Saint Lucia and Saint Lucians in agriculture, ICT and community infrastructure to name a few.  For example, in our efforts at Food Security and Sustainable Agriculture, the Taiwanese invested over EC$20 million dollars in constructing an abattoir (meat processing facility) for Saint Lucia and its livestock farmers. This state-of-the-art abattoir, which is fully completed and equipped, is to be sacrificed to facilitate the construction of a horse racing track for the entertainment of an exclusive few.  Hence, the entire Beausejour agricultural and livestock area of Vieux Fort has been transformed into a playground for the political games of Allen Chastanet and company, at the expense of the ODA from the ROC (Taiwan), and to the detriment of Saint Lucia’s livestock farmers and the local livestock industry,” Baptiste said.

According to him another area of disrespect, disregard and abuse, as it relates to the ODA from Taiwan is in the Saint Jude Hospital Reconstruction Project.

“It is blood-curdling to note that the Allen Chastanet-led administration has treated, as sunk costs (wasted money), the tens of Millions of dollars invested by the ROC (Taiwan) in the rehabilitation of the Saint Jude Hospital, which was nearing completion when this wicked and uncaring administration took over the levers of power on June 6th 2016.  The hospital, which was near completion, could have been finished with the loan funds of US$20 million that were made available by the ROC (Taiwan) and partially drawn down.  To have aborted the completion of the Hospital and leave the buildings unattended for more than three years, for no valid reason, is a clear and categorical abuse of the generosity of the Government and People of the ROC (Taiwan) by the Allen Chastanet-led Administration.  All of this neglect has caused a serious deterioration in the healthcare situation in Saint Lucia, while Allen Chastanet and his apostles can travel the World luxuriously to obtain medical care while the majority of Saint Lucians cannot afford such luxuries,” Alva asserted.

He said the question Saint Lucians need an acceptable response to is: “why would any Saint Lucian government resort to those major indiscretions against a friend of our people and country – a partner in our development, the ROC (Taiwan)?”  In addition, “what has the ROC (Taiwan) done to Allen Chastanet to be treated with such contempt and disrespect?” Baptiste noted.

He added, “At this juncture, it is reasonable to conclude that any leader with a conscience would have apologized to the Government and People of Taiwan for the abuse of their generosity and patience.  But no! This callous, heartless and ungrateful administration has taken its abuse of the ROC (Taiwan), to a new level, when it imposed upon it a loan of US$100 million to fund the Hewanorra International Airport (HIA), which is yet to be fully conceptualized by the Allen Chastanet Administration.  This loan from the ROC (Taiwan) was highly unnecessary, given that a fully conceptualized plan, design and costings were already in place for the redevelopment of Hewanorra International Airport via a Public Private Partnership (PPP) arrangement with the World Bank.  The madness of this Administration has caused it, not to have compassion for the ROC (Taiwan), and to show no appreciation for the sacrifices being made by the hard working people of Taiwan in assisting Saint Lucia’s development; when after all of those indiscretions and abuse of the ROC (Taiwan), it is asking for another sum of money to build a new structure on the Saint Jude site, without any sensible rationale for doing so.”

“The Opposition Saint Lucia Labour Party (SLP) makes it unmistakably clear that it is vehemently opposed to these useless and extravagant borrowings by this Allen Chastanet Administration, and that the Government of the ROC (Taiwan) should exercise an abundance of caution in its response to the financial adventurism of this current Saint Lucian administration, because when we re-enter office, we shall revisit those reckless arrangements, for appropriate remedial action to be taken,” Baptiste noted in a statement to the media Wednesday.

“It is also important for us to emphasize, with much concern, that many foreign governments contributed willingly, but in a very difficult environment for sourcing ODA, towards the reconstruction of the Saint Jude Hospital Reconstruction Project, including the ROC (Taiwan), which provided Saint Lucia with EC $22.5 million in grant funding and US$20 million in loan funding.  This was done for the benefit of the Saint Lucian people and at the sacrifice of the Taiwanese people, but the actions of the Allen Chastanet-led administration are jeopardizing our chances of mobilizing the international community for future support to assist our development,” Baptiste said.

He recorded that given that Saint Lucia is a small, vulnerable and open economy, foreign development assistance can provide the country with additional resources – within the fiscal framework – to enhance its development prospects, and promote economic growth and poverty reduction..

“So when Saint Lucia has a government such as this Allen Chastanet-led United Workers Party, that simply destroys millions of dollars in assistance from sympathetic countries that are trying to assist us in charting the true and real development of our country; we are destroying our country’s reputation, and it does not create an improved framework for Saint Lucia to attract foreign assistance,” Baptiste said.