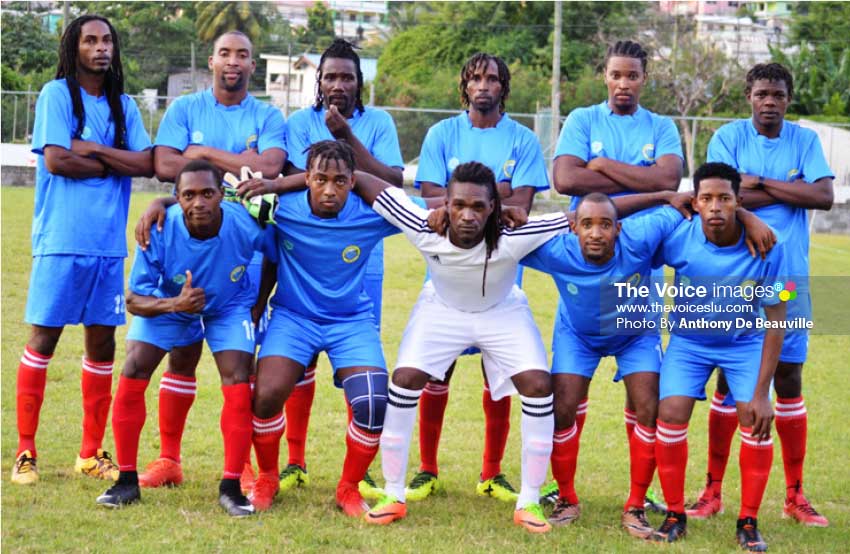 A tropical wave which was located over the Lesser Antilles produced periods of cloudiness, scattered showers and rain as well as isolated thunderstorms over Saint Lucia last Sunday forcing the Saint Lucia Football Association (SLFA) Inc. to postpone all games scheduled that day.

The matches postponed were: Gros Islet versus Vieux Fort South; Central Castries against Marchand at the Marchand Playing Field; and Mon Repos versus Laborie at the La Ressource Playing Field. There is no word yet as to when these matches will be played.

Tomorrow as per the itinerary, at the Anse la Raye Playing Field from 6.00 p.m., Mon Repos versus Roseau; while Anse la Raye plays Mabouya Valley at 8.00 p.m.

Meanwhile, last Saturday at the Marchand Playing Field in the first of a double header Canaries continued their unblemished record with a hard fought but decisive 2 – 1 victory over Micoud.

Canaries was awarded a penalty in the 12th minute of play which was duly converted by Stephen Longville, a right foot shot which eluded the Micoud goalkeeper Noah Didier to his left.

Despite 1 – 0 down, Micoud continued to mount the pressure and in so doing, got the equaliser off a corner which was scored by Lenard Casimir in the 37th minute.

No further goals were scored as the half ended 1 – 1.

On the resumption Canaries continued taking the fight to their opponents and was rewarded for their efforts with Stephen Longville scoring his second goal in the match in the 53rd minute.

Henceforth it was a ding dong battle between both teams as Micoud sought the equaliser, but in the end it was a dogged Canaries team which held on to their 2 – 1 advantage and victory.

In the second game played on the evening Desruisseaux finally got on the points table as they defeated South Castries 2 – 1.

Their goals were scored by Dwight Druehorme in the 5th minute and Janah Crafton in the 2nd minute of added on time.

South Castries goal was scored by Yannick Henry in the 69th minute.

At the La Ressource Playing Field, Mabouya Valley scraped past Babonneau 1 – 0 with a goal by Vernon Abbott.

In the earlier scheduled game that was slated for 6.00 p.m. and despite a release from the SLFA Inc on Thursday 25th as to the change of venue for the weekend matches in the village of Anse la Raye and the use of the Anse la Raye Playing Field for the carnival celebration, Anse La Raye failed to show up for their encounter against Vieux Fort North at the Mabouya Playing Field.