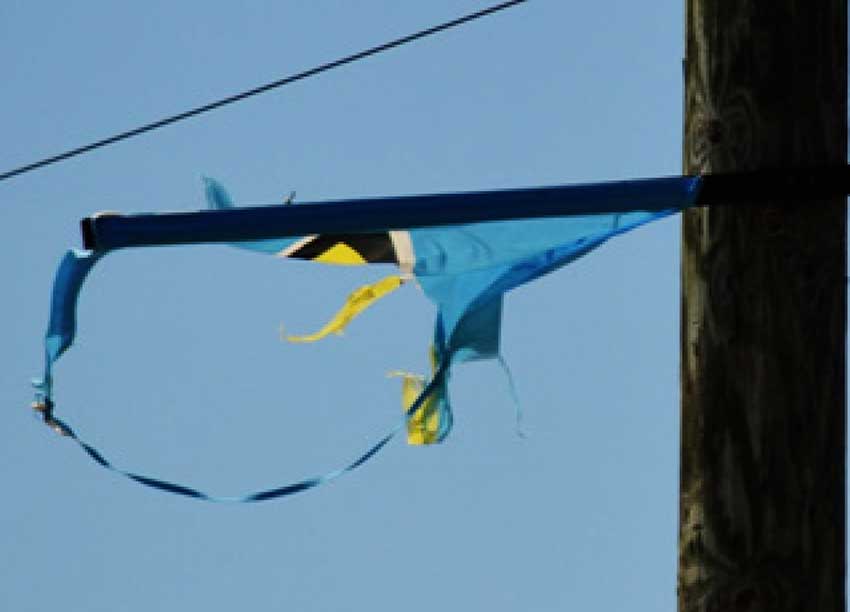 With one week before Saint Lucia observe Emancipation Day (Thursday 1st August 2019) along with many former European colonies in the Caribbean and areas of the United States commemorating the emancipation of enslaved people of African descent and recent celebration of 40 years anniversary of Independence from Great Britain, most Saint Lucians stood proud when the national flag was hoisted to usher in the event.

Since then we seemed to have lost our dignity and hope as a nation? Is this a national blunder or just the norm nowadays that the Saint Lucia flag must remain on an electricity pole to be battered and torn by the weather?

It’s there for all to see, starting from the Beausejour Promenade heading east to the Daren Sammy Cricket Ground (DSCG) on every pole leading to that facility the Saint Lucia flag tells the true story of how much we have lost our respect and maybe, to a certain extent, our way.

One may say it is because of the ferocity of the winds coming from the Atlantic side that the flags have become battered and torn but by the look of things they are not Saint Lucian flags anymore. They look like old kitchen rags.

I assume permission would have been granted by someone in authority for an individual/ agency or organization to put the flags up for whatever celebration they were having at the time, but the organizers for the events never seem to care when the flags turn into an eye sore to take them down.

This is not the first; but the worse I have seen in recent times.

Such acts whether they are intentional terms as “Flag Desecration” and as such flag laws and protocol have been implemented in a number of countries and Saint Lucia is no exception.

Interestingly there is absolutely nothing in Saint Lucia laws indicating that the person or organization putting up the flag can be charge when the flag is left on a pole or building all battered and torn.

One should not burn, hang our flag upside down, soil, tear or use our flag for commercial purposes.

There were two occasions on the waterfront, when the national flag was hoisted upside down (1) outside the GreahamLouisy Building and (2) on a pole close to the seaside which caught the attention of many Saint Lucians going back and forth.

If you think the battered, torn and upside down flag is bad, watch when the singing of the National Anthem is taking place.

We should stand at attention, holding our heads high and should sing along.

As a nation, we should have more civic sense and should learn more to protect national honour. The young ones should be taught well about this and adults should be more responsible, guess what, the children, they are watching closely and will do the very same.