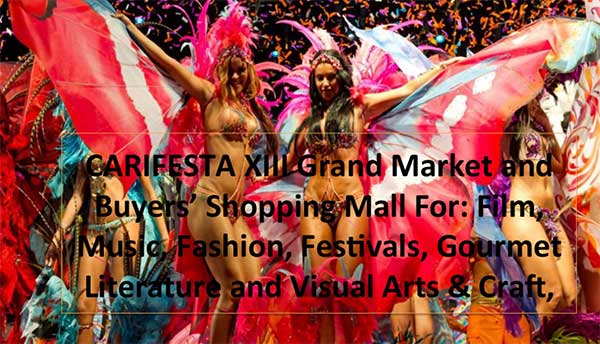 Saint Lucia will be taking part in The Caribbean Festival of Arts (CARIFESTA) XIV to be held in Trinidad & Tobago from August 16th – 25th 2019.

Celeste Burton, Deputy Executive Director of Cultural Development Foundation (CDF), at a press conference yesterday said she was proud to express the organisations’ pleasure, excitement and satisfaction regarding the preparations which have been made for Saint Lucia’s representation at the celebrations.

Said Burton, “We have refocused our intention and our priority to the development of artists and groups involved in culture and the arts in Saint Lucia. We have refocused because we recognise that if we have to compete on the international stage that our artists have to be their best.” In finding the best, Burton stated that every artist underwent a rigorous audition process, followed by training and development exercises. She proclaimed that Saint Lucians will be proud to see the representations of the nation’s artists at CARIFESTA.

One of Saint Lucia’s theatrical productions which will be performed at CARIFESTA 2019 is ‘A Little Folk Tale’ written by Monique Auguste. A well-received excerpt of this production was presented to the audience at the press conference. Folk songs by the Late Dame Sesenne Descartes will also be performed at the Festival. There will also be literary performances by Kendal Hippolyte, Robert Louis, Vladimir Lucien and Ethan Fletcher at the Festival.

Drenia Frederick, Director of Events and Production at CDF and Artistic Director of CARIFESTA St. Lucia, announced that the CDF was looking to establish a National Dance Theatre Company. She said that plans for this company had been in the pipeline for some time now. Through the use of the dance theatre, Frederick stated that young persons can be trained to represent Saint Lucia in the creative arts.

In stating the way forward, Frederick remarked, “We are looking to going on tour with the production at other festivals around the region and the world; the staging of one major theatrical production each year during and after the National Arts Festival.” She also announced that training will be facilitated in the visual and performing arts. In fact, ‘A Little Folk Tale’ will be performed at the National Cultural Centre on Sunday August 11th at a fee of $25 for adults and $10 for children. ‘Silent Scars’, a play by Hayden Forde, will also be performed at CARIFESTA XIV.

The objective of CARIFESTA is to build stronger national, regional and creative industries by bringing Caribbean artists and cultural practitioners together through drama, song, music, and dance and through all other art forms. Eleven Caribbean Member States are reported to be taking part in this year’s CARIFESTA. Performances at CARIFESTA will take the form of theatre, music, literary arts, performance poetry, visual arts exhibitions, craft and fashion and traditional performances.