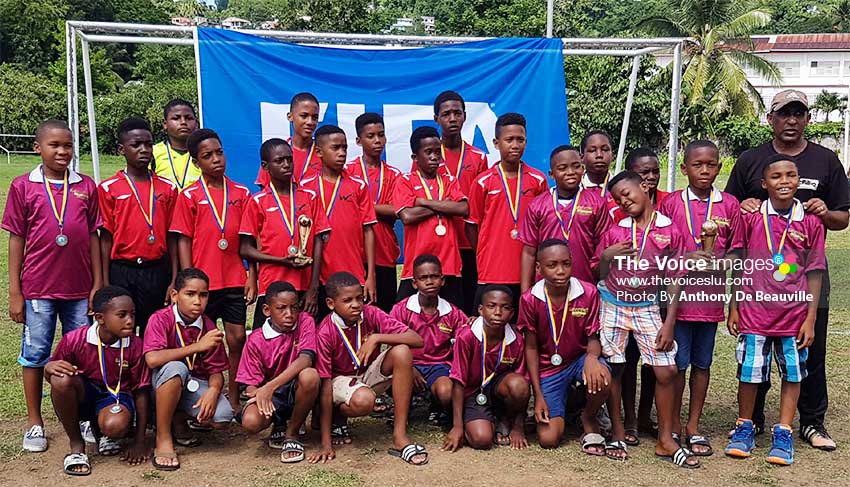 After capturing the National Under-11 championship trophy one week ago, Northern United All Stars’ Under-13s came from a 1 – 0 deficit to defeat a formidable Flow Lancers FC (FLFC) team 2-1 in the Saint Lucia Football Association Inc. Under-13 Football Tournament, to be crowned champions in the final played at the La Clery Playing Field this past weekend.

Flow Lancers FC nosed ahead in the 34th minute with a goal scored by Venroy Alfred, and despite three solid attempts by Northern United All Stars to equalize before the halftime whistle, FLFC was still able to hold on to their 1 – 0 advantage.

On the resumption, it was a different Northern United All Stars team on the pitch as they came out firing at their opponent. Their perseverance and determination finally paid off when in the 50th minute Lyndon Alcindor scored with a spectacular right foot shot, which left the entire back line, including the Flow Lancers FC custodian and supporters, stunned.

It was game on from here and with the scores now level at 1 -1, and with support and loud shouts coming from both camps, the young boys turned up the heat a few notches. The deadlock was broken when Northern United All Stars nosed ahead in the 70th minute with a goal by Giovanni Esper, one where the referee overruled the linesman who had his flag up for an offside position.

With minutes left, FLFC gave it their all, but at the end of regulation time they were unable to equalize. Final score 2 – 1 in favour of Northern United All Stars.

It was a lopsided affair in the Third Place Play Off when Black Panthers trounced Uptown 14 – 1.

For Uptown, the lone goal scored by No.14 Ryan Simeon in the 36th minute came from the penalty spot.

Francis Mc Donald, Technical Director for Northern United and Coach of the Grassroots Programme was elated about the team’s victory.

“This is work in progress,” he said. “We have worked so hard together for the last two years; we have done a lot behind the scenes and off the field to get those boys to where they are at now. We have won the Northern Zone Qualifiers and the Saint Lucia Football Association Under-11s and Under-13s tournaments; that is a very good thing to celebrate and the boys are celebrating right now.”

Read the full interview below:

What are your thoughts on the opposition (FLOW Lancers FC)?

Mc Donald: We were evenly matched. I am very happy with Lancers FC, they are very good. They have good players; the goalkeeper is very good, strong and physical. On the pitch both teams are very tactical. It’s a game where you saw a lot of tactical football. Lancers have always given us that hype especially in a final, we expected that, the final was a very good match and was well contested.

One nil down at the halftime whistle and going into the second half, with time running on the clock.  What was going through your mind then?

Mc Donald: We had a 1 – 0 deficit at halftime; my players were down, disgruntled and were upset about it. They had their chances in the first half but they did not make use of the opportunities. I always tell them, if you put away your chances that decision will come back to bite you. It’s a good thing it happened in the first half and not the second, so we were able to come back in the second half and do a little better. The tempo and the energy level had to increase, you have to be thirsty for the goal, when you get one in the second half you can now go for the winner.

What’s next for the young team?

Mc Donald: In the coming days we will be travelling to Dominica where Northern United All Stars will be playing Dominica’s National U15s, and on return, the development programme continues, as we go along into the season and year end.

Gros Islet seems to be over the top when it comes to youth football, what has led to their success?

Mc Donald: The community has always been a very tight one, every boy and girl knows each other, from house to house, event to event, they play, eat, climb trees, and swim together, that’s what has Gros Islet going, and every one you see here knows each other very well. It continues from the first generation, Troy Greenidge and Eden Charles, and that’s what Northern United is doing, harnessing Gros Islet football and continuing the legacy as we go on.