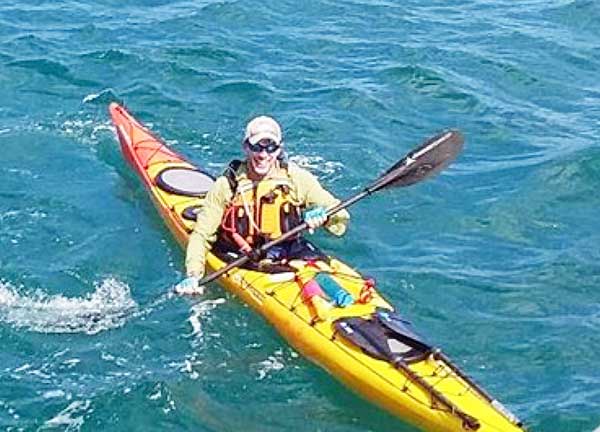 This past weekend (Sunday 7th July 2019) at approximately 5.31 a.m. Weston Moses organized his kayak on the beach of Smuggler’s Cove, next to Cap Maison Resort in Saint Lucia to depart on a trek to Martinique.  The feat is a 21 mile/33 kilometer paddle from the beach in Saint Lucia to the Grande Anse area of Martinique.

Moses, originally from the USA now residing in Dominica, has been an avid water sports fan for decades.  Residing in the Caribbean for two decades, he has trained others around the region in kayaking, offering tours as well as guidance in Jamaica and Saint Lucia prior to moving to Soufriere, Dominica.  He was inspired through the Saint Lucia Channel Swim event organized annually for swimmers to attempt crossing the channel.

Weston might be most recognized for pictures on the water with Molly Nance, the first documented female to swim from Saint Lucia to Martinique in May 2018.  As her support kayak, Moses tried to assist Nance with feedings and direction but found it difficult at a swimmer’s pace in the average 15 mph winds of the channel.  This inspired Moses to train towards making the crossing via kayak.

Arranged as part of the Saint Lucia Channel Swim event, safety and support was provided to Moses while he paddled from one island to the next.  Leaving with the swimmers at 5:31 a.m.  Moses quickly set off and followed a tracked course via GPS.  He arrived on the shores of Martinique close to AnseMeunier beach at approximately 12:30 p.m. Moses indicated although he estimated 5-6 hours to paddle across, he was pleased with his time and performance.  He further went on to say at times the directional change of the current made it more difficult than he imagined.

Next on the agenda, Wes Moses said he will be training for a possible relay swimming attempt across the same channel.  He is currently planning an open water event in Scott’s Head Bay, Dominica to continue to open the avenues for various water sports in the region.