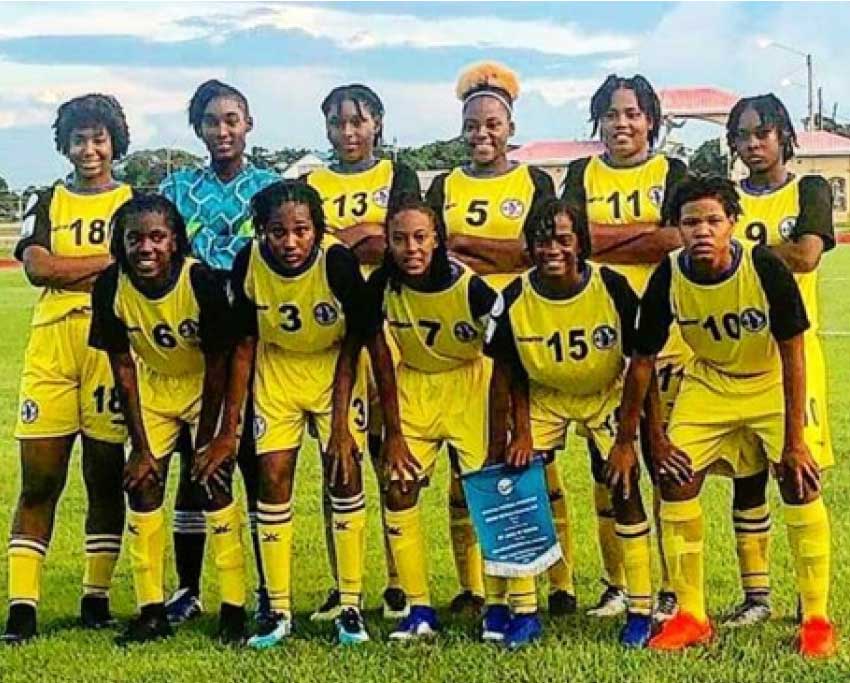 Last evening Saint Lucia took on Antigua and Barbuda in Group A as matches continue in the CONCACAF Under 20 women’s qualifier currently ongoing in Guyana. Saint Lucia’s final match is scheduled for Friday 20th July when they play host Guyana.

The top two teams from the group advance to the round of sixteen.

On Monday 15th, Saint Lucia Under 20 Women’s team took one step closer to qualifying out of Group A as they continued their winning streak when they came up against Bermuda.

St. Louis fired her team into the lead with two early goals in the 10th and 13th minute as the half ended 2 – 0.

These early goals further boosted the team’s confidence going into the second half and though further opportunities were created they were unable to capitalize on them.

However, as the half progressed some of the key players suffered injuries and as a result the team went into defensive mode. It was at this stage that Bermuda was able to pull one back in the 87th minute, which was too little too late as Saint Lucia ran away winners 2 – 1.

The resultant win gave Saint Lucia a maximum of six points, the same as host Guyana who defeated both Bermuda and Antigua and Barbuda by the similar margin of 2 – 0.

On Saturday 13th, Saint Lucia opened their campaign with a hard fought 4 – 3 victory against Suriname in Guyana.

Despite the fair        exchanges between both teams no further goals were scored as the half ended 2 – 1 in favour of Saint Lucia.

On the resumption it was the Tanika Bernard’s show as she completed her hat trick in the 57th and 64th the minute.

Riley completed her brace in the 76th minute for Suriname while Cady chin see Chong scored the third in the seventh minute of added on time.

Meanwhile, Group B is headed by Barbados and Saint Kitts and Nevis each with six points. Barbados have enjoyed 2 – 0 victories against Saint Vincent and the Grenadines and Anguilla, while Saint Kitts have defeated Anguilla 3 – 0 and Grenada 3 – 1.