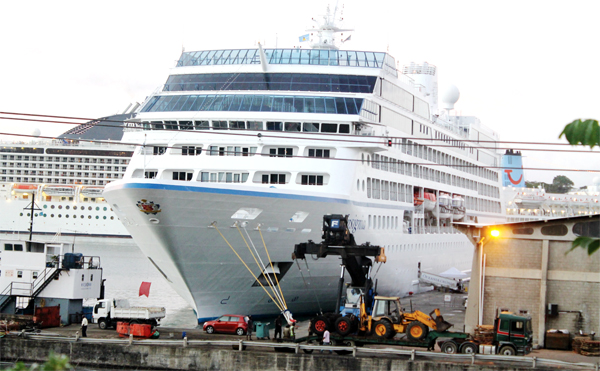 Can tourism dependent Caribbean governments learn something from oil producing countries? When relatively small and poor oil producing governments sought to get a fair price for oil – their main source of national revenue – they banded together to negotiate more effectively with the multi-national oil companies and the larger developed nations, which were the major consumers of their oil. In 1960 five of these countries came together to found OPEC – the Organization of Petroleum Exporting Countries – and were later joined by nine additional member states. As a result of their joint stronger bargaining power, oil prices have risen relatively steadily from US$1.63 per barrel in 1960 to an average of around US$77 during the last ten years.

The weak negotiating position of individual Caribbean governments versus the massive cruise line corporations, relative to port taxes, poses similarities to OPEC’s situation sixty years ago and the same potential “rebalancing” strategy should now be pursued in the Caribbean. If governments across the whole region, including Central America, come together and form OTEC – the Organization of Tourism Economy Countries – they can negotiate as a cartel from a position of greater strength with the cruise lines. Currently, when individual countries try to increase port taxes, they are threatened with being dropped from cruise itineraries and can be picked off one by one by the powerful cruise lines.

From a better bargaining position, state or national governments with single destination cruise itineraries – Alaska, Bermuda and Hawaii – have already negotiated higher cruise port revenues than those in the average Caribbean country. Cruise ships stay two nights in Bermuda and pay at least US$50 per passenger. For mainland United States and Canada cruise itineraries, an average of 33 percent of the cruise ticket price goes to port taxes, compared to an average 14 percent for a Caribbean itinerary. By negotiating together, governments in the Greater Caribbean region can achieve similar results to these destinations with higher port taxes.

A recent statement from the Government of Antigua & Barbuda summarized the history and current situation of regional cruise taxes, as follows. In 1993 Caricom countries initially agreed to impose a minimum US$10 port head tax for cruise passengers but this was never implemented because of internal disagreements. A range of today’s head taxes in the Caribbean is as follows: US$18 – The Bahamas and The British Virgin Islands, US$15 – Jamaica, US$13.25 – Puerto Rico, US$7 – Belize, US$6 – St Kitts & Nevis, US$5 – St Lucia, US$4.50 – Grenada, US$1.50 – Dominican Republic.

Imagine the economic benefit, if these cruise tax rates could be increased and standardized across the region at the higher levels listed. One directly relevant and current challenge could be addressed – the current sky-high airport and air ticket taxes in the region could be reduced to help increase the volume of stay-over visitors in the Caribbean.

Stay-over travelers, whether intra-regional or from outside the Caribbean, spend very much more than cruise ship passengers and generate considerably more local employment than today’s cruise ship business model, which is now highly exploitive of Caribbean countries. An increase in stay-over visitors drives the development of more hotels and marinas, as well as many other forms of real estate and tourism infrastructure investment. Reduced air ticket prices keep intra-regional airlines, like LIAT, flying and increase the number of airline seats in to Caribbean destinations from the rest of the world.

The cruise industry business model has changed radically and aggressively in the last fifteen years and should no longer be viewed as an ideal “partner” for the countries of the Caribbean. There is a growing sense in the islands with the highest cruise ship volumes, like St Thomas and Saint Maarten, that today’s port taxes are not adequate compensation for the overcrowding of down town areas, the pollution from the burning of heavy fuel oil and the minimal spend ashore of today’s cruise ship passengers. The mega ships now have multiple shops, casinos, restaurants and bars offering all-inclusive packages that totally distract passengers from spending ashore. In the last twenty years ships’ commissions on shore excursions have risen from 10 percent to 50 percent, discouraging passengers from going ashore at all and squeezing any possible profit margin for local tour operators. Today, over 80 percent of a cruise ship passenger’s discretionary spend is on board.

Most cruise ships enjoy a double high season – Caribbean for less than six months and the balance of the year in Alaska or the Mediterranean – operating virtually free of corporation taxes and with very low wage bills. The largest ships cost less than US$300,000 per cabin to build, while new hotel rooms in the Caribbean cost double that figure per room to develop and have only one high season. The cruise ship’s highly competitive business model and the further recent growth of cruise tourism in the region might be viewed as a direct disincentive for resort investment and re-investment in the Caribbean.

The total number of cruise ship passengers was over 27 million world-wide in 2018, up nearly 10 percent from two years earlier. In the next ten years, 106 new ships are expected to enter service and, currently, over 50 percent of the world’s cruise fleet is based in the Caribbean for the Winter. The hugely profitable cruise industry can afford to absorb higher port taxes in the Caribbean and will do so, once faced with a stronger negotiating entity.

Do not believe any cruise line threats that they can pull out of the region all together. The Caribbean is the only archipelago with natural beauty and sophisticated tourism infrastructure, located directly between the established feeder cruise markets of North America and Europe and the growth feeder market of South America.

Is it not now abundantly clear that, at the very least, there is an absolute logic to rebalance the tax burden between the Caribbean’s stay-over visitor and the cruise ship passenger?

Editor’s note: The writer is the Managing Director of MacLellan & Associates, the largest hospitality consultancy based in the Caribbean. Robert MacLellan is a veteran of the hotel and resort industry. In his early career, he was an onboard hotel officer with a major cruise line and, later, a Vice President of an explorer cruise line.