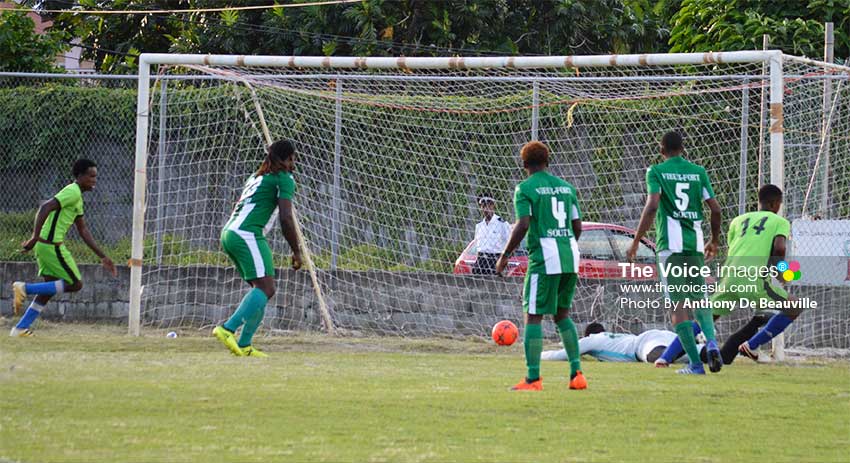 Nineteen goals were scored from eight matches, including a hat trick and three drawn games, as the Saint Lucia Football Association Inc. Island Cup sponsored by the National Lotteries Authority kicked off in contrasting styles at the Marchand Playing Field and the La Ressource Playing Field this past weekend.

At Marchand last Saturday Vieux Fort South served early notice when they came from behind to defeat a spirited Mon Repos team 4 – 2.

No further goals were scored as the half ended 1 – 1.

On the resumption, both teams sought the go ahead goal, but poor finishing negated this. However, it would be Mon Repos who would seize the advantage with J. Joseph finding the back of the nets in the 78th minute.

This served as a wake call for the Southerners, who continued to exploit their opponents left flank and it came as no surprise as Jevic Mc Farlane scored a brace in quick succession in the 80th and 83rd minute. These two goals really broke Mon Repos as Antonio Joseph sealed the initiative with a goal in the 85th minute.

When the final whistle sounded it was a relieved yet confident Vieux Fort South team basking in the hard but well-earned 4 – 2 victory.

The second encounter was a very exciting one with Gros Islet prevailing over Laborie 3 – 2.

The half time score was 3 – 1 in favour of Gros Islet.

Scoring for Gros Islet were Tev Lawrence in the 5th and 19th minute, with Laborie’s Francis Joyent conceding an own goal in the 30th minute.

Laborie got their goals from Darell Francis in the 15th minute and Imyran Marshall in the 47th minute.

Interestingly both teams first goal emanated from the penalty spot.

Over at the LPF on the same day Anse La Raye and La Clery played to a tame goalless draw.

In the second game played, Dennery edged out Vieux Fort North 1 – 0 with the goal scored by KenviePolius in the 85th minute.

Babonneau and Marchand played to an exciting 1 – 1 draw, Sunday, with both teams guilty of squandering numerous opportunities.

However, in the 59th minute of play Marchand was awarded a penalty which was taken by Lamar George whose shot was saved by the goal keeper and in the ensuing tussle the ball was deflected for a corner.

Marchand made amends immediately with Valdez Maximin slotting in from the corner kick.

However, with the fortunes shifting back and forth Babonneau secured the equalizer with a Nelson Nelson goal in the 81st minute.

Both teams fought gallantly for the winning goal which never materialized and when the final whistle sounded both teams looked pleased with a share of the points.

In the second game played Canaries enjoyed a comfortable 3 – 0 victory over Roseau with Nick Longville registering a hat trick in the 14th, 38th and 61st minute.

At the La Ressource Playing Field, Central Castries and Mabouya Valley played to a goalless draw.

In an earlier encounter Micoud got the better of Desruisseaux 2 – 0 with their goal scorers being Shane Paul in the 27th minute and Toni Gaspard in the 45th+1 added time.

Matches will continue on tomorrow from 6.00 p.m. at the Marchand Playing Field, Canaries takes on South Castries and Roseau play Vieux Fort South at 8.00 p.m.

Also tomorrow, at the La Resource Playing Field, from 6.00 p.m. Mon Repos versus Gros Islet and La Clery takes on Dennery at 8.00 p.m.