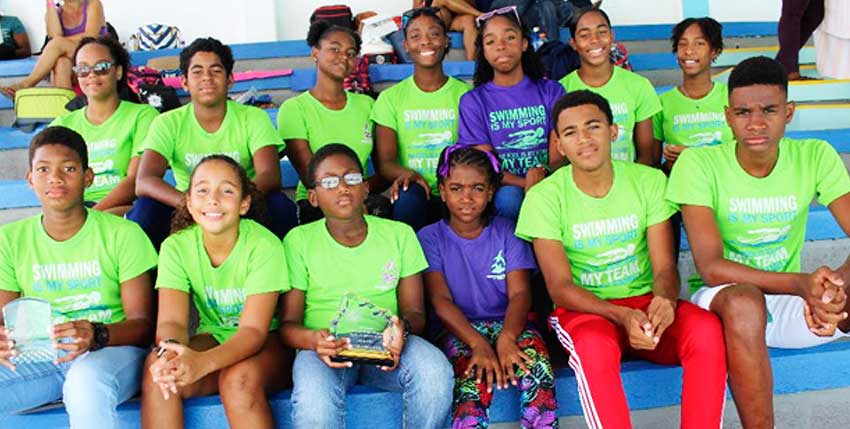 With a small contingent of 13 of its 42 swimmers, Lightning Aquatics (L.A.) Swim Club emerged as the 1st place Organization of Eastern Caribbean Sates (OECS) Champions at the 28th Annual Aquatic Centre International Invitational held in Barbados last weekend.  The team also placed 4th overall out of the 17 participating teams.

The team was accompanied by Coach Peter James who was exceedingly proud of the swimmers. He said, “Over the three days they recorded an overall personal best (PB) time of 67.7 percent (PB refers to the improvement of the swimmers’ times). Several swimmers obtained ‘A’, ‘AA’ and ‘AAA’ times which signify they are on their way to qualifying for more competitive meets such as CARIFTA and CCCAN. I am proud of our swimmers’ performances considering this was the first long course meet for the year for most of them.”

The relays proved to be electrifying with the girls relay team of Naekeisha Louis, Courtney Paul, Naima Hazell and Angelique Gaillard snatching silver medals in both the 13-14 girls 4×50 metre freestyle relay and the 4×100 metre freestyle relay; meanwhile, a team comprising Naekeisha, Naima, Courtney and Simone Walters dug deep for the bronze medal in the 4×100 metre medley relay.

A combined team from Saint Lucia comprising L.A’s Ethan Hazell and Karic Charles; TherronHerelle of Seajays and Antoine Destang of Sharks put on a stunning performance in the 11-12 boys 4×50 metre freestyle relay placing 1st and falling short of breaking the meet record by 1 second.

Lightning Aquatics congratulates all swimmers who took part in this meet especially those from the 3 participating Saint Lucian clubs.