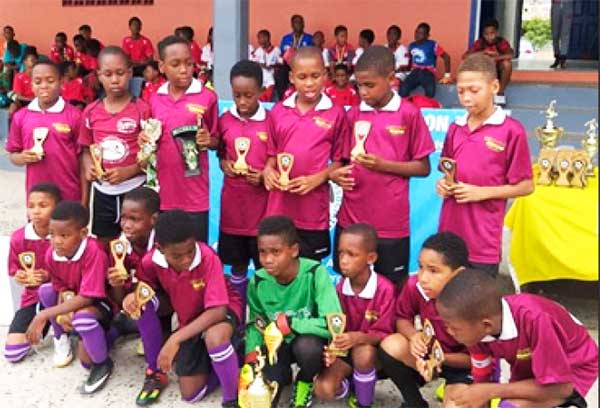 The Saint Lucia Football Association (SLFA) in the coming days will stage a number of local, regional and international matches at various venues including the Daren Sammy Cricket Ground in Gros Islet.

On the heels of last weekend’s Northern Zone finals, the SLFA will play host to the quarterfinals of its Under-11 and Under-13 Football Competition scheduled for Saturday June 8th and Sunday June 9th, 2019.

As the fixtures are being finalized by the SLFA, the following winning teams will represent their respective districts in the Under-11 division.  Northern Zone: Northern FC and Valley Soccer FC; Eastern Zone: El Ninos FC and Lion Heart FC; Western Zone: T Valley FC and Bays FC and Southern Zone; Black Panther FC and Shamballa FC.

The SLFA Inc. will also be staging the Island Cup Championship which is scheduled to commence on Saturday June 29 at selected venues.

Additionally, plans are on stream for the staging of the Under-17 Club Football Championship, which will come to life on Sunday, June 23rd. According to the SLFA, to be eligible to participate in the tournament players must not turn 17 years in the year of the tournament. The Championship will be run on a Zonal basis and respective Zone Organisational Teams are expected to ensure that they set up their planning meetings before Tuesday, June 11th.

Registration of teams will be done through the Office of the SLFA Inc. who will provide the necessary registration forms. A technical meeting has been scheduled for Tuesday, June 11 at the SLFA’s office in La Clery.

Also on the packed schedule for the SLFA Inc. is the Windward Islands Senior Women’s Football Tournament from Wednesday, June 26th to Sunday, July 7th, 2019.

The Tournament, which will be played at the Daren Sammy Cricket Ground in Gros Islet, will be contested over five match days.

Meanwhile, Saint Lucia’s Senior Men’s Football Team will be participating in the CONCACAF Nations League which will be contested in a Group Stage, home and away format.

Saint Lucia has been drawn in Group B which comprises of the Dominica Republic, El Salvador and Montserrat.

In order to properly plan and deliver an exceptional product as it relates to hosting the respective matches, the SLFA Inc. has formulated a broad-base planning committee under the Chairmanship of President, Lyndon Cooper.

The committee held their first meeting on Thursday, May 30th 2019 at the SLFA Inc. conference room, where members were apprised of their roles and responsibilities.

Members reaffirmed their commitment to their respective tasks and pledged their support in ensuring that the hosting of the tournament and matches meet the high expectations.

The next planning committee meeting is scheduled for Tuesday, June 11th 2019 at the SLFA Headquarters in La Clery.