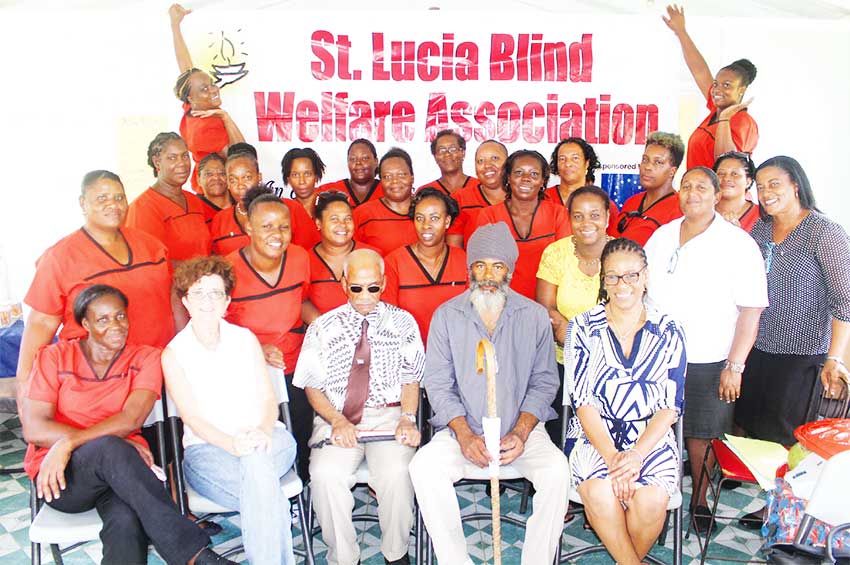 Friday, May 31, 2019 marked the “Regional Day for Blindness Awareness in the English – speaking Caribbean”. The wearing of crazy socks was an activity that was incorporated into this year’s observance of May as Blindness Awareness Month. The month long observance was led by the Saint Lucia Blind Welfare Association (SLBWA).

During the month of May, the SLBWA placed heavy emphasis on the increasing number of persons who become blind or visually impaired due to advanced age, diseases such as diabetes and glaucoma, not forgetting trauma to the eyes through various accidents or acts of violence.

Throughout the month the organization also reminded both the private and public sectors to come onboard to support the organization in remaining sustainable and capable of lending assistance to blind or low-vision persons in key areas such as education, and adjustment to blindness.

During the month of May the popular business chain Massy Stores partnered with the SLBWA by facilitating cash donations from customers from EC $5.00 up to $ 200.00  at its check out points. This enabled the public to conveniently make contributions to the cause of the SLBWA while shopping.

Another highlight of this month was a donation of $ 25,000.00 made to the Saint Lucia Blind Welfare Association by the Office of the Prime Minister. The proceeds were raised at this year’s Prime Minister’s Independence Ball.

According to the Executive Director Anthony Avril and President Glen Simon, the SLBWA is truly grateful for the invaluable support it has received.

Blindness Awareness Month 2019 was held under the theme “mobilizing our communities…building resilience”. Some activities will continue into the month of June.

Meanwhile, the Saint Lucia Blind Welfare Association was represented by its President, Glen Simon and Executive Director Anthony Avril at the World Blind Union (WBU) North American / Caribbean Regional Meeting in Trinidad and Tobago held from Friday, May 31 to June 1, 2019.

The meeting took place at the school for the Blind in Santa Cruz and was hosted by the Trinidad and Tobago Blind Welfare Association. The Saint Lucia Blind Welfare Association has successfully applied to become members of the WBU and this is the first time the organization will be representing its interest outside of the Caribbean Council for the Blind (CCB) as it relates to WBU affairs.