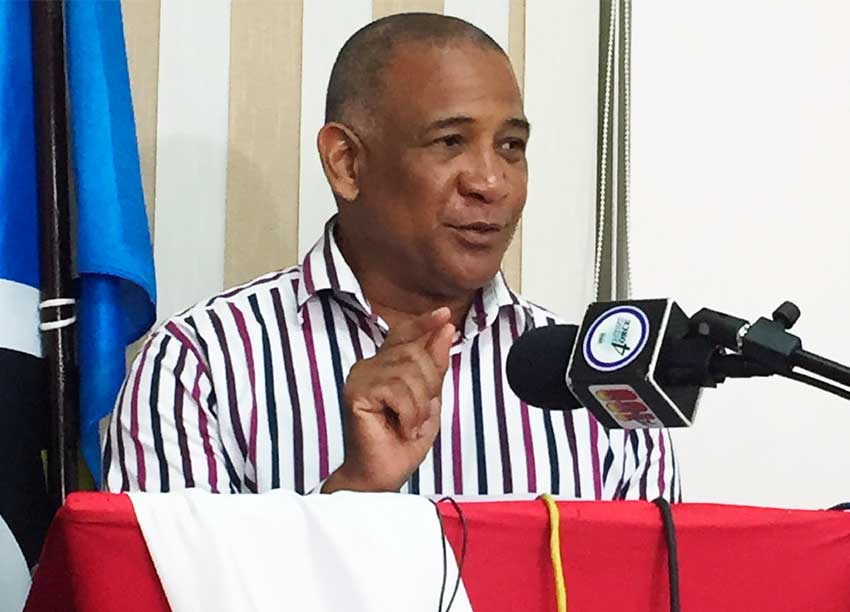 On Thursday May 30th, the Saint Lucia Labour Party held a press conference at the Office of the Leader of the Opposition on High Street. Philip J Pierre, Leader of the Opposition and Ernest Hilaire, Opposition Parliamentarian for Castries South, were both present at the conference. Pierre and Hilaire spoke on the matter of the PAJOAH Letter and what they felt was the Government’s lack of transparency and accountability, among other issues.

The PAJOAH letter is a controversial document which recently landed in the public domain. This document bears the letterhead of the Government of Saint Lucia, a stamp from the Ministry of Economic Development, Transport and Civil Aviation and is purported to have been signed by Guy Joseph, Minister for Economic Development. Guy Joseph has neither denied nor confirmed whether he was in fact the one who signed the letter.

This letter, according to Pierre, served as confirmation that the sum of EC$167.4 million had been awarded without parliamentary approval. The letter in question sought funding for the St Jude Hospital and the Street Lighting project. Pierre stated that the CDB in May 2016 had estimated EC$34.8 million for the Street Lighting project, but the letter requested an additional EC$132.5 million in excess of the approved amount. Pierre wanted to know why the additional amount was quoted in the letter and whether the signature it bore was actually that of Guy Joseph. Pierre further stated, “If the signature was authentic then this was a serious matter and Guy Joseph should be disciplined for gross misbehaviour in public office. If the signature was not authentic then this is an equally serious matter and the Prime Minister must involve all relevant agencies including a recognised handwriting expert to ascertain the forgery of the letter.”

If the signature on the letter happens to be authentic then it warranted disciplinary action against Joseph, according to Pierre, including his dismissal from Public Office which Pierre insisted on some time ago. Joseph, who has been observed to deflect from the issue, did not take this too kindly and has called Pierre a fool for reacting disproportionately to the PAJOAH Letter. Pierre says that Joseph’s response to the PAJOAH scandal “Is an insult to all Saint Lucians who desire a country governed with integrity, transparency and accountability. I am not surprised that Hon. Guy Joseph’s response was empty and simply disrespectful. His reaction was an act of gross arrogance and showed scant regard for the laws and procedures which are in place to avoid corruption and misbehaviour in public office.”

Pierre was exasperated over the trivial manner in which the Government of Saint Lucia was reacting to the PAJOAH Letter. He said the Prime Minister was behaving distastefully for refusing to take the necessary course of action in relation to this issue, and that the Saint Lucia Labour Party will continue to pursue the matter until it is adequately addressed. Pierre stated that the implications of the PAJOAH Letter were too severe to be overlooked. He demanded an answer to the following, “If the commitment in the letter was according to Guy Joseph, ‘not intended to be binding on the Government’, was it intended to mislead or misinform the suitable financial institution that would be able to provide the requisite financing?” Pierre argued that the Government did not possess the standard of professionalism and ethical values that is required for dealing with matters of governance.

Hilaire affirmed that the Prime Minister should present the correct document in order to prove that any other was in fact a forgery, and then request the Office of the DPP to investigate the matter. Hilaire claimed that he is prepared to testify under oath and reveal the identity of the individual who presented him with the document, along with the circumstances under which they were made available to him.