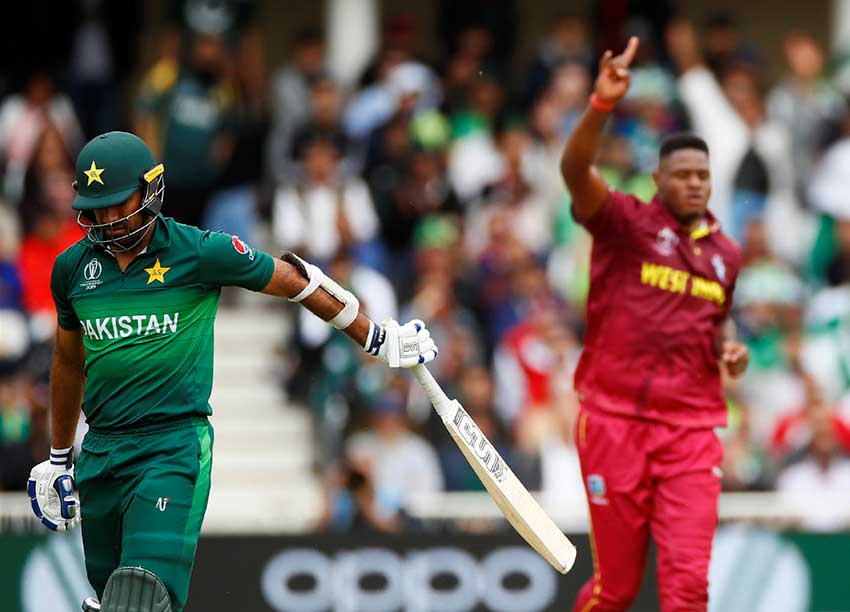 The West Indies pacemen blew away Pakistan’s batting line-up for 105 in the 22nd over. Four bowlers shared the 10 wickets with the wicket-keeper, without having to pitch the ball up. It was so bizarre, but Pakistan batsmen are known for bizarre acts. Shai Hope, with four catches behind the stumps to send back the cream of the opposition line-up, had complemented the bowlers’ efforts.

Chasing such a small total, West Indies batsmen were in no mood to hang around and tuck into Pakistan bowlers, particularly Chris Gayle, who smashed a quick-fire 50 off 34 balls with 5 fours and 3 sixes. It was all over in 13.4 overs with the required score reached for the loss of three wickets, all to Mohammad Amir. Easily one of the shortest ODIs between two leading sides, in fact a full T20 would last longer than what happened at Trent Bridge.

A limited-overs cricket match between Pakistan and West Indies – two very passionate and all-or-nothing teams – continue to carry a unique buzz ever since their meeting in the inaugural World Cup played in the glorious English summer of 1975. A thrilling one-wicket win at Edgbaston by the West Indies is often referred as ‘daylight robbery’ by the Pakistani fans. Those old enough to recall the footage and newspaper coverage the following day, can testify it being a ‘sporting tragedy’ at par with anything experienced before or after.

If Pakistan were looking for moments of inspiration from the past at Trent Bridge, it could pick Majid Khan’s silky stroke play en route to his 108 against England in 1974 and Shoaib Akhtar’s missile-like yorkers that shattered Kiwis in the 1999 World Cup semi-final.

Pakistan in announcing 12 players which did not feature the two teenage pacemen – Shaheen Afridi and Mohammad Husnain – had opted to go with experienced pace attack and with at least three slow bowlers. They have every reason to be wary of the big-hitting capabilities of West Indies batsmen, led by Chris Gayle, who in his 40th year, can still ruin your figures in no time.

Asked to bat first under overcast conditions on a belter of a wicket, with no more than quarter of the seats occupied, Fakhar Zaman opened his account with a pick-up six over square-leg off Jason Holder. Some erratic bowling was on offer from West Indies, and with luck on their side, had sent back both openers by the sixth over and another two to reduce Pakistan to 62 for 4 in 13.1 overs and looking million miles away from a total 300.

West Indies bowlers continued to peg back Pakistan and there was a spell when 5 wickets were claimed for just six runs within 21 balls. The ninth wicket was claimed at 83 and it was only some lusty blows by WahabRiaz that carried the total to 105 all out in just 21.4 overs. Oshane Thomas with 4 for 27 off just 5.4 overs, enjoyed a day of easy pickings as Pakistan innings was over by 12.20.

There were high expectations of fireworks from both sides at Trent Bridge, but Pakistan, so abject in their batting, could not deliver leaving their counterparts to dominate the entire match.