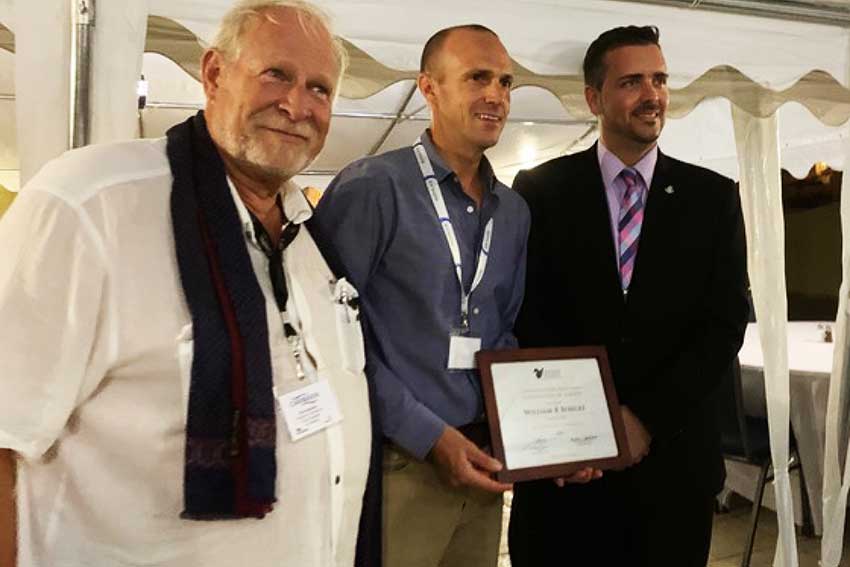 Journalists, pilots, and movers and shakers of the travel industry gathered to brainstorm at the Caribbean Aviation Meetup in St Maarten/St Martin, June 11-13.  They came from around the Caribbean, Cameroon, Ghana, Nigeria, Canada, France, Florida, New York, and London.

Their focus: increasing airlift into and within the Caribbean.  Attendees also explored strategies to overcome obstacles such as high airline taxes and inconvenient, costly transportation between the islands.

The Caribbean Aviation Meetup, aka Caribavia, is a resulted-oriented communication platform for stakeholders in aviation, tourism, and investment industries, according to its website. The conference encourages thinking out of the box, together.

“St Maarten has a unique opportunity to rewrite its aviation policy and play a more leading role in Caribbean aviation, as we rebuild our airport,” said Stuart Johnson, Minister of Tourism, Economic Affairs, Transport and Telecommunication in St Maarten.

Because the Caribbean depends on tourism, increased air traffic into the region, along with more intra-island flights, would not only benefit the Caribbean economy but also provide job opportunities for those who might otherwise move away.

Vincent Vanderpool, Principal Partner of the Bedford Baker Group in Nassau and past Minister of Tourism and Aviation in the Bahamas, kicked off the Meetup. His topic, “Friendly Skies; Liberalizing Airlift in the Caribbean,” emphasised the importance of viewing the Caribbean as one entity with team spirit.

“Now, suppose there was a country known as the United States of the Caribbean?  What would that country look like?” he asked.

He listed talented African Americans who have left the region and taken their skills elsewhere.

“Look at the individual achievements: From the Bahamas, Sidney Poitier who won the first Oscar for acting, Cardinal Warde, a professor of physics at MIT, from Barbados, you have Robert Rashford, an aerospace engineer from Jamaica whose patents were used in the fix of the Hubble Space telescope.  And have a look at all the Caribbean participants in the Olympics!” Vanderpool-Wallace said.

He noted Miss Universe and Miss World contestants and Formula One race car drivers; and mentioned David Ortiz, a baseball player from the Dominican Republic.

“You can go on and on,” Vanderpool-Wallace said.  “There’s no question; extraordinary talent comes from this region.”

He called their exodus “brain drain.”

“The reality is that the Caribbean is among the highest places in the world for emigration of its citizens,” he said.  “Skilled people are leaving.”

“People have a yearning to go somewhere else to express their talent.  But, by making it difficult and expensive to go right next door, you force talented people to leave the region,” he said.

Again and again, Vanderpool-Wallace drove his point home: The Caribbean must have easier and less expensive intra-island transportation and more attractive employment opportunities.

Islanders often have to fly though Miami in order to reach another Caribbean island.  Why should Bahamians have to fly via Florida or sometimes even Toronto to get to a good fare to Barbados?

“We consistently make it difficult for people to move around our region,” he said. “The most powerful factors in trade and travel are proximity and facility!”

He noted that Mexico and Canada are America’s biggest trading partners, not China.  More visitors to Las Vegas and Orlando come from nearby, not afar.

“If the Caribbean is not only the world’s most tourism dependent region but also the most aviation dependent, why aren’t we making it easier for people to use aviation services?” he asked.

He suggested that governments lessen taxes on airline tickets thereby attracting more movement into and within the region and allowing for greater hotel occupancy.  “When we start talking about taxes for infrastructure, collect the taxes after the customer arrives by maximizing hotel occupancy,” Vanderpool-Wallace said.

“Here’s another secret: the shorter the length of stay, the more the average person spends,” he said.

Cdr. Bud Slabbaert of St Maarten founded the Caribbean Aviation Meetup four years ago and has planned them every year since.  He held this year’s conference at the Simpson Bay Resort on June 11 and June 13 and included sessions at the Grand Case airport on the French side, on June 12. All in all, he organized thirty forums with Q & A sessions after each.

Honouring individuals and companies that have made outstanding contributions to business aviation in the Caribbean, Honorable Stuart Johnson presented the prestigious Sapphire Pegasus awards at the opening night gala.

Dominica and the Bahamas have hosted previous Meetups as has St Maarten.

Speakers and participants left this fourth annual Caribavia invigorated and resolved to make a difference.

As Vanderpool-Wallace said, paraphrasing Nelson Mandela, “Everything is impossible until it happens.”