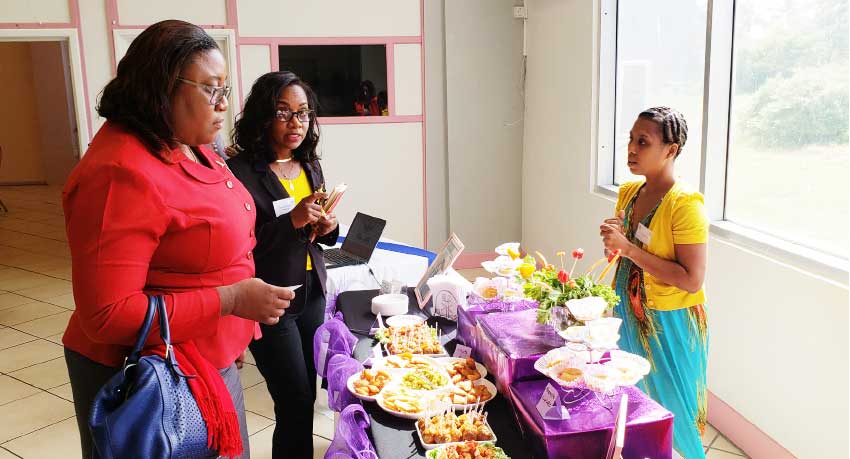 Twenty young entrepreneurs are currently being mentored here in Saint Lucia, by twenty experienced business persons from the local community. The “20 meets 20, Mentorship Programme” was announced here in January of this year, as part of activities to mark Saint Lucia’s 40th Anniversary of Independence. On June 4th 2019, a training exercise was held between the 20 young entrepreneurs selected and their mentors, at the Golden Palm Conference Center in Rodney Bay. This was followed by an exhibition of the work of the participants and a business mixer.

“Government embarked on a very participatory and inclusive calendar of activities to mark the observance of Saint Lucia’s 40th anniversary of Independence,” Ms Joseph started off by saying. “A number of events were planned, including a 20 meets 20 mixer, for 20 veteran business owners and 20 young entrepreneurs. In January, the Independence 40 committee engaged in dialogue with the Small Enterprise Development Unit, SEDU, of the Department of Commerce and the Saint Lucia Chamber of Commerce, to plan and implement this initiative,” she went on to say.

In explaining the criteria, PS Joseph said that start up applicants had to be between the ages of 18 and 35, in operation for not more than five years and registered with the registry of companies or SEDU. Between June and December 2019 when the programme culminates, the mentoring, monitoring and training of the mentees continue. An award ceremony will then be held in December, 2019.

“And here we are today, cementing the foundation for inclusive economic growth and community development. Today we have witnessed some of the amazing innovative ideas on display,” she said.

Chair of the Independence 40 Committee (who is also President of the Senate) Jeanine Giraudy McIntyre remarked that the theme for Independence 40, “All in Our Journey Our Future”, is not just about the inclusion and participation of all citizens. “But also about the inclusion of the social and economic activities of which our citizens are engaged, which of course therefore, includes entrepreneurship and business,” she said.

The idea of the 20 meets 20 mentorship programme she disclosed was proffered by committee member Sonia Sifflet and heartily embraced by the Independence committee.

“We the committee are thrilled by the response of SEDU, the Department of Commerce and the Chamber of Commerce who literally jumped on board, adding innovation, content, resources, funding and ongoing monitoring,” Jeanine Giraudy McIntyre said.

Executive Director of the Saint Lucia Chamber of Commerce, Mr. Brian Louisy stated that the Chamber of Commerce grasped the opportunity to participate in this programme, since it was predicated on the organizations beliefs. He pointed to the success the chamber has had in other youth programs, including Junior Achievers and more recently the Youth Business Trust.

“We extended that service to the 20 meets 20 mentorship programme, and we are proud to say that we have done some work in preparing our mentors and mentees and we do believe that this program is going to be beneficial. We will continue to work as a national institution and to play our part, we will develop our entrepreneurs, preparing the next entrepreneurs of chamber members,” Louisy stated.

Senator Fortuna Belrose, Minister in the Ministry of Ministry of Tourism, Information and Broadcasting, Culture and Creative Industries thanked the Independence 40 Committee for their passion and dedication which she said was what was needed to inspire young persons.

“People who are passionate and believed that we should be doing more, that’s what we had with the committee of the 40th Independence Anniversary, and that’s what our young people want, they want people who are eager and excited,” she said. She went on to thank all the participants and called on Saint Lucians to continue to rally behind the independence theme “All in, Our Journey Our Future”.