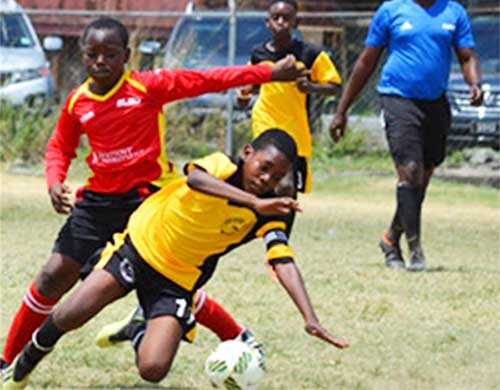 In what was being billed as the battle of the North and the battle of Central Castries lived up to expectations when the semifinals of the Saint Lucia Football Association Inc. Northern Zone Under – 11 competition took place at the SAB Playing Field on Saturday 18th May 2019.

Amidst humid conditions, and with the very appreciative and enthusiastic support of parents, coaches and well-wishers on the sidelines, the young aspiring footballers did not disappoint.

In the Northern derby, despite the creation of some chances Monchy FC could not get past their neighbours Northern FC on the day.

However, in the Central derby Valley Soccer handed Lancers FC their first defeat of the tournament as they booked their way to the finals.

In the first match played Valley Soccer had a convincing 3 – 0 victory over Lancers FC. They got their goals from Omarion Edwin in the 9th minute and a brace from Daniel Zakhour in the 12th and 31st minutes.

The other semifinal was a complete one sided affair as Northern defeated Monchy 7 – 0.

The Third Place Play Off and Finals is now carded for Saturday 25th May 2019 at the Corinth Playing Field.

Lancers FC will come up against Monchy FC from 10.00 a.m., while Northern FC plays Valley Soccer FC for the championship trophy and gold medals at 11.00 am.