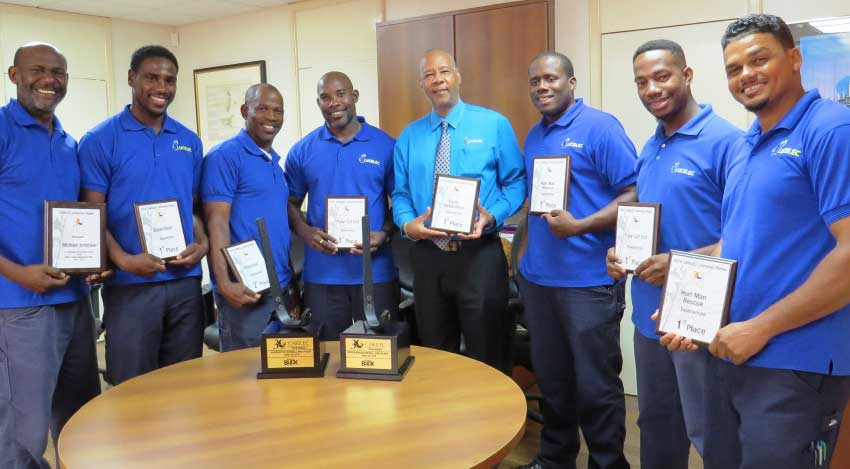 The six member St. Lucia Electricity Services Limited (LUCELEC) Apprentice and Experienced Linesman team headed to St Kitts on a clear mission. The Apprentice team, winners in their division for the past two years wanted to complete the 3-peat. For the Experienced Team, it was a shot at redemption after going down last year to Dominica. But alas, it was not meant to be.

When the dust settled, LUCELEC would have to settle for second place in both divisions. The day of reckoning on Saturday, April 20 belonged to ANGLEC (Anguilla Electricity Company Ltd).

The LUCELEC team competed against 17 other teams; eleven Experienced and 6 Apprentice. The 6-event rodeo was held under the theme, “Caribbean Linesmen Creating Connections; Strengthening Communities”.

A linesman in the Experienced Division has more than five years in the profession; the Apprentice linesman has five years and less.

Representing LUCELEC in the Experienced Squad was Tomy Adolph, Alpheaus Alexander and Voldon Hazell. In addition to the overall second place finish, they claimed first place in three of their six events. For them, success came in the hurtman rescue, fuse cutout installation and HV earth installation.

The Apprentice Team members of Godwin Brice, Sherick Anthony and Nerie Joseph walked away with four event wins in basketball, hurtman rescue, HV Earth Installation and HT Fuse installation. It was a bittersweet end for Team Captain Brice who moves up to the Experienced Division next year.

During the presentation ceremony, CARILEC recognized four LUCELEC Supervisors for “committed and dedicated service on the CARILEC Rodeo Management Team”.  Terry Popo, Lazarus Alphonse and Justin Small received accolades for their work in 2018 to 2019, and Michael Ambrose for 2015 – 2019.