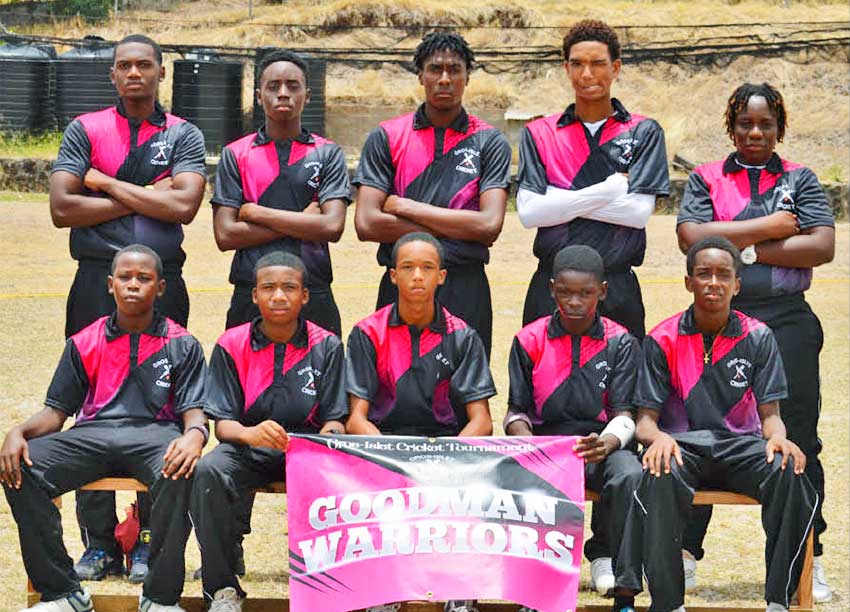 The tournament is 50 Overs per side, but teams bat on alternate days.

Going to press before the start of play on Day 1, it was uncertain which of the two teams batted first in the matchup between Melius Warriors captained by Kimani Melius and Goodman Challengers captained by Tyrel Chicot in the absence of Jard Goodman. Goodman who is currently studying overseas is expected back on island in the coming days.

Saturday 11th May 2019 despite a late start and humid condition saw the grand opening of the tournament with the march past of teams, followed by addresses from a number of stakeholders including President of the Gros Islet Cricket Association Joseph Hall, President of the Saint Lucia National Cricket Association Julian Charles, Director of Sports Patrick Mathurin, Parliamentary Representative Lenard Montoute and President of the Gros Islet Youth Council Raejean Montoute, while the Master of Ceremonies was Tennyson Glasgow.

President of the Gros Islet Cricket Association Joseph Hall congratulated the Gros Islet Under-19 team for winning the Sandals Inter District Under-19 competition for the second year running, but for the fourth time overall. Opening batsman Lee Solomon came in for a special mention for scoring three centuries in the tournament (126, 157 and 157), a record for Under-19 cricket in Saint Lucia.

There was also special mention of Kimani Melius, Qiana Joseph and Kymani Sexius. Hall said “Sexius is the only player from the Windward Islands in the ‘Pace Like Fire’ programme and he will be heading to Barbados for a three year course.”

He added, “Our work in Gros Islet has not been easy, but with the support of members on the committee and Alton Crafton and the John Eugene Academy, our players are now starting to gel.”

“Our emphasis is to push the youth forward. We have invested in the Under 15s and Under-19s, including the young umpires. Our programme is to uplift and to develop players in all aspect of the sport,” noted Hall.

SLNCA President Julian Charles commented, “I am really pleased this competition is happening, because one of the issues we have in Saint Lucia is that we do not have our affiliates playing the amount of cricket they ought to play within their respective districts. We are only as strong as our weakest link, so it is very important that the districts put on competitions like these.”

He continued, “I want to see players stay in the game. We have a situation where players are currently been nursed here, its fine, but as soon as they get to 19-20 years old, we tend to lose them. Players, you must realise this is something you do for life. Whether you become a great player, you cannot be aspiring just to play a few games and call it quits. Some of you will want to go on to be great players, but even if you don’t go on you have to see this as part of your education in life; how you mix with each other, how you face defeat and how you face victory.”

Director for Sports, Patrick Mathurin said, “It’s always a joyous occasion when you compete in a competition because you have worked hard, and the only time you can enjoy what is it you have practiced for is when you have a competition, such as this one.”

Mathurin was not sure whether he wanted the Gerson Strikers to win the competition for a second time. He said, “I am not sure any one of you should be worried about them winning again; you play hard and at the end of the day, whoever comes out on top will be crowned champions.”

Parliamentary Representative for Gros Islet Lenard Montoute during his remarks stated, “I am heartened to see the number of young people who are lined up here today. Some might feel because there are not many seniors around it is a setback, but it speaks volume to what is taking place in Gros Islet, and it tells us what we can expect in the future as far as Gros Islet cricket is concerned.”

Montoute made special mention of the Gros Islet Under-19 team as the SLNCA/Sandals Inter District cricket champions, and expressed congratulatory remarks to Qiana Joseph, Kimani Melius and all the young people from Gros Islet who have represented Saint Lucia at the regional and international levels.

“I want to encourage those of you here to see this not only as a past time; yes participation in cricket will do something for your health, it also will do something for your personal development and your character. You are at the stage in your life where you can look to great things coming out of cricket given the many opportunities that are available for you to become professional players. I know it is not all of you who will emerge as professional players, but I would like to see as many of you as possible especially the exceptional ones, going all the way and ensuring you make it to the top.”

Also on Saturday, in the grand final of the Cricket O Rama to launch the 2019 competition, Melius Challengers defeated Edward Blasters by 8 runs. Batting first, Melius Challengers scored 80 runs for the loss of 4 wickets in 6 overs. Kimani Melius (24) and Dominic Auguste (20).

Requiring 81 runs for victory, Edward Blasters scored 72 for the loss of 3 wickets in their allotted 6 overs with Sheldon Busby scoring 29.

At a brief awards ceremony, the following players and teams were recognized: