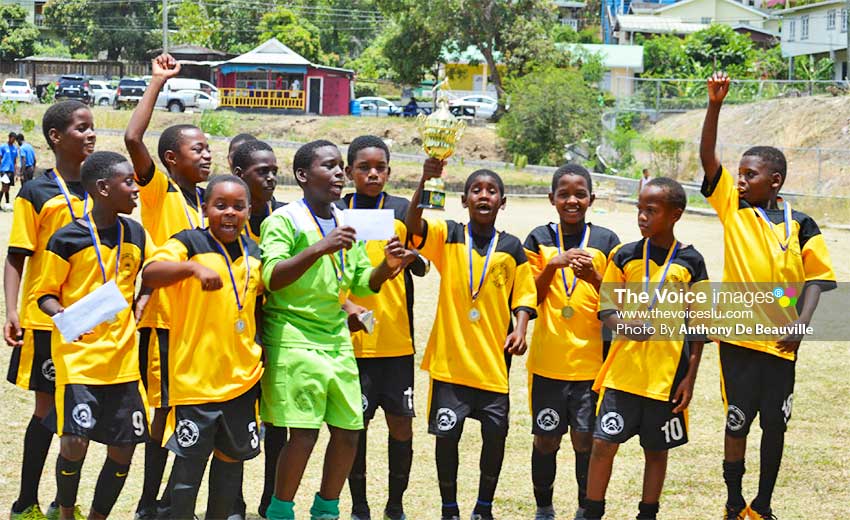 It was all Northern United FC when the curtains came down on the Saint Lucia Football Association Inc. Northern Zone Under-11 and Under- 13 football competition at the Corinth Playing Field on Saturday 25th May 2019.

Under what can best be described as ‘scorching heat’, the grand final of the Under-11 played between Valley Soccer and Northern United lived up to expectations as spectators were treated to a high level of attacking, fast paced and entertaining football, with both teams enjoying scoring opportunities at either end of the pitch.

However, stubborn defending by both teams resulted in a goalless first half.

On the resumption it was no different; however, Northern United FC looked the more dangerous of the two sides as they kept pressuring Valley Soccer FC. The relentless assault paid dividends as Northern United FC were able to score two unanswered goals to successfully defend their title.

In the preceding Third Place Play Off, Lancers FC made light work of Monchy FC to triumph 7 – 0. The goals were scored by Torres Harris in the 3rd minute, Keenan Joseph in the 10th and 13th minute, Mickel St Claire in the 15th minute, Kwan St Luce in the 20th minute, KrishonneAmedee in the 25th minute and Klein Maurice in the 28th minute.

The following Awards were presented at the end of the Under -11 competition.

The finals of the Under- 13 matchup between Lancers FC and Northern United FC did not disappoint as both teams gave a fine account of themselves.

In the end the determination of Northern United FC prevailed as they ran away winners 2 – 0 to be crowned champions.

They got their goals from Samuel Loisien via the penalty spot in the 35th minute and Lindo Alcindor in the 65th minute.

They owed their win to an own goal by Aziah Thomas and Keane Christopher’s brace in the 2nd and 11th minute.