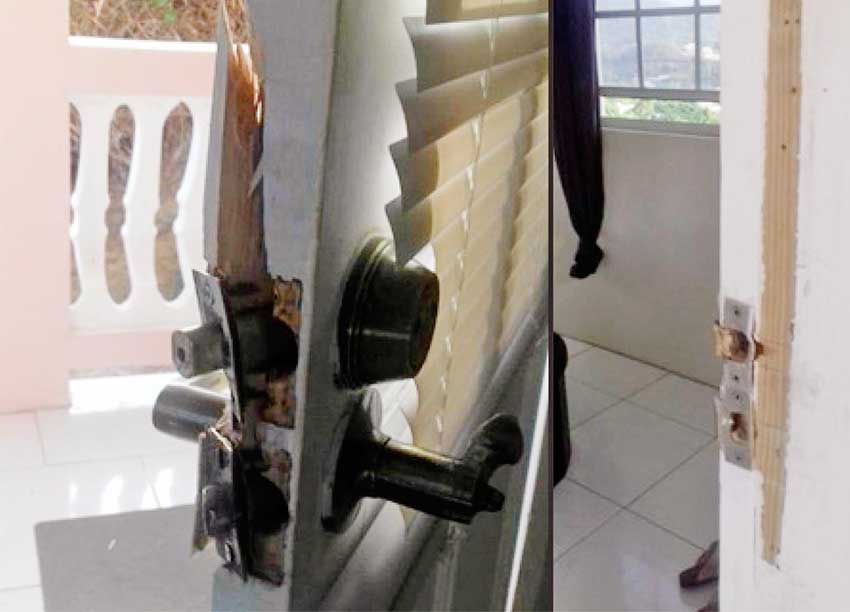 Reports from one of the scenes suggest that individuals forced themselves into a downstairs apartment of a female occupant who was at work at the time.

According to the house owner, when he got home he realised that thieves had destroyed the locks for the front door of the apartment to make their way inside. Based on the damage he saw, he also surmised that they had also made several attempts to break open the burglar bars adjacent to the door.

The house owner who is a hotel employee said, “When I got home, I saw bits of wood at the front of the house and upon investigating, as I made my way upstairs, I saw the front door wide open. I immediately called the police who responded in less than 15 minutes. I am not sure whether they were in close proximity when they received the call, and diverted to the scene”.

The owner of the property says he immediately contacted the young lady who occupies the apartment and upon arrival she was shaken up after seeing what the thieves had done.

Among stolen items were a 32’ Smart TV; Apple IPad; IPhone; Android Box; brand name bags and slippers and two cases of water. The female occupant also reported that the bandits had escaped with new clothing (still in the box) that she’d just ordered, as well as clothing items from her wardrobe.

Meanwhile, on the same day and just minutes from this reported incident, another home was also burglarized.

This reporter spoke to a resident from the area who is a police officer who said, “They are back here again. It appears the Neighbourhood Watch in the area isn’t working effectively anymore. We have had several break- ins in the past to include car theft.”

The owner of the house where the second home invasion took place who did not want to be named said, “The Neighbourhood Watch was working but it looks like it’s only working for certain people in the area.”

“People come together only when they want to clean the drains, cut overhead tree branches and repair the roads when they see fit,” he added.

Police are investigating both incidents.