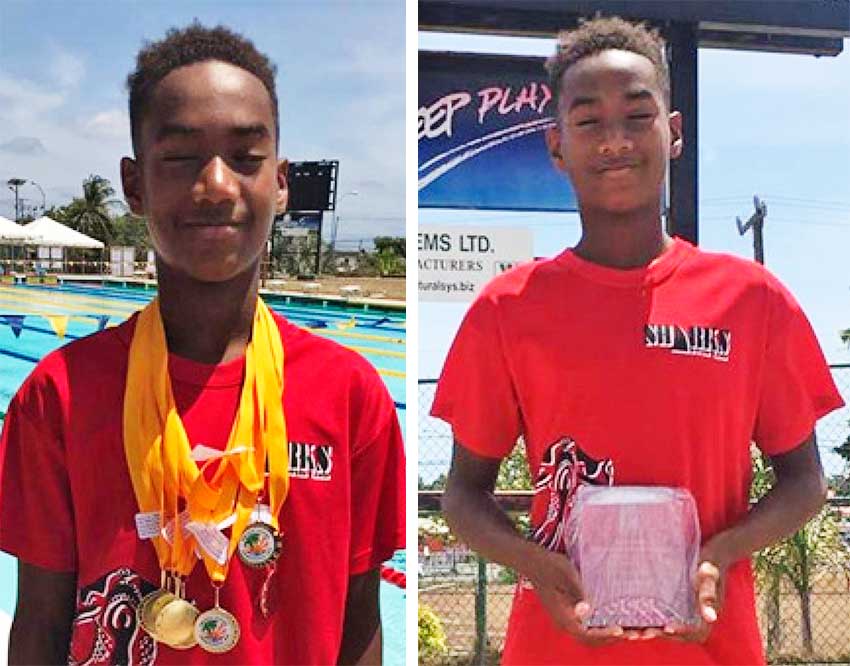 Forty two swimmers from the Sharks, Lightning Aquatic, and Seajays swim clubs participated in the 28th edition of the Aquatic Center Invitational in Barbados this past weekend.

It was the final qualifying meet where swimmers from Saint Lucia had the opportunity to qualify for the Central American and Caribbean Swimming Federation (CCCAN) Championship scheduled for June 28th 2019. It was also a meet where swimmers simply competed with the hope of improving their times and having an opportunity to see where they stood against other islands in the region.

When the dust settled and final tabulations made, the Saint Lucia teams of Sharks, Lightning and Seajays walked away with 17 gold, 6 silver and 8 bronze medals.

In the 9 -10 year category, Antoine Destang was a rising star at the meet achieving the overall Age Group 1st Place winning title. Worth mentioning, this is the fifth time Destang has walked away with the title. Also, in a feat that has never been seen at this event, Destang also broke 7 Meet Records in the 200 Meter Individual Medley (IM), 50 Meter Back Stroke, 50,100, 200 Meter Freestyle, 50 Meter Butterfly and 50 Meter Breast Stroke.

Coach David Peterkin said, “Antoine swam seven events, and got seven gold and set seven meet records. I asked the organizers to check to see if it was done before and the reply was, ‘Don’t think so’”.

“In the 50 meter fly he swam 28.77 seconds which would have given him the silver at this year’s Carifta Swim Championship, but he was too young to go as he is still in the 9-10 age category. The record at CARIFTA for the 11-12 boys 50 meter was set by Dylan Carter way back; it was 28.05 seconds. Antoine has two years to break that and at the rate he is developing that is very possible,” added Peterkin

The Saint Lucia Aquatics Federation congratulates all 42 participating swimmers on their individual achievements and looks forward to announcing its representing team for CCCAN.

The Federation also invites Saint Lucians to come and be part of its Open Water Carnival on Sunday 9th June 2019 at Pigeon Island next to the Landings Hotel. Food and drinks will be on sale to help raise much needed funds for its swimmers participating in the CCCAN Championships.