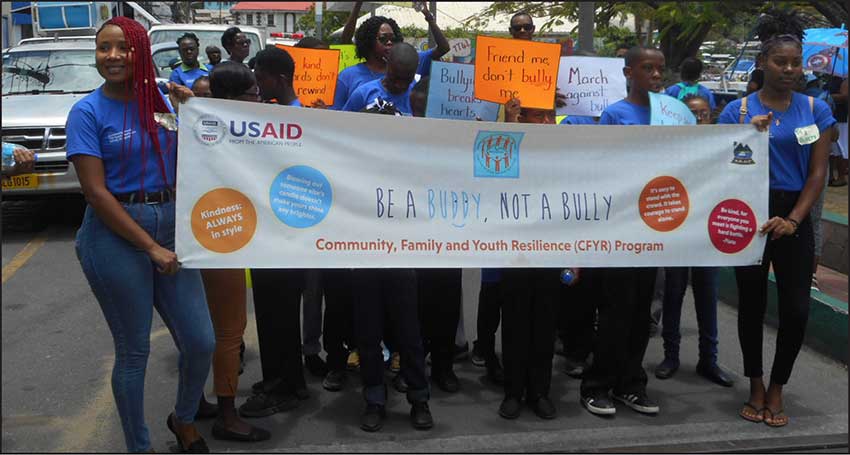 Education Officer for District 8, Shervon Mangroo, has made a clarion call to students of Soufriere to denounce bullying in any form or fashion.

She was at the time addressing students of primary and secondary schools in Soufriere at an anti-bullying campaign held in the community on Wednesday.

The campaign took the form of a march along the streets of Soufriere which saw the students carrying placards with messages speaking against bullying, and a ceremony where various speakers spoke of the effects of bullying and the need to put an end to it. It was organized by the Soufriere Regional Development Foundation (SRDF) and the Soufriere Enhancement Committee.

In her address, Mangroo implored the students to play their role in discouraging bullying which she said should not be tolerated in our society.

“Report the matter to the police….” she advised the students.

Mangroo said she knew parents who were victims of bullying which had left them with scars, though not visible, which had affected them in many ways.

“Bullying is a learned behaviour therefore it can be changed,” Mangroo said. “Its effects are life- changing.”

She said our education system is guided by the core belief of respect.

“Respect oneself and the right of others as we build a better Soufriere and by extension Saint Lucia,” Mangroo implored.

Community Engagement Officer of the Soufriere Regional Development Foundation, Glyndia Charles, in her address said bullying is a major social and health issue faced by millions of school- aged children and adults around the world, including St. Lucia.

She said it involves physical, verbal, relational and cyber forms of aggression and abuse.

“Sadly, we in the picturesque town of Soufriere and by extension, St. Lucia, have not escaped what is now quickly becoming a plague. Bullying has become a threat to one’s very existence. We all must remember the suspected case of the late Gervais Emmanuel of Rocky Lane, Dennery,” Charles said.

She said that if a victim survives, that individual is typically left with the emotional scars for the duration of his or her existence, adding that no one heals himself or herself by wounding another.

“This threat to life must be addressed by each country, each community, each relational group, and each individual. Today’s march is a great example and demonstration of what must be done to stand up against this unacceptable behaviour,” Charles explained.

She said the onus now lies on us as individuals in whatever capacity we serve, to protect a healthy way of life, not only for ourselves but for future generations.