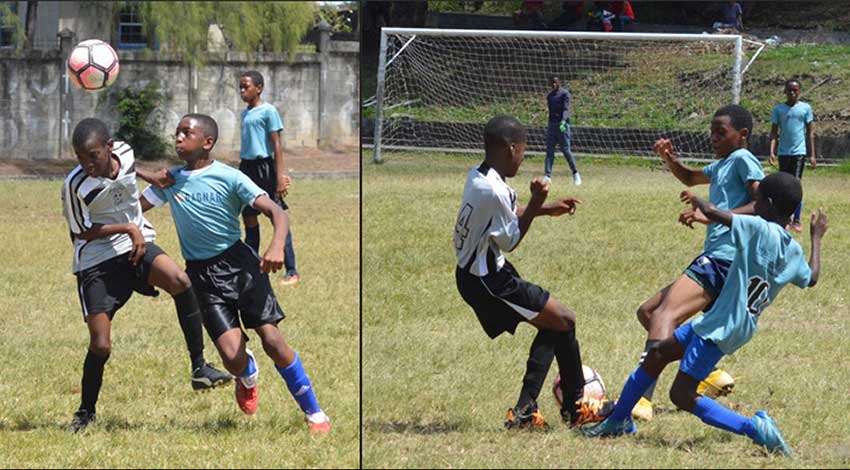 In the first encounter played at the Phillip Marcellin Grounds in Vieux Fort, Big Players, playing their final game, defeated Knights 2 – 1 following a goalless first half.

Big Players got their goals from Valdez Maximin in the 55th minute and Jordan St. Ange in the 88th, while Garvin Kisna scored for Knights in the 52nd minute.

In the evening’s second game Uptown kept their title hopes alive with a well-earned 2 – 0 victory against El Ninos with goals from Jevic McFarlane in the 17th minute and Antonio Joseph in the 25th minute.

Two games were played at the Marchand Grounds on Sunday 14th April 2019.

In a very spirited display, Ti Rocher after trailing 2 – 0 stormed back to defeat Monchy FC 3 – 2 in the final minutes of the game.

Monchy had a last chance to equalize but squandered right in front of the goal with the player striking the ball high over the cross bar.

Ti Rocher’s goals were scored by Dwayne Mason in the 72nd minute, Dillon Joseph in the 85th minute and Miguel Cooper in the 88th minute.

Aramis Gilbert scored a brace in the 45th and 59th minute for Monchy FC.

In the final game played on the evening, Northern United enjoyed a 5 – 1 victory against T Valley.

Troy Edward scored a brace in the 43rd and 62nd minute, with one goal each from Ed Williams in the 7th minute, Selwyn Boyce in the 65th minute and Jeremy Abraham in the 74th minute.

Following eight rounds of matches, the tournament leader Uptown, interestingly perched with 20 points, was followed by defending champions Platinum with 17 points and VSADC with 15 points.

However, both VSADC and Platinum have two games in hand in comparison to Uptown’s one. VSADC’s remaining games are against Ti Rocher and Platinum, while Platinum’s other game is against El Ninos.

The VSADC versus Platinum encounter will prove very crucial to the title race.

Matches continued in the SLFA Inc. Under-13 competition in the Northern Zone at the Corinth Playing Field on Sunday 14th April 2019, where a total of 21 goals were registered.

Lancers defeated New Generation 2 – 0 with goals by D’Andre Preville in the 20th minute and Deshaun Paul in the 34th minute.

Joel Alexander registered a beaver trick in the 9th, 28th, 54th and 79th minute; Leonce Soopal a hat trick in the 48th, 60th and 72nd minute; Joseph Bennette a brace in the 22nd and 46th minute and Jordan Toolsie in the 12th minute.

Devin Michaillie pulled one back for Monchy FC in the 30th minute.

In the final game played Northern United thrashed Pioneers 8 – 0. Samuel Louison registered a hat trick in the 3rd, 10th and 54th minute. London Alcindor got a brace in the 12th and 51st minute, while there was one each by Jerrel Fedee in the 30th minute, Angelo Esper in the 56th minute and an own goal in the 58th minute.

It must be noted that the scoreline does not reflect the level of exhuberance and enthusiasm displayed by the young players in all the games played on the day.

In the first encounter Sarrot FC was in a no nonsense mood as they sent RV Juniors FC packing 7- 1, to book their place in the semifinals.

They were led by Curtis Edward with a hat trick in the 52nd, 75th and 80th minute, and a brace by Jason Similien in the 63rd and 82nd minute and one each by Polius and Eleuthere in the 44th and 50th minute respectively.

In the other game 1987 All Stars cemented their place in the semifinals defeating Obla FC on penalties after the game ended goalless.

The Under-11 teams in the SLFA Northern Zone Youth Tournament continued with the four games scheduled in the third round.

As usual, the young hopefuls did not disappoint with their talent or their enthusiasm, registering a total of twenty goals over the weekend.

Valley Soccer got the better of Big Players 4 – 1. Omarion Edwin scored a hat trick and Levi Stiede one for Valley Soccer, while Kaden Louis scored for Big Players.

B1 FC enjoyed a comfortable 3 – 0 victory over Flames United. Rashad Herman scored a brace and Fareed Felix the other for the victors.

Matches will be suspended this coming weekend and will resume on Saturday 27th April with four more games at the SAB Sporting Facility from 10.00 a.m.

Over at the Marigot Playing Field two games were played in the Western Zone Under – 13 SLFA Inc. Football Competition.

No Fear defeated 87 All Stars 3 – 0, with their goal scorers being Daniel Lansiquot in the 19th minute, John Wilfred in the 33rd minute, and Jaden Regis in the 49th minute.

In the other game played CT Foundation had a comfortable 4 – 0 victory over RV Juniors. There were braces by Jeremiah Berthia in the 5th and 41st minute and J. Phillip in the 15th and 36th minute.

Meanwhile, 1987 All Stars were the proud recipients of a brand new football kit, courtesy of Kimberly Francis, wife of Minister for Social Justice, Senator Hermingild Francis.

The Club is very thankful for this kind and timely gesture which they say will continue to contribute towards the development of the youth through sports.