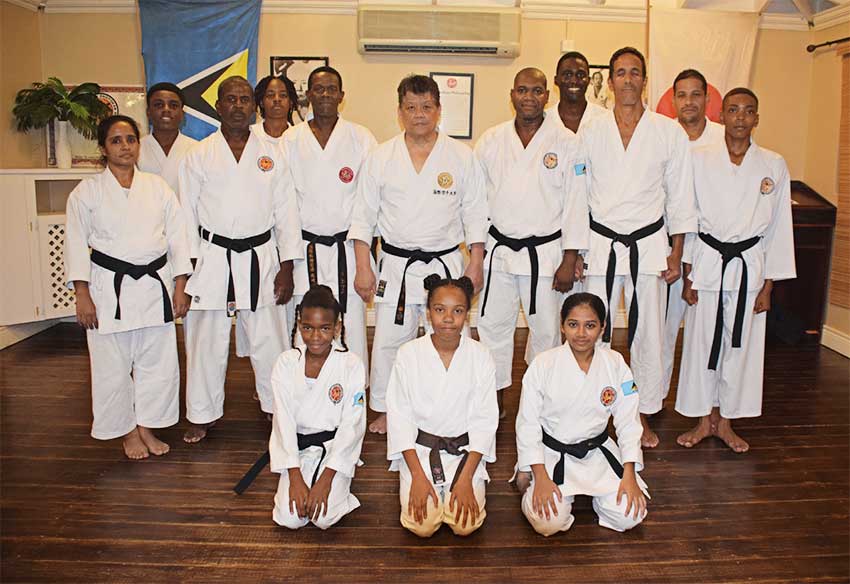 THE Saint Lucia Shotokan Karate Association (SLSKA) in the commemoration of its 25th Anniversary Celebration hosted Shuseki Shihan Frank Woon A Tai – 9th Dan from the International Karate Daigaku (IKD), headquarter in Toronto, Canada, from 19 to 22 March 2019. The IKD which was established in February of 2011 is celebrating its 9th year of tremendous growth with membership in 46 countries worldwide.

On this occasion Master Woon A Tai conducted training seminar for all ranks of the local affiliate including Instructor Trainee Courses and general training at its HQ the Kevala Taj Dojo on Rodney Bay, situated at the Harmony Suites Hotel Conference Room. He also officiated the 58th SLSKA/IKD Grading Exercise (exams) for approximately 25 members at the Gros Islet Secondary School Auditorium on Thursday 21st at 6:00 p.m.

Sensei Patrick A. Edward – 5th Dan, Chairman & Resident Chief Instructor of the SLSKA expressed his thanks on behalf of the local affailiates. “I want to thank Master Woon A Tai again for always coming to Saint Lucia to share their martial experience,” he said. “Anybody who was in the Tuesday and Wednesday, experienced some really good karate.We’re celebrating our 25th anniversary. It has been a wonderful experience. When we launched on November 30th we brought Sensei Shim here to commence the celebration, we had the curch service, our brunch and the Anou-Wey Independence Parade gave us some good publicity that we are very gretful for.”

Celebrating his 51st year as an instructor Master Woon A Tai every year travels the IKD world administering the affairs and ideals of the affiliates to ensure world class standards. His tour takes him to 9 Caribbean Karate College Countries including Guyana, Barbados, St. Vincent, Grenada, Trinidad, Antigua, Jamaica and Saint Lucia.

Shuseki Shihan WoonA Tai, was born in Guyana in 1950, and began training in 1964. He holds a B.A degree in Japanese Studies from the University of Toronto. In January 2011, he resigned from the ISKF as Chairman and Technical Director of ISKF Canada, and co-vice Chairman of the ISKF Technical Committee to establish the International Karate Daigaku (IKD).

After training in Japan in the early 1970s, he continued his training, until recently, under the legendary Master Teruyuki Okazaki, 10th Dan for 40 years. He also trained under Masters: Yutaka Yaguchi, 9th Dan, Hidetaka Nishiyama, 10th Dan, the great Masatoshi Nakayama, 10th Dan.