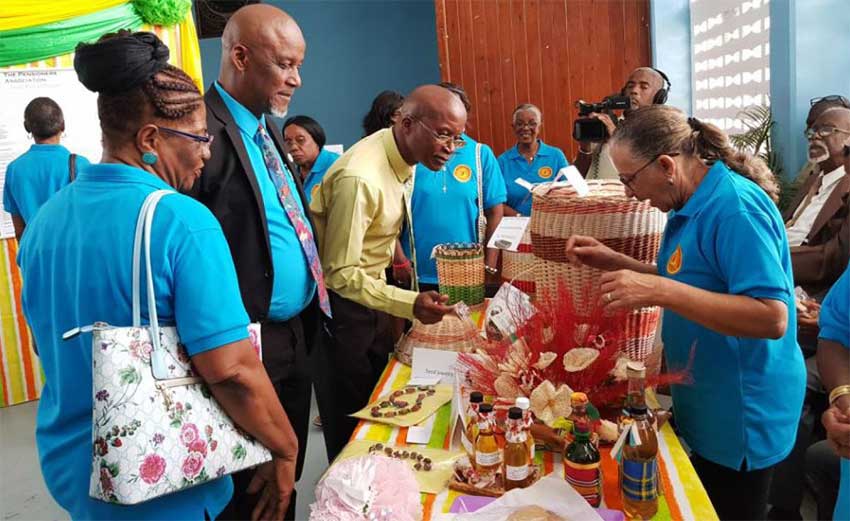 During this period the Association has had seven presidents in the persons of deceased Martin Elwin, founder of the Association, deceased Kenneth Combie, Ms Georgiana Sarguisingh, Cornelius Lubin, Keith Weekes, Ms. Martina Mathurin, Gregor Biscette and the current president who is serving her second term of office is Mrs. Remise Anthony.

“Our membership has increased over the years though not at the rate we desire but this is ongoing project,” a representative of the Association said. “At the moment we have 12 living Honorary Members, 11 of whom have attained the age of 90 years. Nathan Philips, Mrs Marjorie Joseph, Nelson Ferdinand, Miss Simone Septembre, George Emmanuel, Mrs Orphana Williams, Leon Francis, Pamela Baptiste, Sir Leton Thomas, Andrew Wilkinson, and Daphne Murray. Honourary Membership was conferred on Ms Alicia John for seventeen years of service to the Association.

The Association has made tremendous strides in becoming more recognised in the community, and the number of activities they have undertaken over the past four years can attest to that.

“Our motto is ‘Your well-being is Our Business’ – this means that we are committed to ensuring that our members enjoy the fullest of their retirement years. We choose to highlight the past four years because at the 30th anniversary a magazine was produced.”

Every year during the Lenten season the Association organises a day of reflection for members. They recently concluded a retreat at Latanier Gardens at Augier, Vieux Fort. Seventy-two members attended the activity. The theme was ‘Peace’. The Association says members usually feel rejuvenated after these sessions.

With the belief that one is never too old to learn and acquire knowledge, The Saint Lucia Association of Retired Persons Inc. also focuses on education and health. Members in the north and south of the island benefitted from an ICT Training which was coordinated by the Government National ICT Centre in 2017. This provided members with the ability to embrace ICT with a higher degree of confidence.

Resource persons have conducted interactive sessions on topics such as diabetes, cancer, care of the feet, and backyard gardening, to name a few. The Association’s focus from 2018 has been on healthy living and in that regard screening activities were held at the Dennery Human Resource Centre and the Wellness Centre at La Clery. This was in collaboration with the Ministry of Health and Global Clinics Laboratories. Members as well as the public took advantage of the tests, with a notable number of men turning out for prostate tests.

“Our members look forward to attending social functions and one such activity is the Christmas lunch which is held at a different location each year. A cruise has been organised for the past three years and many members as well as other persons have taken advantage of this,” said Alice Stephen, Public Relations Officer for the SLARP.

On August 1st the SLARP will host its ‘Members Day’, which is typically a day spent relaxing at a hotel “having fun.” Their main fundraiser is a Variety Show held on Easter Monday. Members participate in a host of performances including modelling, a hat parade, singing, dancing and acting. The proceeds of the show go towards the SLARP’s Special Assistance Fund for members. On April 22 (Easter Monday), the Association will be hosting its fourth Variety Show at the National Cultural Centre from 2.00 p.m. Tickets are available from members.

The Association has in the past undertaken expeditions to Descartier and the Tet Paul Nature Trail. October 1st, 2018 marked the inaugural hosting of their Seniorlympics Fun Games was held at the Philip Marcellin Grounds. in Vieux Fort with support from the Ministry of Youth and Sports and sponsorship from several Business places and Cooperatives. Association members and also members of the Club 60s participated in the successful endeavour.

During the month of May which is designated as Reading Month many members participate by visiting various schools around the island. Some of the Association’s members are facilitators at the select workshops organised by the Training Division of the Public Service for prospective retirees, and use the opportunity to market the Association.

Periodical visits are made to home-bound members; and hampers have been given to the Homes for the Elderly and select members of the Association at Christmas.

Last year for the first time during their Anniversary in March, the SLARP hosted a mini exhibition at the Castries City Hall which was well received by the public. Members displayed their own handicrafts, pottery etc.

With wide reaching networking and assistance efforts, the SLARP congratulates all its members on the 34th Anniversary, and looks forward to exciting times ahead.

Visit the SLARP’s page on Facebook for more information.