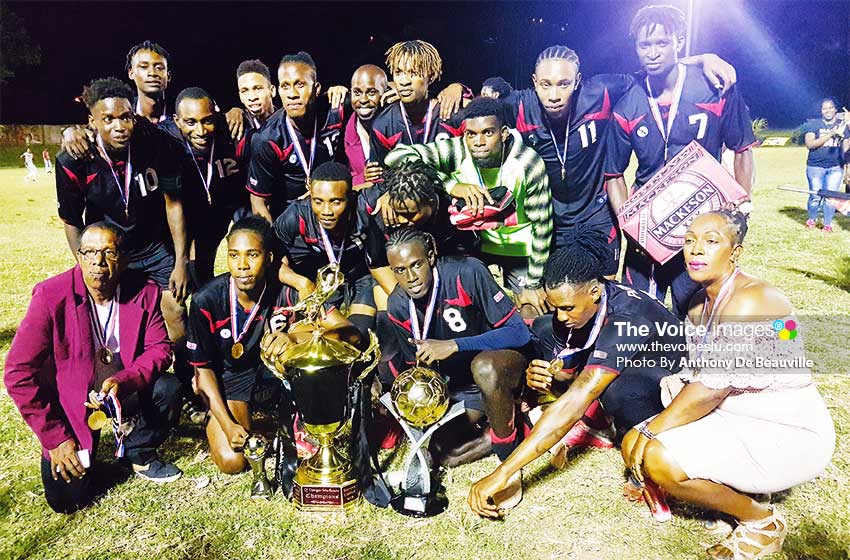 Piton Travel All Stars got to the finals with a 2-0 win over On The Rock Strikers, while Chesters FC won by a similar margin to eliminate Survival FC out of championship contention.

As predicted by one of the Tournament officials, Hendricks Constable, one week earlier; the 2019 finals would be the best ever at the La Ressource playing field and yes, it kept up to the hype as tournament favourites Piton Travel All Stars was made to work hard throughout the entire 90 minutes of regulation time.

For Chesters FC they can take a bow, but can only blame themselves – their No. 8 Sherwin Simon squandered the first penalty kick in the shootout that went miles above the cross bar.

Marlon Gilbert put Chesters ahead in the 34th minute of play to start a mini carnival celebration both on and off the field; but Piton Travel All Stars never once allowed their shoulders to dip when in the 43rd minute their No.8 and leading goal scorer Ridel Stanislaus missed a clear scoring opportunity in front of goal. However two minutes later on the stroke of halftime (45th minute) PTAS No.6 Marvin Joseph equalized when his right foot shot eluded a nervous Chesters FC custodian Sian Andrew to send the Piton Travel All Stars crowd into a frenzy (scores 1-1).

On the resumption it was all to play for as both teams upped the tempo, allowing the fast paced game to continue; Chesters FC was up and running hitting the woodwork in the 46th minute, Piton Travel All Stars too showed some brilliance on the pitch when one of the players took a right foot shot in the 74th minute from way outside the 40 yards box only for Chesters FC goalkeeper Sian Andrew to paddle the ball over the cross bar for a corner (what a shot it was indeed).

Despite a hard-fought second half no further goals were scored.

In the dreaded penalty shootout, Piton Travel All Stars won 4-3.

The goal scorers (PK) for Pition Travel All Stars were No. 9 Parker Gilbert, No. 7 Anthony Joseph, No. 12 Maguydier Raymond and No. 8 Ridel Stanislaus.

For Chesters FC the penalty goal scorers were – No 7. Michel Edan, No. 15. Johnson Joseph and Dillan Sonson.

This was a crowning moment for Piton Travel All Stars Head Coach, Camillus Mathurin and this is what he had to say following the epic battle on the pitch. “It was a hard fought game, Chesters FC surprised us – they changed their game plan from passing the ball in the centre of the field to the long ball. We made some adjustment for that. We also changed our defender and it worked. It was a very good game.”

Mathurin said, “We have been in every final of the DJ Dongar/Mackeson Invitation Tournament for the last four years, so it was no surprise. We started preparing from October 2018. I was surprised that we did not score enough goals in the match.”

What next for Piton Travel All Stars? “We want to prepare for the SLFA President Cup and we also want to keep the team in training and hopefully we can make it to the first division, I think we belong there,” Mathurin added.

Though his team did not win, Chesters FC Head Coach Haze Constantine still had the strength to speak to the VOICE following a great outing by his team in the final. “I believe it went wrong when my center back got an injury, and in the 45th minute there was a loss of concentration in the defense and Piton Travel All Stars capitalized in our lapse.”

He continued, “I am pretty satisfied with the overall performance of my team; in a penalty shootout anything can happen. In terms of the tournament, it was well executed and thumbs up to the organizers for giving us an opportunity to showcase our talent.”

For the third place silverware which kicked off at 6.00 p.m., On the Rock Strikers (Dennery) came from 1-0 down to defeat Survivals FC (MabouyaDennery) 2-1.

Cassi Janvier opened the scoring for Survivals in the 4th minute; while Nicarge Edward equalized for On the Rock Strikers in the 32nd minute; 1-1 at the halftime whistle.

In the second half On the Rock Strikers nosed further ahead as Sylvarius Vidal scored in the 70th minute to seal victory for his team.