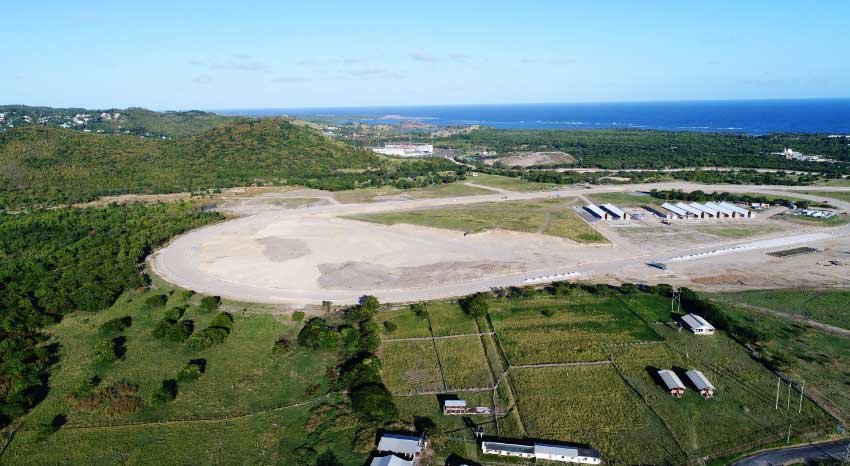 THE goalposts continue to change with respect to the first phase of the DSH (Desert Star Holdings) project, namely the horse racing track in Beausejour, Vieux Fort.

Its opening date has again shifted, perhaps for the third or fourth time to December 13 of this year as disclosed by Prime Minister Allen Chastanet this week. It also seems that the inaugural horse race will take place on that day as well.

“We have decided that December 13 will now be the new official date for the launching of the horse racing track and we are busy putting plans together to not only have the first race but also to showcase the development of the country by that point,” Chastanet said.

Government had at one point projected the first race on the tracks for February of this year as part of the island’s 40th Anniversary of Independence. Before that October of last year was outlined for the completion of the tracks.

Around that time, it was said that about 200 horses were being targeted to race on the tracks. Another viewpoint was that the tracks would be completed by the end of 2018 with the inaugural race set for February of this year.

There has been no short supply of delays related to the track’s opening – at one point work ceased on the site. There have also been periods of inactivity due to a dispute over a section of the 300 acres of land allotted to DSH by government for the track.

Back in the early days DSH Chairman Teo Ah Khing said the horse track would be built out of his pocket to the tune of $5 million. Last year he said his company (DSH) had committed over US$10 million toward the cost of the track, an amount, he said, that may very well increase as facilities are built around the track.

Back then there was also talk that the money Khing would spend on the track would be returned to him. It was Prime Minister Chastanet in early 2018 who said that the money spent by DSH on the horse track, including the stables and other supporting facilities, will be reimbursed to DSH through the Citizen by Investment Programme (CIP).

Said Chastanet at the time: “We will have a quantity surveyor determine how much money is actually spent on the horse racing track, which to us are also the stables. Those monies will then be reimbursed through the CIP in which they (DSH) are responsible for marketing the CIP. Once the track is paid for, we will then take back ownership of the land and so no longer will there be a lease,” Chastanet said.

Whether this still holds is still unclear although Prime Minister Chastanet, at Monday’s press briefing, was asked whether there was a clause in the agreement with DSH whereby Saint Lucia would buy the horse track from DSH he said: “Not that I know of.”

In fact, the prime minister back in early 2018 said that should Saint Lucia end up holding ownership of the horse track the China Horse Club would be contracted to manage and operate the facility.

Now a new factor has been added in the mix – horse racing associations from around the region. Prime Minister Chastanet this week said that associations from Trinidad, Martinique and Barbados were on island and were all impressed at the standard of the facility at Beausejour.

“We have been working to ensure that this (horse track) is a collaborative effort for the Caribbean,” Chastanet said.

As for the ‘Pearl of the Caribbean’ project things too have changed. Anse Des Sable, comprising about 92 acres of land or thereabouts, is no longer in the hands of the DSH company for development. Invest Saint Lucia are the new developers of these lands and according to Chastanet he is excited about that.

“(I’m) also excited by the initiative of Invest St. Lucia at Point Sable. This is a project I personally wanted to see for a very long time. There have been several town hall meetings with the community, there are billboards up and we are finalising with the DCA the final plans,” Chastanet said.

He said a new road would be cut starting at the end of the runway that is close to the concrete road leading into the town of Vieux Fort. The prime minister said the road will be cut parallel to the airport fence and go all the way into Vieux Fort.

“The land that will be between the concrete road and going backwards is about 100 acres of land. The goal here is to subdivide it, put water, electricity and sewerage facilities in and to make the concrete road into a broad walk. As we indicated from the onset there was never the intention of putting any development on the Point Sable beach. The goal is to keep the beach public, improve the public facilities in that area and allow the development to take place behind the concrete road. Lands will be made available to locals. We are putting a special concession package together particularly for locals and regional investors,” Chastanet said.