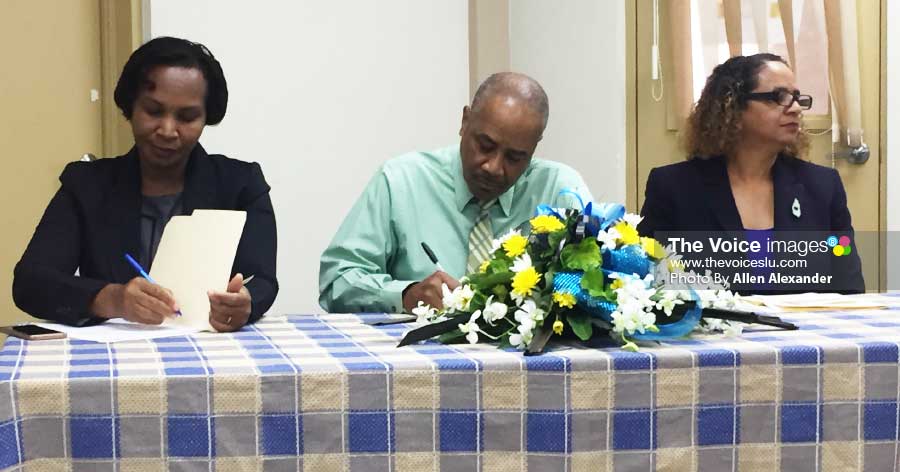 A media launch of Public Service Announcements (PSA), presented by the National Emergency Management Organization (NEMO) and the Vieux Fort South District Disaster Committee, was held on Tuesday March 12, at the Offices of NEMO in Bisee. The purpose of the event was to elevate public awareness on the importance of PSAs as it relates to disaster preparedness, through the effective dissemination of relevant information to all members of the general public.

Present at the launch was Andrew George, Programme Development Officer of NEMO and Master of Ceremony of the launch; Dorine Gustave, Director of NEMO; Dr. Alexia Cooke, Regional Technical Coordinator of the Caribbean Disaster Emergency Management Agency (CDEMA); Benjamin Emmanuel, Cabinet Secretary at the Office of the Prime Minister; Velda Joseph, Permanent Secretary of the Ministry of Equity, Social Justice, Local Government and Empowerment and; a representative of the Vieux Fort District Disaster Management Committee.

The PSAs are focused on educating the public on disaster risk reduction, and are aimed at empowering community members with practical guidelines for hazard impacts; through the use of theatre. The initiative for the PSAs was presented by the Vieux-Fort South District Disaster Committee, and was conceptualized with the assistance and support of the NEMO Secretariat in 2016. The concept was completed in 2017 and a proposal was submitted to the USAID under the Small Grants Portfolio. The proposal was approved in October of 2018, and the sum of US $21,500 was granted by USAID to fund the project. The PSAs are designed with the view to inspire every household within every community to participate in the disaster risk reduction and awareness initiative.

Dorine Gustave stressed the important role of the media in disseminating the PSAs to the general public, as she expressed the need for media assistance in the project. She announced the immediate release of the Tsunami PSA which is intended to coincide with Caribe Wave 2019, which is being launched today March 14th. The hurricane PSA will be released in May before the start of the hurricane season, in order to “adequately sensitize the public in preparation for the season,” as stated by Dorine Gustave.

Benjamin Emmanuel, in reference to the creation of PSAs, highlighted the significance of the value and timeliness of information as it pertains to disaster preparedness. He emphasized the need for creativity in the production of PSAs, in order for them to be successful in reaching the intended target. He said that all medium of communication, including drama, must be utilized to make the PSAs attractive to all sectors of the general public.

Velda Joseph stated that disasters were not created by the forces of nature, but by a nations’ lack of preparation for the natural and man-made hazards that occur. She spoke of the important role of theatre in making PSAs attractive, effective, and acceptable to all. The PSAs are produced in English and Creole, with the participation of both adults and children, and incorporates sign language as well. A general request for media support in presenting the PSAs to the public was made by speakers at the launch.

There was also a brief overview of a project which was presented by Dr. Alexia Cooke, which she stated was structured “to reinforce community, national and regional counterparts’ preparedness capacity, with the aim of reducing economical losses and to support community resilience.” The project began in June of 2018 and is scheduled to end in November to December of 2019. It is supported by the EU which made a commitment of £1.3 million, in addition to a co-finance sum of £213,000. One of the visions of the project is to develop a reliable, trustworthy, and accessible Caribbean-owned multi-hazard early warning system, with the goal of saving the lives and livelihoods of the Caribbean people.