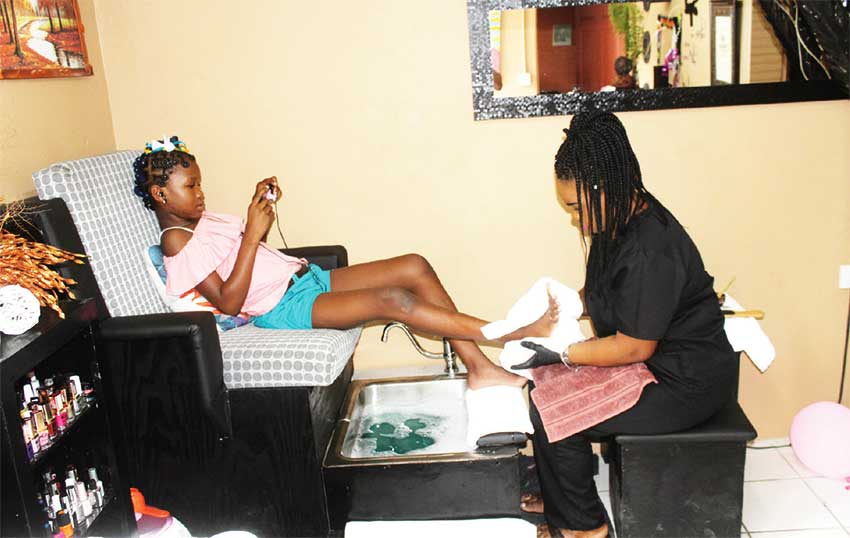 FOR most people the risks involved in becoming an entrepreneur are enough to send them running for heights of Mt. Gimmie and quite frankly who could blame them? The lack of a steady pay cheque and the use of your personal savings to see the business through would have anyone questioning their sanity for starting their own business.

Thankfully, Joanne Stanislaus is not like most people. She welcomes a challenge and when it was time to break the norm and introduce a new business to her community, she went in blazing! Born and raised in the community of Grand Riviere, Dennery. Joanne had longed for a way to marry her community with her skill.

The fully certified massage therapist had grown weary of utilising her talents on the hotel circuit and after an interview with a leading hotel chain in which she impressed; Joanne decided right then and there it was time to take the big plunge. “I saw the set-up and thought to myself, I can do that and offer a bit more”, she said.

It was with that fearless attitude, in a few months, that her small spa idea became the business known to many as Beauty Spot. Just off a busy highway, Beauty Spot’s interior cancels out the noise with some soothing music on entrance as you prepare to get spoilt. Apart from a relaxed atmosphere, Joanne’s Beauty Spot offers clients a wide range of affordable options to pamper themselves and according to her, “everyone needs at least ten minutes of pampering ever so often”.

Joanne admitted that she had a few detractors who encouraged her to reconsider her location, as it may not be as lucrative as she hoped. However, as a head strong young woman who believed in her community’s ability to appeal to a cross section of clients, she persevered and is now enjoying clients from as far as Cap Estate taking the half hour drive down to her spa.

It’s been a year now since Joanne opened the doors to her Spa and with some wise business moves and choices, she is the happiest she’s ever been. Her business continues to grow and what she is most proud of is how the word gets around of her little spot.

“Clients recommend the Spa to others by word of mouth and on social media,” a beaming Joanne told us gleefully.

As we were reliably informed by our well informed professional, in the age of endless stress and routine workloads, embracing the idea of self-relaxation and pampering should be on one’s to-do list at least once a month – and guys she means you too.