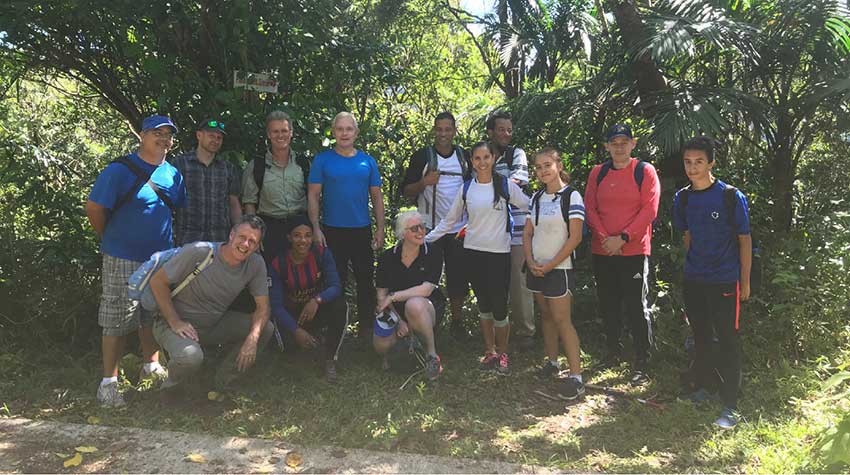 On Saturday, March 23, 2019, a group of 12 people representing embassies and consulates accredited in Saint Lucia dared to find out what it took to climb the highest mountain of the beautiful East Caribbean Island of Saint Lucia, Mount Gimie.

Led by outgoing Ambassador of the Bolivarian Republic of Venezuela, Leiff Escalona, who is also the Dean of the diplomatic corps, accompanied by her husband Domingo Ramos the group included the Ambassador of France, Phillip Ardanaz; the Ambassador of Cuba, Alejandro Simancas and his son, Darío Simancas; the Counselor of the Embassy of Mexico, David Simon, and his daughter Maryori Simon; the Cooperation Counselor for the Caribbean of the Embassy of France, Stephane Dovert, PoliticalScience Intern, Mrs. Blandine Pocquet; the Honorary Consul of Austria and Switzerland, Wagner Konrad and his friend from Canada, Rob Enns; journalist and writer Guyana-born Stan Bishop, the guides Marva Williams and Chad Williams of Saint Lucia, as well as the officers of the Special Service Unit, Hart Descartes, Julianus Felix, Kervin Joseph, Francilla Cherubin, Godwin Fontenelle, and Emmanuel.

With the support of the Minister with responsibility for External Affairs of Saint Lucia, Honourable Sarah Flood Beaubrun (who guaranteed the support with the transportation and the officers who would accompany in the walk) and with the organization of the Dean of the Diplomatic Corps, Ambassador of Venezuela, Leiff Escalona, it was possible to organize this visit. Members of the diplomatic corps, family and friends, gathered at the Bay Walk Mall at 6 a.m. to meet Mr. Hilary Calixte, who would be responsible for driving and transferring the group to Soufriere and then to the entrance of Mount Gimie. Two officers would walk all the way and the other four would be in the outskirts on standby ensuring that everything was in order.

After meeting the officers and guides that would be

part of the adventure, at 10 a.m. 16 people began the hike of the idyllic mountain guided by Chad and Marva. The guides led the group through the majesty of Mother Nature to enjoy the landscape and wonders of the vegetation. An hour and a half later, the 12 adventurers, two officers and two guides, arrived at a beautiful river at which point one of the climbers, satisfied with the extent of his climb, decided to make his way back to the bottom with Marva and an officer.

The rest of the group, now made up of 13 people, continued the hike until they reached the top of the highest mountain in Saint Lucia, Mount Gimie, over 950 metres high.

No one expected the path they had to travel through the complex mountain, with dangerous ups and downs, slippery ground, fallen trees, ferns full of fresh water, humidity, swamp, rocks and roots, which took most of them into deep reflection, navigating through falls, laughter, laments, but always looking for a way to take another step to reach the top.

At 1:10 p.m., the first eight comrades, representing Venezuela, Austria, Canada, France and Guyana and guide Chad, reached the summit. For about 50 minutes they contemplated the beauty of the unsurpassed view of the whole island that can be seen from the top. With jokes, photographs and snacks they waited for the second group until 2:15 p.m. to avoid being taken by nightfall they decided to start the return.

Minutes after the first group began to descend, at 2:30 pm. The five missing comrades, representatives of Cuba and Mexico and an officer arrived at the top. Chad, the Venezuelan ambassador and her husband stayed to return with the second group.

After a hard return, with tired legs and little water, at 6 p.m. the first group finished the adventure from the majestic mountain, but the second group started the return from the peak at 3 p.m. and the darkness of the mountain took them between 6:30 p.m. and 7:30 p.m. The officers who did not make the journey and Marva who had returned early with one member of the group, returned to the mountain with lanterns to rescue those who had remained in the dark in the mountains. Step by step, little by little, with patience and perseverance, they finished the hike, all very tired but at the same time happy to have shared the majesty of Mount Gimie.

Special thanks to everyone who contributed to this beautiful experience in Saint Lucia, Hon. Sarah Flood Beaubrun, H.E Elma Isaac, Wendy Brown, Nisha Paul, Officer O Bryan, among others.