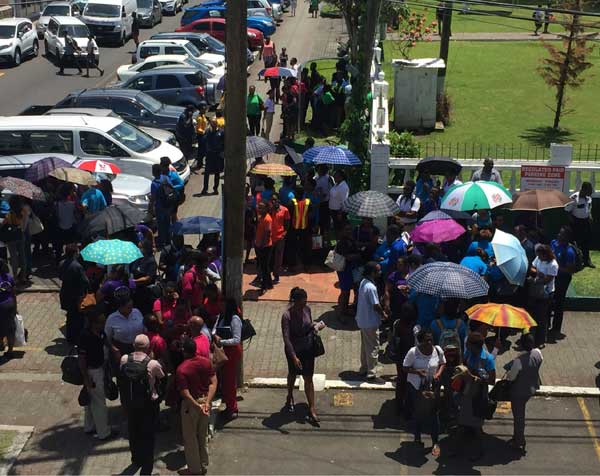 BUSINESS operations were shut down on Bridge Street, on the morning of Friday March 29th, due to yet another bomb hoax. Staff from First Caribbean Bank were seen gathered near Constitution Park at about 10:45 a.m. Caution tape first prevented civilian access from the William Peter Boulevard onto Bridge Street. Minutes later, significant police presence was noticed on Bridge Street, and by 11:10 a.m. everyone on Bridge Street was asked to evacuate. Spectators on the scene regarded the evacuation exercise as the largest they had seen in relation to a bomb threat.

More caution tape was brought out, and Bridge Street was blocked off from its cross-section with Brazil Street down to Jeremy Street. A number of people very casually exited the area with very little to no sense of urgency. Some persons on an ATM cue were annoyed when police officers asked them to vacate the area, for they preferred to complete their transactions before paying attention to the potential danger (even though an officer had announced that there were “bomb scares” in the area.) Even police officers from the Immigration Department were asked to evacuate.

The staff from 1st National Bank congregated at the Square, where a member of staff was seen commending the security guard, Samuel Eugene for doing a good job during the evacuation procedure. Rumours on the streets regarding the event quickly circulated in the absence of fact. After the all-clear was given, a police officer revealed that there had been a series of bomb hoaxes on Bridge St. The institutions which allegedly received the phone calls were Bank of St. Lucia, FirstCaribbean Bank, 1st National Bank, FICS Financial and the Farmers’ Credit Union.

A number of on-lookers dismissed the policing of the area as ‘pappyshow’, insistent that it was not possible for there to be a bomb in St. Lucia. One officer responded, “You’ll waiting for it to happen before you’ll take it seriously.” The investigation on St. Lucia’s latest bomb hoax is currently ongoing.