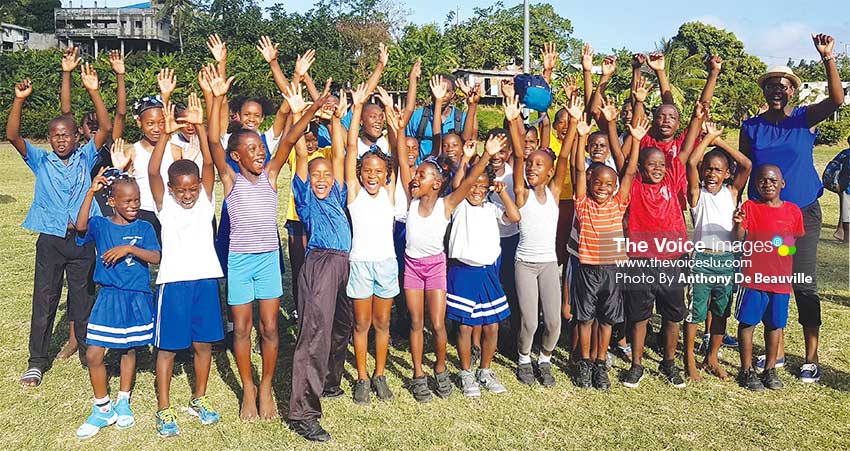 IT was worth the travelling on Wednesday 20th March 2019 for the 25th edition of the District 5 Sports Meet at the La Ressource playing field in Dennery. The event has been described as a huge success by the organizers and of course the participating athletes representing Dennery Infant/ Primary Schools as they celebrated their championship victory when the final scores were announced.

Weather conditions were humid as Mother Nature spared no mercy on the young ones as they showcased their talents on the running surface. Dennery Infant and Primary amassed 269 points; 18 points clear of second place Ti Rocher Combined (251 points). In third place was Richfond Combined with 231 points, fourth Micoud Primary with 223 points and to round off the top five spots, Derniere Riviere Combined trailing with 196 points.

The day started with the March Past of the teams followed by prayers, the National Anthem and an address by Gabrielle St. Paul, District 5 Education Officer (DEO).

In welcoming the students/athletes the DEO emphasized the importance of sports in their everyday life. She said the Mission for the district is to develop the students holistically.

She expressed, “We do not only focus on education… we do sports, we do music and we think it is very important. Children of today need to have some passion – something they love, and something that they can follow.”

St. Paul urged the athletes to put their best foot forward and to give their all to the competition. She also encouraged every student to be part of what was happening and for those who could not compete, “be good supporters”. With the high rate of diabetes in Saint Lucia, the District felt it necessary to have their Keep Fit classes prior to the sports meet.

In terms of the actual performance on the track, the DEO said, “It was exceptional. We saw keen competition and the students were all enthusiastic. They were running with everything they had. District 5 is passionate about sports; sports are giving our students the opportunity to express themselves in a different way.”

Sports Coordinator, Education District 5, Nerville Florence said, “The event was well organized, and based on the level of competition exhibited by the athletes and coming out of this championship, in the not to distance future District 5 will be producing some outstanding athletes on the national scene as we continue to grow from strength to strength.”

Speaking of preparation for the Inter Primary School Finals at the Daren Sammy Cricket Ground, Florence left no stone unturned. “We have sufficient time to prepare. We’re in second place chasing down District 6. They should expect District 5 to come out and put on a real challenge on the day,” he noted.

Florence took time out to thank all the sports committee members, the physical education teachers in the District, including the DEO, Gabrielle St. Paul. “St. Paul has been supportive throughout ensuring everything went on smoothly. The parents must also be commended for their continued support for the event.”