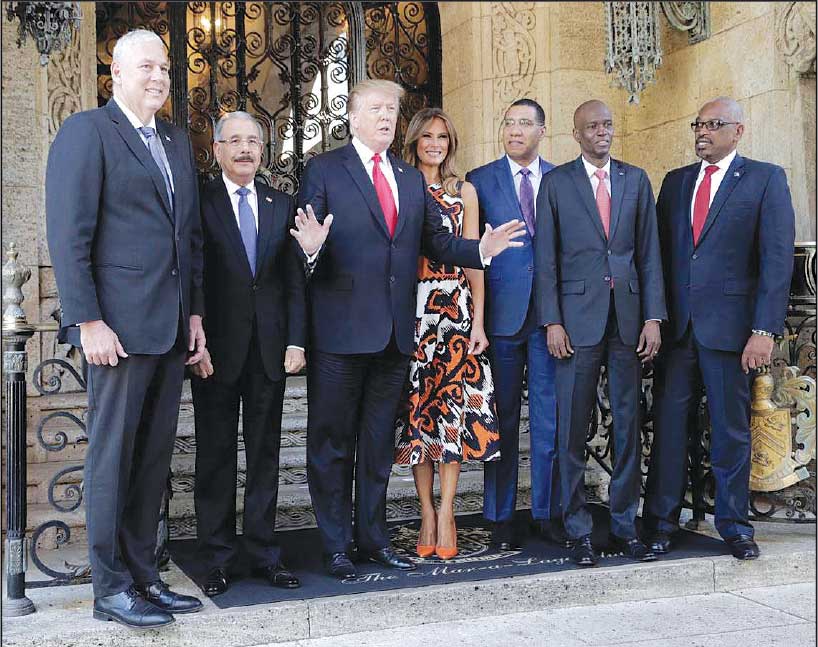 The Caribbean’s media spent the entire weekend fruitlessly scouring the world’s media for news on what came out of Friday’s unofficial Mar-a-Lago summit between President Donald Trump and five Caribbean leaders.

Most would have found it hard to believe that the US President meeting with not one but five leaders of other nations would have been at least five times as important the usual bilateral summit. But Israel’s Prime Minister Benjamin Nethanyahu was also in town – and that was bigger news in America.

Even if some knew better – starting with the fact that this was not a formal summit meeting — many did not giving up trying. But they also had much reason to believe – as they eventually fund out – they were in fact hoping against hope.

Here are 15 reasons why:

First, many old and /or experienced enough in Caribbean affairs know that short of factors like needing support for armed intervention elsewhere (like in Grenada in 1983); the US Establishment hardly cares anything about the English-speaking CARICOM member-states.

Second, among the five leaders meeting the US president in Florida was the president of Haiti, a country that the host less than one year earlier gained international criticism for describing the oldest Black Republic in the world as “a shithole country”.

Third, the five leaders did not represent CARICOM; and four belong to the Lima Group that supports, promotes and implements Washington’s agenda on Venezuela at the Organization of American States (OAS) – and within CARICOM.

Fifth, the Lima Group’s positions on Venezuela are diametrically opposed to that of CARICOM, which took a collective position last month (February) to support dialogue and peace, without external intervention, through the Montevideo Mechanism, a four-point approach that includes CARICOM and Mexico working with the United Nations and the relevant stakeholders in Venezuela to chart a course for dialogue, agreement, commitment and verification.

Sixth, by President Trump inviting only those CARICOM member-states that voted in support of the US-backed OAS resolution in January 2019 and the Caribbean leaders concerned together unilaterally accepting to meet the war-minded US president unofficially at his Florida Golf Course resort, the attending Caribbean leaders were clearly signaling their common support for further deepening the fracture caused within the OAS and CARICOM over Venezuela by Washington, through the Lima Group, with Canadian and European Union (EU) backing.

Seventh, CARICOM member-states that don’t support US intervention take more than just deep umbrage to the fact that some others would sign-up to CARICOM’s collective position of non-interference in Venezuela and then back foreign interventionist approaches and have been speaking out quite loudly, with St Vincent and the Grenadines Prime Minister Dr Ralph Gonsalves and Trinidad & Tobago’s Prime Minister Dr Keith Rowle

y both telling the world how troubled they were about some Caribbean leaders openly breaking ranks after agreeing on a principled and united, peaceful approach to Venezuela.

Eighth, with US attention mainly on the impending revelations over the weekend of the findings of the Mueller Inquiry report, the mainstream US media was less interested in the US president meeting with leaders of five small nations fitting his categorical characterization of ‘shithole countries’.

Ninth, the little that seeped into and out of the Florida press about the Mar-a-Lago parley was mainly critical of the leaders, most items quoting representatives of the US-based Caribbean Diaspora that’s squarely opposed to and threatened by President Trump’s immigration policies.

Tenth, the Saint Lucia Prime Minister, Allen Chastanet, expressed delight about what he saw as the first resurgence of US interest in investing in the Caribbean since Ronald Reagan, only to be corrected by those who recalled that Reagan’ Caribbean Basin Initiative (CBI) never benefitted the CARICOM region; and there were several subsequent presidential initiatives by presidents Bush, Clinton and Obama aimed at the region, none of which have in almost four decades resulted in greater US investments in CARICOM.

Eleventh, while the five Caribbean leaders were still remaining tight-lipped on exactly what they agreed on in Florida about Venezuela, Canada was able to get CARICOM to agree to host, by teleconference on the same weekend, a meeting of CARICOM Foreign Affairs Ministers in Barbados (Sunday, March 24) with the US-backed ‘Interim President’ of Venezuela Juan Guaido, who had months earlier rejected CARICOM’s Montevideo Mechanism, saying ‘The time for talking is over.’

Twelfth, CARICOM member-states opposed to foreign intervention, while glad that Guaido has come around to talk to the region’s 15-member grouping, realize that this is more as a result more of US and Canadian intervention and not necessarily any indication that Guaido has any particular interest in the development of the English-speaking Caribbean.

Thirteenth, most CARICOM member-states (except Trinidad & Tobago, Barbados and Saint Lucia) owe Venezuela under the PetroCaribe Agreement, which is now wrecked by US sanctions on Venezuela’s oil industry; and while Caracas under Maduro is willing to continue the generous initiative, there’s no such guarantee that Guaido would not immediately formally terminate PetroCaribe if he became President, in keeping with the ultimate US objective of not only controlling Venezuela’s vast oil reserves (largest in the world and more than Saudi Arabia) and replacing the Caribbean’s ‘dependence’ on PetroCaribe by hooking the region up to US natural gas – a proposal rejected by 13 CARICOM leaders in 2016 after being offered by then US Vice President Joe Biden, who had officially summoned them to Washington.

Fourteenth, while the US press was obsessed with the Mueller Report and the implications of President Trump’s recognition of the Golan Heights for the future of Arab-Israeli relations, the attention of the rest of the world was also on Britain’s Brexit Blues, the Thai elections, the effects of Cyclone Edai on Mozambique, the aftermath of the Boeing crashes in Indonesia and Ethiopia, the New Zealand massacre – and closer to home, the arrest of former Brazilian President Michel Temer for his role in the country’s biggest corruption scandal dubbed ‘Operation  Carwash’ that has already seen popular ex-President ‘Lula’ De Silva imprisoned just ahead of a presidential election he was sure to win.

Fifteenth, while the eyes of the rest of the world was everywhere else on the weekend, China and Russia were making it absolutely clear to the USA where they stand on Venezuela today: China refused to issue visas for rival Venezuela representatives (appointed by President Maduro and US-backed Guaido) at an Inter-American Development Bank (IDB) meeting in Chengdu, leading to the meeting’s cancelation; and Russia told the US point man on Venezuela, former State department official Elliott Abrams, at a meeting in Madrid, that military intervention in Venezuela was ‘a red line’ not to be crossed.

In light of all the above, one cannot be surprised that the US press and the rest of the world’s mainstream media were not the least interested in the rare and normally positive headline of a US president hosting five other leaders at the same time.

It didn’t seem to matter to the rest of the world that if President Trump gets to exercise his military option, it could lead to the start of the Third World War in the Caribbean Basin, the closest in can be to the US mainland, in an age when weapons of mass destruction are both nuclear and more technologically advanced than in 1983, when the US invaded Grenada.

So, is the Caribbean, once again, in the absence of the real story of what went down between the US President and the five Caribbean leaders on March 22 in Palm Beach, being prepared, by and through external actors, to provide the proverbial fig leaf that Washington will so badly need to justify any unpopular action in or against Venezuela that will not be supported by the OAS or CARICOM?

In essence, the real question being asked by Caribbean and Latin American political and media observers is: Is the Lima Group the new US trump card in the Caribbean?

The answer seems clear as crystal.