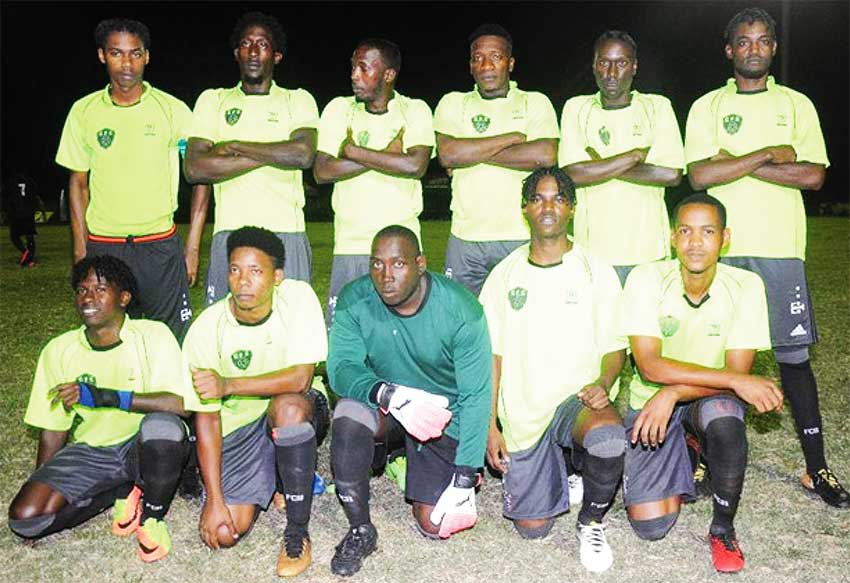 THE La Resource playing field in Mabouya Valley comes alive this evening (Saturday 16th March 2019) as hundreds of football fans from near and far converge at the sporting facility to take in the 11th edition of the DJ Dongar/Mackeson Invitational Cup third place playoff and finals.

From 6 p.m. the third place playoff will kick off between On the Rock Strikers (Dennery) and Survival FC (Mabouya Valley).

The grand final is scheduled at 8 p.m. and it is anticipated by then only standing room will be available. Contesting the much anticipated final are Piton Travel Young Stars (Dennery) and Chesters FC (Mabouya Valley).

This past weekend (Saturday 9th) in semifinal action, Game 1, Piton Travel Young Stars defeated On the Rock Strikers 2 – 0 to book their place in the final.

Both goals were scored by the prolific striker Ridel Stanislaus in the 55th and 76th minutes of play.

It was Stanislaus’ fourth goal in three matches.

In the second semifinal dubbed a “Mabouya Valley Derby” Chesters FC won by a similar margin as they breezed past their neighbours Survivals FC 2-0.

Mitchel Edan put Chesters ahead in the 17th minute of play – despite Survivals FC’ several attempts to equalize; Chesters FC was still able to hold on to their 1-0 lead at the halftime whistle.

On the resumption, both teams came out firing at each other at either end of the pitch. Chesters FC seized the advantage as Mitchel Edan made it 2-0 in the 70th to seal victory and book his team’s passage to the final for the first time.

Following the encounter an elated Chesters FC Assistant Coach, Alvin Faucher said, “I am very happy for the win as that is the first time we made it through to the finals of the DJ Dongar/ Mackeson Invitational Cup. The first time Chesters FC participated in the tournament we played Survivals and they got the better of us, but this time around we were victorious. I am happy for the boys.”

When asked how he felt about playing Piton Travel Young Stars in the final Faucher replied, “I believe they are a very good team; they have been playing together for a very long time. In fact, this is the third time they are in the finals. We are not going to take things lightly or take them for granted on the night.”

“I think our overall preparation is showing on the pitch,” Faucher said. “We began eight weeks ago before the tournament was officially launched. The tournament is very good, bringing people together from the different communities as they come to support their respective teams and the sport of football.”

Tournament official Hendricks Constable gave a bird’s eye view on the semifinals and what to expect this evening: “Semifinals night, no surprise. After Rovers got knocked out, Piton Travel Young Stars going through and Chesters FC’ outstanding performance in the last two games against Praslin Bay they are really a different team this year.”

In terms of the coaching, Chesters FC has been brilliant; they have come a long way,” he added. “Piton Travel Young Stars have been in contention for the past three or four years and I think may have won the finals on two occasions. As a result this evening the many football enthusiasts coming to take in the showpiece should be looking at a wonderful final.”

When asked whether there was any doubt in his mind who the two best teams are in the final this evening, Constable said without hesitation, “There’s no doubt. This evening we are going to have a great, if not one of the best, finals at the La Ressource playing field.”

Meanwhile, Tournament organizer and the man behind the scenes, DJ Dongar Mc Donald, a man of a few words said, “I am very satisfied with the way things have gone thus far. The final is expected to be an eye catching one. Piton Travel Young Stars were inaugural winners eleven years ago; they were also finalists last year. It’s Chesters FC’ first time in the finals and much is expected from them as they will be playing on home turf.”

In terms of support to the two finalists, Mc Donald said, “I remain neutral. May the best team win on the night.”