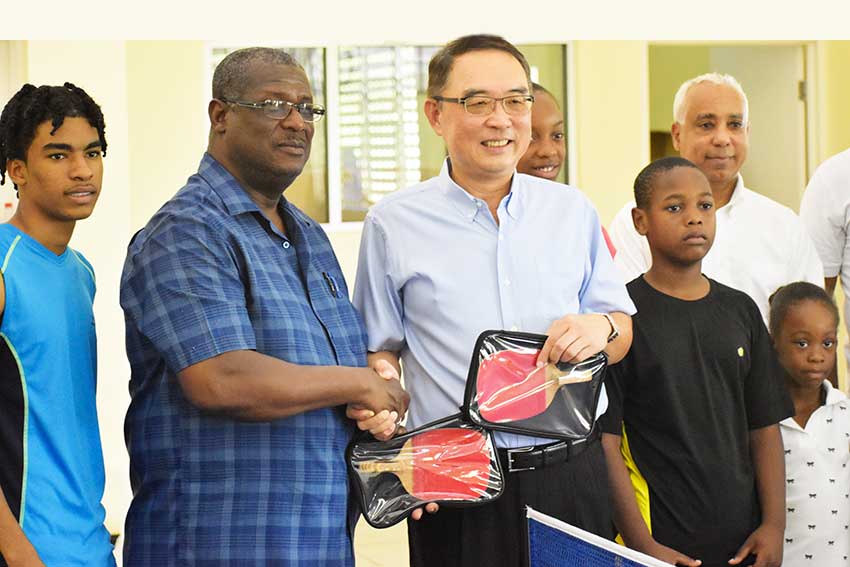 Member of Parliament for Castries North Honorable Stephenson King has yet again delivered on another promise to constituents, with assistance from the Taiwanese Embassy.

On Friday January 4, King received a donation of table tennis equipment on behalf of the Chase Gardens/Carielle Table-Tennis Club. The donation was sponsored by the Government of Taiwan and presented by Ambassador H: E Douglas Shen.

Ambassador Shen said the donation further demonstrates Taiwan`s genuine commitment to supporting the growth and advancement of the Saint Lucian people. He also announced the offer of an annual scholarship to young Saint Lucians who excel academically and in the sport of table tennis.
The sport of table tennis Improves hand-eye coordination, stimulates mental alertness and concentration and develops mental acuity.

The Parliamentary Representative lamented that the donation of equipment is a very important investment in the youth of Castries North. As an avid player him, King expressed optimism that the seeds planted, will flourish with the rise of highly skilled professional table-tennis players from Chase Gardens, Carielle and neighboring communities.

He also extended heartfelt gratitude to the Taiwanese Government, Ambassador and his team for responding to the request for assistance in making this dream a reality.

Taiwan is ranked as one of the world`s best table tennis nations.