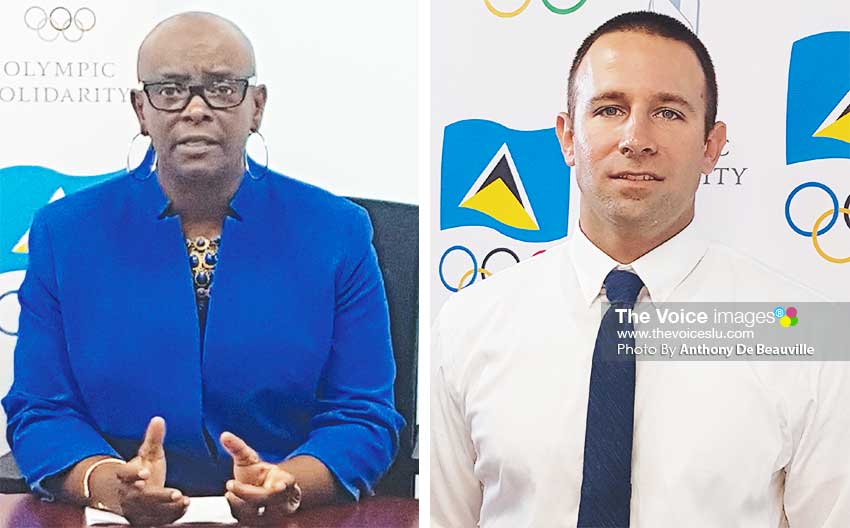 THE Saint Lucia Olympic Committee Incorporated hosted its first press briefings at its Headquarters in La Clery on Tuesday 15th January 2019. The event which saw the SLOC Inc. making a formal announcement and introduction of a contracted Project Development Officer who is about to start a stint with the organisation.

Addressing the gathering was SLOC President Fortuna Belrose who said, “We began our journey in 1992-93 as members of the IOC and over the years we have strengthened our programmes to ensure that we put Saint Lucia on the map.”

The SLOC Chief said, “We have a programme that facilitates and guides the development of sports in Saint Lucia to a larger extent since 2013 we have been able to stay focussed on that mission. In 2015 we were able to realise a space that would allow us to do more than we were doing before. Having realized that space with the support of International Olympic Committee (IOC) and the Pan American Games Organization it was important for us to strengthen our own capacity to be able to deliver on the programmes that we are capable of.”

According to Belrose, Behl focus while at the SLOC headquarters, Behl will be assisting in conducting assessments; assisting the SLOC in the development of its strategic plan for the next 5 to 10 years; assisting with providing technical support to the SLOC affiliates to enable them to become better and stronger at what they do.

The former American Peace Corp Volunteer Andy Behl is no stranger to Saint Lucia, having had a long association with Sporting and Community life in Saint Lucia especially in Mon Repos. He has taken up a two year posting with the Saint Lucia Olympic Committee Incorporated (SLOC Inc) as its Project Development Officer.

Behl said, ” Here in Saint Lucia we are still fighting to get over the tipping point, we have had a lot of success in terms of specific athletes reaching high levels in sports at the current level of operation and the current level of efficiency which we govern sport. I am here to work with the SLOC, the affiliates, to increase the efficiency, the strategy and effectiveness of whatever organization is trying to do across the country in terms of getting athletes higher and higher towards the podium at various levels in the international arena.”

“I look forward to bringing my passion, my working experience on the ground here and some perspectives from overseas. A key aspect of my work will be working hand in hand with all the affiliates, opening up lines of communication and dialogue and serve as a conduit between them and the Olympic Committee to better understand the resources that are available whilst helping the Committee to even further understand the challenges and goals that our affiliates have.” Noted Behl.

In the question and answer segment, the SLOC Boss was asked by the VOICE reporter, whether the post for Project Development Officer was advertised?

Belrose reply, “Oh Yes, we did advertise for almost two months, we had the position available it was done wide spread on social media and the newspaper.”

In terms of individual’s interest, she said, “Six persons showed an interest. The shortlist is what we were interested in. We put a panel together from within together with the SLOC to scrutinize the shortlisted people and then we interviewed them, Andy Behl emerged from that list.”

“Within the IOC, what you are looking for is people with perspective on the outside, with the experience, who understand sports; Andy has worked with the United States Olympic Committee (USOC), he also worked in Singapore with Elite athletes, he understands what it is we are looking for when it comes to be an Olympian and it’s important for us to use his strength along with what we have here to help us realise the goals that we want.”

For the interest of the Saint Lucian public; how much money Pan American Organization is putting into this programme for the next two years?

Belrose: “Pan Am has issued us a special project for $267,000.00 and that special project involves consultant fees, it involves the development of physical structures/ facilities. We will be providing some support to some of our associations to enable them to develop the areas that they have. The overall cost of the project is about $267,000 of which Andy Behl’s project the consultancy/ services will be $84,000 in any one year.”

Meanwhile, the SLOC will today (Thursday 17th) stage its second press briefing for this week at its La Clery headquarters and according to Belrose, “The Olympic Solidary scholarships just came through so during the press briefing she will be announcing the recipients. Also on the cards, the SLOC will be looking at its performances under review for 2018.