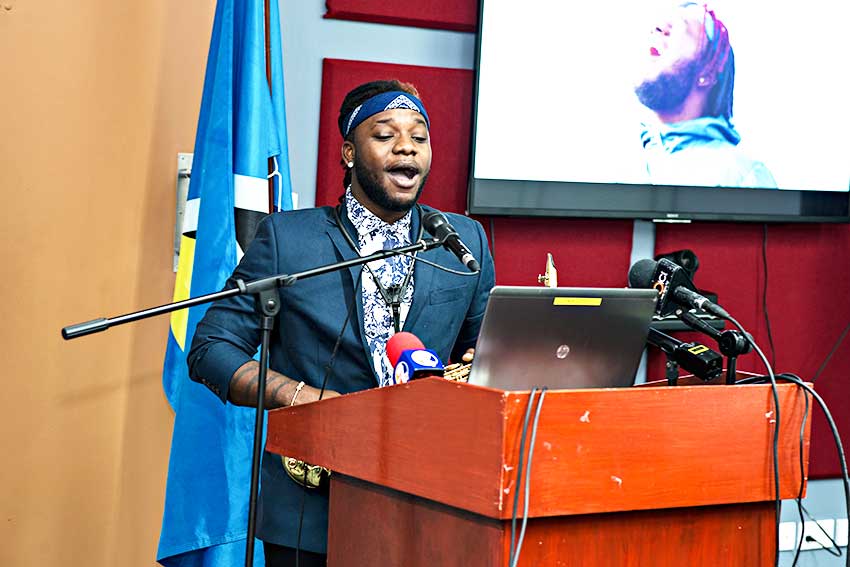 Activities for the celebration of Saint Lucia’s 40th Independence Anniversary are well underway. And while February 22, 2019 will mark the date forty years ago, when Saint Lucia gained political independence from Great Britain in 1979, the island was launched into a year-long celebration sincelast December.

The theme for Independence 40 is “All in, our Journey, our Future.”

According to Senator Fortuna Belrose who is the Minister with responsibility for Culture and Creative Industries,forty is a number of great significance and she called on Saint Lucians at home and abroad to celebrate the occasion with all the pomp and ceremony deserving of such an occasion.

“At forty,one is expected to be very mature and know exactly what they are about and where they are headed and our Fair Helen of the West is very clear of that direction,” the Minister said. She wasspeaking at a press event for Independence40, which was held at the Financial Center, Thursday January 10, 2019.

The Hon. Fortuna Belrose went on to say that Biblically, forty years is a story of deliverance. “So we know that there are many who have been caught in the wilderness, the wilderness of doubt and dependency, the wilderness of disbelief, and they do not have the confidence to move…,” she said. Independence40 according to Senator Belrose will be used as a vehicle to restore hope in our people, as she urged Saint Lucians at home and abroad to head the clarion call to be “all in” on the continued course to our nation’s development.

At the aforementioned press event, the details of a number of activities for Independence40 were explained in greater detail to the media. These included the 2019 Miss Independence pageant, The Strides of Unity Baton relay put on by the youth, the Story of Saint Lucia production directed by Dreina Frederick which will be staged on the eve of independence, the Legacy Calypso Concert on February 2, featuring a number of Calypso legends, as well as the Best of Saint Lucia Concert, among others.

Some activities for Independence 40 have already been held including the National Schools Music Festival on Jan 14 and the National Awards of Excellence put on by the Ministry of Education on Tuesday January 15.

Prayer, praise and worship is also central to the activities, beginning with a forty day National fast which got underway on January 14 and the ecumenical service on February 17, 2019.

The diaspora is also an integral part of the activities and through the Ministry of External Affairs the “Legacy Project” which involves sustainable community projects coordinated by various groupings in the diaspora, has also been launched.

The media was also given “live” taste of an independence40 video which was launched on December 12, 2018. It features the work of a number of talented young Saint Lucians, including Rashaad Joseph, Michael Robinson, Kayo, Teddyson John, Tori Elle,Curmiah Lisette and director Loggo Lionel.

The Independence40 committee is also very proud of its Social Media Ambassadors. Comprising young persons from all constituencies, they are working with the Marketing, Media and PR team to spread the word on all things related to Independence40, ensuring that we are indeed “all in.”