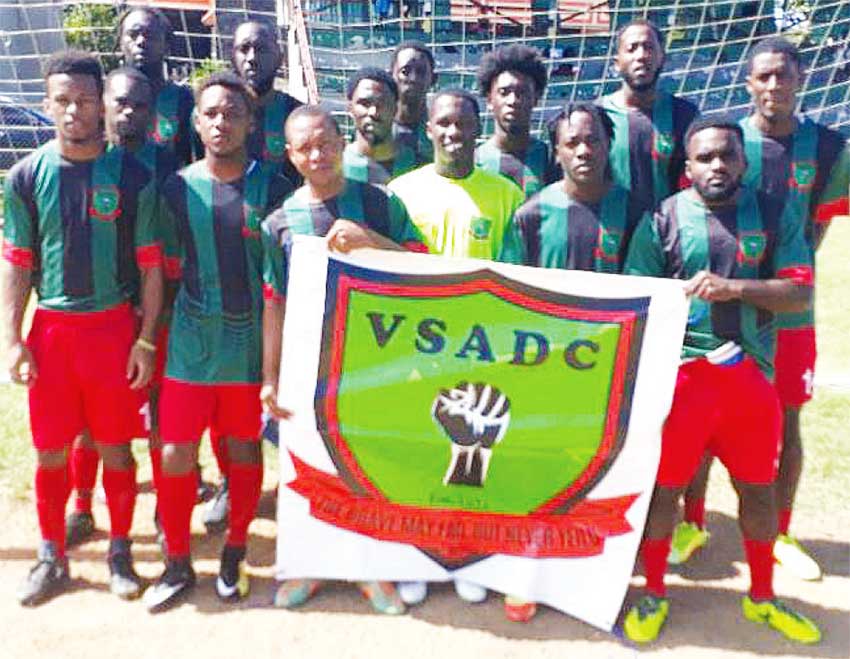 THERE is an old adage in some Saint Lucian sporting circles which goes this way, ‘After you are gone to the great beyond, that’s when they look to honour you after you have served your club, community and country.’ Well, this was not the case for the Vempers Sports Athletic Dramatic Club (VSADC) on Sunday 16th December 2018.

Under the scorching heat, the club took the time out to honour its long-time kit and equipment manager Hephburn “RasJaho” Jn. Marie by staging the inaugural “RasJaho” Inter Club Football Cup at the Sab playing facility.

The event can be best described as a celebratory tournament to honour Jn Marie’s contribution, as it took the form of 45-minutes games among the VSADC Under -21, senior and veterans teams.

Jn Marie, a former national player who has for decades served as VSADC’s equipment manager, often arriving at the Sab Sporting Facility before dawn on mornings and also before the afternoon sessions, to put out the training gear and equipment, laying down or picking up markers, retrieving balls, acting as the chief cook at club barbecues or substituting as a goal keeper in drills where goalkeepers are needed.

In fact, his exploits in the goal during shooting drills have earned him the affectionate moniker of Barthez among the older VSADC players. On match days Jn. Marie ensures that all uniforms are laid out for the team, he also takes care of the water cooler and any other tasks assigned to him by the respective team coaches.

On the pitch, in the first match VSADC veterans featuring former national players; Trevor “Flecky” Anderson, Davidson Belizaire, Gilroy Mitchell, Mathias Jules, Rufus Martyr and Barnett Bledman put on a courageous display as they were able to hold off the VSADC senior team to a goalless draw. Trevor Anderson was particularly impressive as he was able to control the midfield with his usual commanding style.

In the second match, it was a case of the fresh legs of youth getting the better of the experienced heads as the Under-21 team as they easily handled the veterans by a score of 3-0. The first goal for the U21 resulted from a patient sequence of play involving at least seventeen passes and a through ball which allowed Keyshawn Menal son of former VSADC basketball standout Vincent Prospere to slot home into the empty net. The energy of the U21’s proved too much as the veterans slumped to a 3 -0 defeat.

Despite losing this encounter, the veteran team did enjoy good passages of play with Rufus Martyr in particular having his way with the juniors on the left wing. An interesting side note of this game was VSADC U21 coach Greg Mathurin getting the better of his more experienced uncle Trevor ‘Flecky’ Anderson who is the player coach for the veterans team.

In the championship decider the VSADC U21 raced out to a 2-0 lead over the VSADC senior team on the back of slick midfield play and relentless pressing of the opposition. They were all but assured of winning the inaugural ‘RasJaho’ Cup until a penalty which converted by senior team captain Kennedy Duncan unnerved them and reduced the score to 2-1. Claude James levelled the scores at 2-2, a result which would allow the U21 to win the tournament. However, James netted an exquisite direct free kick seconds before the final whistle to allow the VSADC senior team to claim the first ever ‘RasJaho’ Cup.

After the tournament the club members of VSADC not only thanked Jn. Marie but also presented him with a financial contribution as show of their deep appreciation for his unbroken dedication to the club at all levels.