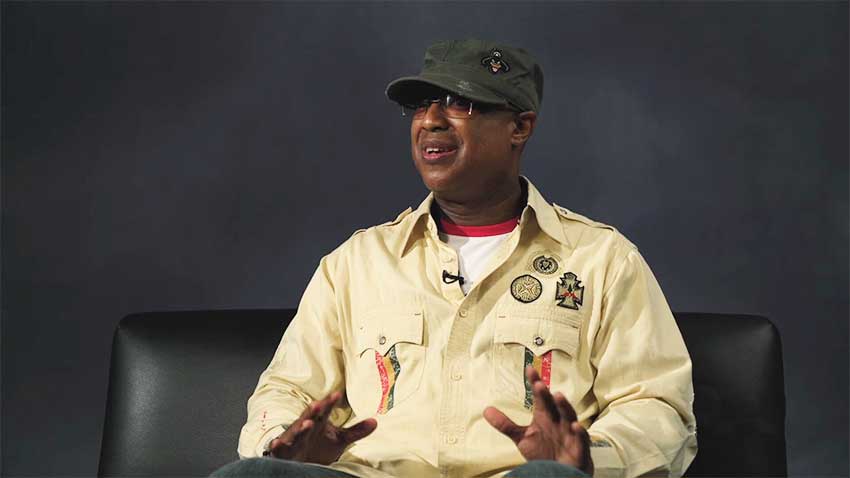 A PROFESSIONAL and mentorship relationship with Saint Lucian drummer Marvalon “Stixx” Mitchell has fast-tracked a visit to the island by Grammy acclaimed music engineer and producer Gordon Williams.

Williams, known in the music Industry as “The Commissioner”, is in Saint Lucia on a mission to re-establish a connection with his mother’s birthplace and assess the potential to help facilitate growth opportunities for Saint Lucia’s music industry.

“The Commissioner’s list of professional associations and projects include a number of international music chart toppers like Lauryn Hill, Babyface, Quincy Jones, Wyclef Jean, Amy Winehouse, Santana and The Marleys. He has also worked with Motown Records and later A&R at Sony Music Entertainment as Senior Director. His substantial portfolio has earned him seven Grammy Awards and numerous gold and platinum albums. His label duties have involved looking after major names like Alicia Keys, Wyclef Jean and 50 Cent.

One of Mr. Williams’ key philanthropic pursuits is professional mentorship and youth development using music as a platform.

His vision is to extend the reach of his music academy ‘Lalabela’ to Saint Lucia, ultimately creating an ecosystem in which beneficiaries are co-opted to give back through mentorship.

“So, I see the opportunity to be a catalyst at both a social level and an economic level for the industry here,” Mr. Williams said.

During his one week visit, Mr. Williams has been engaging major stakeholders on matters of mutual interest.

The Cultural Development Foundation (CDF) is playing a facilitating role in forging connections with key industry stakeholders at the ministerial and agency levels, as well as with local artistes and producers.

According to CDF’s Executive Director, the timing of Mr. Williams’ visit to Saint Lucia and expression of interest in establishing links with the sector ‘providence’.

One of CDF’s programme priorities “continues to be training and development, certification and the continuous professionalization of the sector both to encourage the unbridled creativity and innovation of our artists, and to reinforce the relationship between standards and marketability; so we are excited about the possibilities,” Mrs. Wynne concluded.

On Wednesday, 21st November, the Commissioner, alongside musician and vocal coach DajlaLalia and Saint Lucian drummer, Marvalon “Stixx” Mitchell held a symposium at the CDF’s Conference Room, during which time they engaged song writers, producers and other music creatives in a discussion on various aspects of the Music Industry.

The dialogue included (but was not limited to) music, publishing and copyright, contracts, professional development and maintaining success in a rapidly-changing industry.