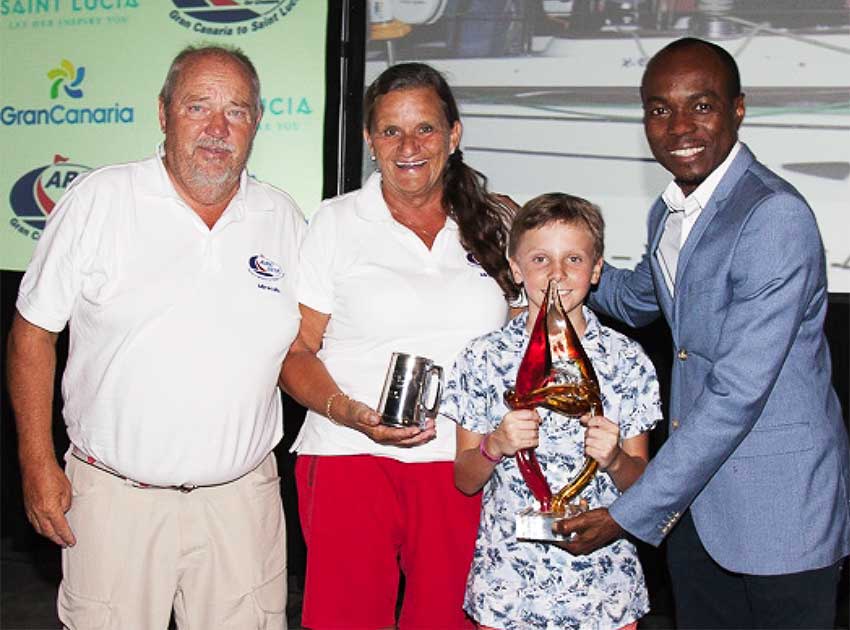 THE curtains came down on the 2018 Atlantic Rally for Cruisers (ARC) on Saturday evening with the Prize giving Ceremony marking the end of the world’s most popular sailing rally for another year.

Crews, friends and families were joined by numerous supporters at the Beausejour Indoor Practice Facility (BIPF) to enjoy an evening of celebration, not only to recognise the achievements of those who placed well in their respective classes but everyone who shared in the spirit of the ARC adventure in 2018.

Earlier in the day, true rally spirit swept through IGY Rodney Bay Marina as the final arrival made landfall. The smallest boat from the fleet, Halmatic 30 Excalibur arrived just hours before the Prize giving Ceremony and it was an emotional moment for Tim and Caitriona who sailed double-handed. They were welcomed to their berth with rapturous cheers from their fellow crews, and received a standing ovation during the Prizegiving Ceremony honouring their achievement.

It is often said that there is no ‘typical’ ARC however ARC 2018 will certainly be remembered as a ‘classic’. Consistent ENE trade winds have been blowing almost from the day of departure from Las Palmas and enabled the fleet to enjoy some great downwind sailing steadily counting down the miles to Rodney Bay. With the exception of a few squalls on their final approach, it has been an easy year for the navigators to simply point toward The Pitons and on average boats arrived one or two days earlier than usual, eager to stretch their land-legs and explore Saint Lucia.

Leading the ARC arrivals and collecting the award for Line Honours for the Racing Division and winner of Class A at the Prizegiving Ceremony was French sailing legend JP Dick and his crew from The Kid. Whilst their crossing was not record-breaking, the JP54 surfed across the Atlantic in just over 11 days to cross the line in Rodney Bay and they enjoyed spinnaker sailing all the way.

Perennial ARC Class B Winner Scarlet Oyster were delighted that their performance was enough to top the Racing Division overall, “Whilst a class win is nice, an overall win is nicer!” said Ross Applebey, skipper of the Oyster Lightwave 48. “The Kid sailed a good race with hugely impressive speeds, however the dead running conditions forced them to sail some significant extra distance opening the door just a crack for an old lady like Scarlet to have a chance of the overall trophy!”

For the Multihulls, winner of the Division overall and Class B was Lagoon 42-2 Ice Cat from Poland. Rounding off their ten year circumnavigation in real style, Eric and Tamara Barto sailed their Aikane 56 Sea Child to the top spot of Class A.

Another familiar face to the ARC, sailing the rally every two years, took home the biggest prize in the Cruising Division. The German classic Peter von Seestermühe won their Class (E) and collected the Jimmy Cornell Trophy for placing highest Overall in the Cruising Division. In fact, it was a busy evening for skipper Christoph Von Reibnitz visiting the stage no less than four times during the night. He was also recognised for his contribution to the SBB Radio Net, and the Henry Gruber 1936 yawl was awarded ‘Most Beautiful Yacht in the ARC’ as voted for by fellow crews.

The ARC’s presence in Saint Lucia has been firmly felt around the Caribbean island and the Prizegiving Ceremony also gave the opportunity to thank local supporters who have provided an exceptional welcome to participants. IGY Rodney Bay Marina General Manager Sean Deveaux and Tessa Joseph for Events Company Saint Lucia both said a few words, and Hon. Dominic Fedee, Minister for Tourism, Information and Broadcasting gave an enthusiastic speech highlighting the importance of the rally to the island and the exciting developments in store for Saint Lucia in the future.

Some of the biggest cheers of the night came for crews who were recognised for their achievements and contributions to the overall rally atmosphere with special prizes awarded including the Double-handed Award, Senior Cup and Family Boat awards, along with accolades for Best Logs, the Fishing Competition and recognition for the Radio Net Controllers and Finish Line volunteers.

The only all-female crew in the ARC this year, the Ocean Ladies from Finland took home the Arch Marez Trophy, awarded to the yacht that best displays the partying spirit that Rodney Bay Marina founder Arch Marez embodied.

The first Korean-flagged yacht ever to sail with the ARC, Adagio, received the Kaprys Award of overcoming adversity, signing up to the rally only days before departure and working tirelessly to ensure the boat was ready for the crossing.

The Spirit of the ARC award was, as usual, saved for last. Each year it is awarded to the yacht that best displays the general spirit of goodwill and enthusiasm that the rally creates amongst the fleet.

This year, it was in fact awarded to a boat who had gone to the aid of a damaged yacht sailing outside of the ARC fleet. Whilst not part of the rally, when yacht Second Wind reported that they had been struck by a whale, the four man crew of Seren stood by whilst the strike damage and rudder stock problem were assessed. They then selflessly sailed in company for the remainder of the crossing, finally giving further support having crossed the finish line by acting as a relay until the arranged tow for Second Wind was under control and the boat was safely hauled out. In total, they stood by Second Wind for eleven days, offering reassuring support to her crew who joined Seren on stage as they collected their award.

After thanking the dedication of the helpers from the Saint Lucia Tourism Authority, Events Company Saint Lucia, and the staff at IGY Rodney Bay Marina, plus all the ARC sponsors, Andrew Bishop and his team were offered a standing ovation and cheers from the crowd. Providing a fitting end to a hugely successful rally, the steel-pan band rounded off the evening playing classics and Christmas carols as crews departed Beausejour.