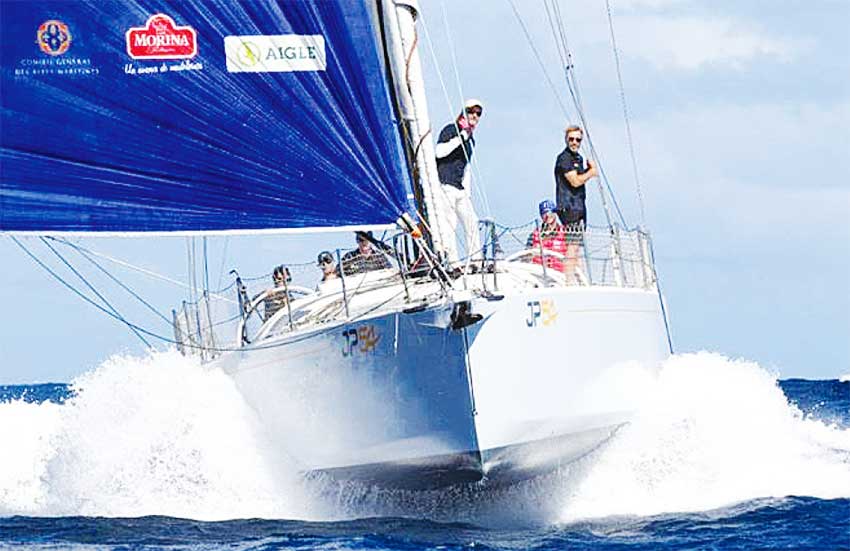 “MARVELLOUS! Downwind all the way with the spinnaker,” said Jean-Pierre ‘JP’ Dick, the owner and skipper for ‘The Kid’, the first boat to arrive in Saint Lucia on the direct Atlantic Rally for Cruisers (ARC) route from Las Palmas.

The JP54 surfed across the Atlantic in just over 11 days to cross the line in Rodney Bay Saint Lucia at 12:52 local time on Thursday 6th December, giving her an elapsed time of 11 days 4 hours 07 minutes and 49 seconds and sailing 3254.5 nautical miles.

The six strong crew which include five men and one woman were in great spirits as they arrived at the dockside at Island Global Yachting (IGY) in Rodney Bay Marina and toasted their ARC line honours success, with ice cold Saint Lucian rum punch.

“We had the spinnaker up all the way; it was great fun!” enthused crew member David Hoey, originally from Ireland and the only non-French member of the crew. He explained some of the challenges of the trip “We hit a top speed of 25 knots and had to be very careful to keep control of the boat all of the time as the spinnaker is so big.”

Wind conditions for the ARC this year have been excellent, with consistent trade winds almost all of the route. “Our lowest winds were around 16-17 knots, which were only in the last couple of days” said David.

The Kid is the first of 170 boats arriving on the ARC direct route with the next closest boat – super yacht G2. Most boats crossing this year will take between 16 and 21 days to make the passage to Saint Lucia.

According to World Cruising Club (WCC) a number of ARC boats are expected to cross the finish line in Rodney Bay this weekend taking the overall total to at least 12; while 72 out of the 78 ARC+ boats have crossed the finished line with the balance expected sometime this weekend or early next week.