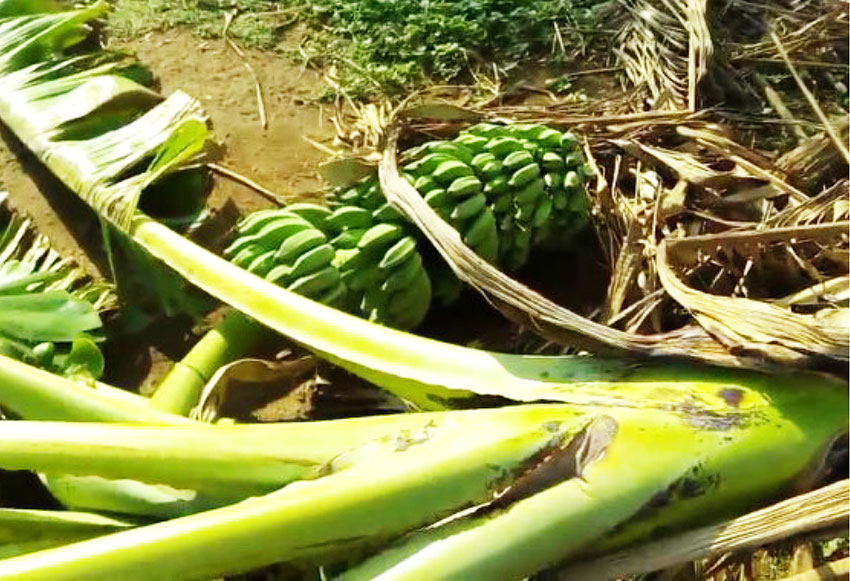 The Director of Meteorological Services in the Government of Saint Lucia, Mr Venantius Descarte says the country could learn from the lessons that emerged from the 2018 hurricane season, which damaged the agricultural sector and the structure of some schools.

He called on Saint Lucians to be more attentive to the early warning calls when made by institutions like NEMO (National Emergency Management Office) and to drop that level of complacency they do have about an approaching weather system.

“What we’ve realized over the past years is that anytime there is a big impact weather event we have interruptions in communication, notably the internet would always go down,” he said.

Adding that most of the communications equipment at the Department of Meteorological Services depend on the internet to function, Director Descarte suggested another form of communication apparatus that would bypass “the system of internet that we have”.

Another area the authorities should focus on, and which was made clear by the just concluded hurricane season, is the need to have a technician on hand to rectify whatever problem that could arise during a storm.

According to Descarte technical problems can develop anytime during a storm, hence the need to have a technician on hand. He gave the example of a time during a weather event this year when a problem occurred with a wind instrument at the George Charles Airport, however luckily a technician was on hand who was able to put the equipment back into operation.

That wind instrument was located near the runway to provide data relevant to the airstrip for aviation purposes. It so happened that during the time the equipment was being repaired a handheld anemometer was used until the piece of equipment was repaired.

“It is also necessary to have backup equipment,” Descarte said.

Another lesson the 2018 hurricane season taught the country, according to Descarte, is the need for a staff contingency plan should an emergency arise during a storm.

“Sometimes what we do at the Meteorological Services is to invoke a registry roster where we double the number of officers and we allow for them to work for 12 hours,” he said.

But what after working such hours the replacements for those employees do not arrive on time forcing them to stay on the job longer?

Descarte said there should be something in place so those workers would know what to do if they have to continue longer in their posts because they really cannot abandon the job.

This year’s hurricane season will be remembered for two hurricanes, Florence and Michael, which caused significant damage to the Southeastern United States.

The season produced 15 named storms which included eight hurricanes out of which came the two major ones named above. There was also a tropical depression, number 11, which did not reach tropical storm strength.

Descarte noted that the season was more active than predicted and the fourth consecutive year hurricane activity begun prior to the official start of the season. This year it began May 25 with the formation of Hurricane Alberto. In Saint Lucia the hurricane season starts June 1 and ends November 30.

The month of September was the most prominent in that it produced about six named storms, however early in the season the country experienced below average rainfalls and near normal temperatures. All that changed when on the 27 and 28 September, Tropical Storm Kirk hit Saint Lucia dead on. Not long after heavy rains on 10 and 11 November soaked the country causing flooding in some areas.

Tropical Storm Kirk was predominantly a wind event with the island recording winds of up to 40 knots and gusts up to 50 knots during its passage. Rainfall amounts were not very high, just about 28 millimeters recorded at Hewanorra Airport and 28.4 millimeters at George Charles Airport.

However Kirk’s impact, mainly in the agricultural sector, was significant as it caused that sector to experience an 80 percent loss according to preliminary estimates coming from banana farms and other farms involved in other crops. The storm caused disruption to the electrical and telecommunication services in the country and caused the closure of schools for a few days.

The heavy rainfall on the 10 and 11 November dumped in excess of 200 millimeters of rain over most of the island with over 70 millimeters recorded within a three-hour period.

As the country enters what is known as the dry season the first three months – December, January and February – are expected to produce below normal rainfall.

“We are transitioning from the wet season to the dry season and the forecast is showing there will be below normal rainfall so water availability may become an issue,” Descarte said, adding that the temperature outlook for the three months is showing above normal which could be of concern.