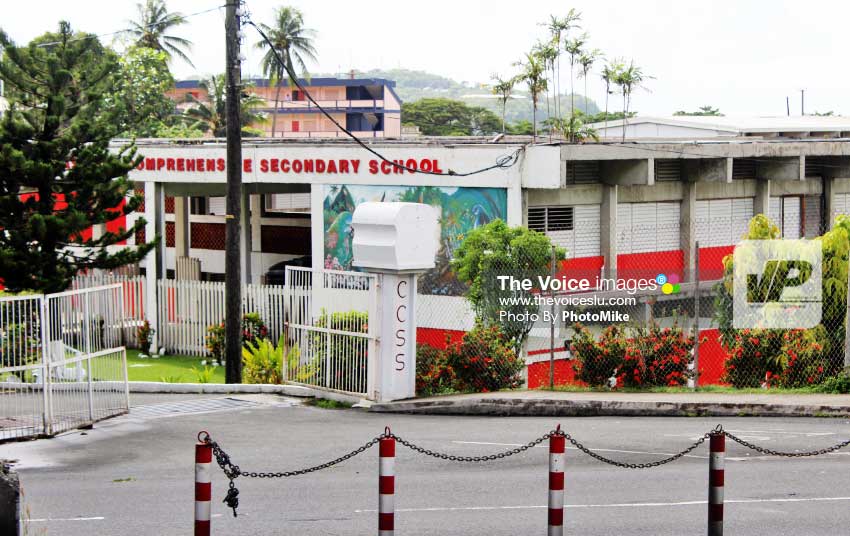 PRIME Minister Allen Chastanet on Tuesday ended rumours of a possible relocation of the 44-year-old Castries Comprehensive Secondary School (CCSS) by his government. But in so doing, he might just also have also raised the stakes on another matter — speculation of possible ‘conflict of interest’ claims being levelled, should the school be removed.

The matter of the school’s probable removal from its present Choc location — to parts unknown — first surfaced in the ‘One Caribbean’ newspaper, which The VOICE sought clarification about from the government.

But the report was quickly shot down by government operatives as a non-news item. The Prime Minister’s Senior Communications Officer Nicole McDonald categorically denied that the school may be sold to private interests for hotel construction.

However, just before entering parliament building on Tuesday (this week) for a meeting of the House of Assembly, Chastanet told reporters that his government is in fact considering a possible relocation of the school, which was delivered in 1974 as a gift to the people of Saint Lucia by the Canadian Government.

“There is an option of possibly moving the Castries Comprehensive Secondary School, but no decision has been made,” Chastanet said, noting that it would be irresponsible on the part of his government “if we do not give it due consideration.”

He said that the Minister for Education will be leading the analysis on whether to relocate the school, with the District Representative in parliament (Castries North MP Stephenson King) having a considerable amount of say “as to what we are going to do.”

“Fact is, it is on beach property land, the site has problems with traffic and safety for the students,” he said, hinting at possible reasons for government’s consideration for relocating the school.

It has been proven that his father and father-in-law own lands bordering that the school sits on.

“Whether my father or father-in-law own land never came into any consideration. They have owned those lands from long ago. This has nothing to do with it,” Chastanet said.

It seems that the cost associated with carrying out repairs to the school is what prompted government to take another look at the CCSS and consider moving it from its present location, which would mean constructing a new building.

The prime minister said that government would have to spend in excess of $13 million in repairs to the school, adding that it is in bad shape.

“If you have to build a new school — knowing what you know today — would you build it in that location? And so, that’s the evaluation that government is undertaking,” Chastanet said.

The One Caribbean report – in an editorial by Editor D. St. Clair DaBreo – claimed the editor (DaBreo) had irrefutable reports from reliable sources that the government was in talks with three un-named persons regarding construction of a hotel to replace the school.

Neither the Prime Minister, nor his Senior Communications Officer have addressed the claim that the government has been discussing a sale of the gift school.